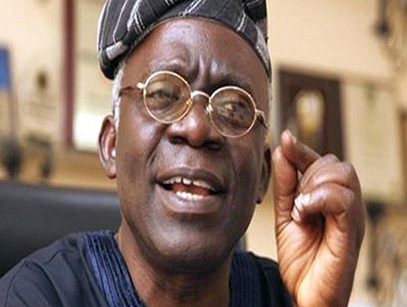 Activist lawyer Femi Falana (SAN) yesterday said President Muhammadu Buhari’s administration knows those causing unrest in the country and should go after them.

Falana spoke at the Coalition for Revolution’s (CORE’s) working consultative assembly, with the theme: Democracy, State Repression and The State of Insecurity in Nigeria, at the Lagos Centre, Oregun, Ikeja.

The event, which was billed to start at 11 a.m, did not hold due to police disruption.

It was learnt that policemen barricaded the venue and arrested three participants.

Condemning the alleged arrest as well as that of Omoyele Sowore and other #RevolutionNow protesters, Falana said the Federal Government should deploy security forces to tackle terrorism, banditry, kidnapping and other crimes that breach public peace, and not protesters.

The lawyer said it was the struggle by democracy agitators that culminated in the democracy the current administration was turning into a rickety civil rule.

He said the agitators would not allow it.

Falana said: “Our right to assembly and associate peacefully in the country is constitutional. I want to assure you that we are going to ensure that all the rights of Nigerian people that we have fought for and won will not be allowed to be eroded by any regime in this country.

“I heard that about three persons have been arrested. But I want to assure you that after the programme, I will demand for their release because they have not committed any offence. I want to assure you that all those who were arrested and charged during the #RevolutionNow for unlawful assembly and breaching the peace will be given adequate defence at the court of law.

“We fought and defeated dictatorship under discredited and corrupt military rulers. It was the struggle that we waged that culminated in democracy which the ruling party has turned into a rickety civil rule. We are, therefore, not going to allow the emergence of any form of dictatorship in the country.

“The President Buhari administration knows those breaching the peace of the country: terrorist, armed robbers, coup plotters and others.

“Those who went to the street to protest in exercise of their right to assembly and complain against injustice, corruption and maladministration in the country cannot be said to have breached the law of the country.

“Therefore, the man (Sowore) who was arrested and detained before the protest will be adequately defended at the law court. This is because he has committed no offence.”

The lawyer reminded the gathering how Nigerians fought for their rights, even under the colonial era.

He recalled how nationalists, like the late Chief Anthony Enahoro, chaired lectures organised on the need for a revolution.

“So, let the authority in Abuja know that the call for revolution is not new in Nigeria. Political leaders in this country have over time called for revolution and they have never been arrested and prosecuted. If there is a mistake now, such must be corrected. This country belongs to all of us.

“Revolution is not a dinner party. It is a serious, rigorous and consistent battle for the soul of a country like Nigeria. Therefore, what we have done is a mere declaration of our resolve.

“The struggle is going to be in pains and it will require time. But I believe that we have started and there is no going back. What we have done is to challenge the Nigerian people to appreciate the enormity of crisis of underdevelopment that is confronting the country.

“We do not have a revolution yet in Nigeria, but there is revolutionary pressure in Nigeria. We must seize the advantage of the moment and mobilise Nigerians on the need for revolution: tell them that it will come sooner than later…”

Onovo said: “We understand how herdsmen have become the greatest threat overtaking Boko Haram. The government has failed and the leader of the government must resign. There is no democracy in Nigeria,” he said.

Awe said there was need to correct the bad things noticed in the country, adding that the time was right for a revolution.

For Kuti, the movement was fighting for the collective interest of Nigerians and the country’s future.

Aborishade said: “The failure of government to provide employment violates the dictates of the constitution. President Buhari is criminalising the rights of the people. If they say that I am a terrorist for asking for free medical care for the masses, free education for all, then, I am guilty for that and will like to be prosecuted.

“I demand that Sowore and others be released by the government. Nigeria has been turned to prison. We will ensure that the citizens enjoy the tenets of democracy. The law is taller than the President. I refuse to live in any society that is governed by the whims and caprices of the President and not the constitution. We reject enslavement.”

But the police denied obstructing the gathering or arresting anyone.

They said they were at the venue to maintain the peace.

Deputy Commissioner of Police (DCP) in charge of Operations Mohammed Ali told The Nation on phone that it was normal to deploy policemen to avoid any breakdown of law and order.

“It is not true that the police disrupted their gathering. They were billed to have a press conference and they did. There was no disruption whatsoever, and I do not have information of any arrest there,” he said.