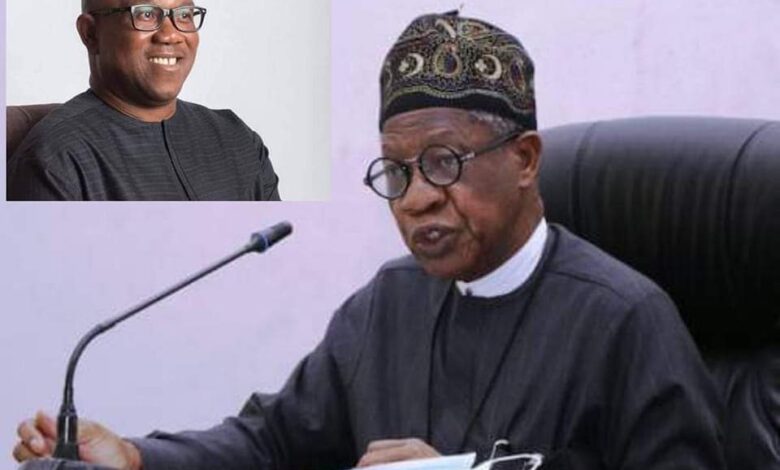 The professionals under the platform of Coalition of Nigeria Professionals for Good Governance (CNPGG), have called out the Minister of Information and Culture, Lai Mohammed, over a statement credited to him to the effect that the October, 2020 EndSARS protest, was allegedly sponsored by the Presidential candidate of the Labour Party (LP), Mr. Peter Obi.

According to some online reports, Mohammed was said to have claimed that most of the young men and women that were at the forefront of the EndSARS Movement, are currently campaigning for the LP flag-bearer on Twitter, and other influential social media platforms.

But CNPGG insisted that the EndSARS protest was a consequence of bad governance, occasioned by insecurity, youth unemployment, poverty and police brutality.

According to them, the fact that the Minister had yet to deny the vexatious report credited to him more than twenty-four hours after, suggests that he, indeed, authored it.

In the said report, Mohammed was quoted to have said: “Recent development has now unveiled the brain behind ENDSARS Protest in Nigeria which led to the destruction of Government properties and security agencies losing their lives.

“Over the years, investigation has been going on in order to unveil those behind this wicked act just to tarnish the good image of President Muhammadu Buhari and his good works.

“Mostly all the people and the misguided youths who championed the ENDSARS Protest are all campaigning for Peter Obi for President. All of them, no exception. That will go a long way in telling you that Peter Obi knows much about the ENDSARS Protest and those behind that ugly act must be brought to book to face disciplinary actions.

Reacting, in a statement jointly signed Dr Ado Manir (National President), and Dr Mrs Modupe Olalekan Mohammed (National Secretary), the Coalition said the unusual campaign was a spontaneous expression of frustration, disillusionment, and anger by concerned youths, who feared that the ship of state was navigating dangerously towards a precipice.

According to the coalition, the youths, in their wisdom, initiated the movement, which was anchored on the urgent need to disband the then dreaded Special Anti-Robbery Squad (SARS), an elite unit of the Nigeria Police, which carried out serial abuses.

The statement read: “Our attention has been drawn to a press statement credited to the Minister of Information and Culture, Mr. Lai Mohammed, which is currently trending on some social and traditional media platforms, alleging that the presidential candidate of Labour Party, Mr. Peter Obi, was the brain behind the EndSARS campaign that rocked the nation in October, 2020.

“We are surprised that the minister has not denied the report that is vexatious in nature, and patently false in content, several days after.

“This development is suggestive of the fact that he may have actually authored the unpatriotic and irresponsible statement, which flies in the face of reason and valued judgement.

“Nigerians know that the LP presidential candidate, is a fine gentleman, whose uncommon patriotism is exemplified in his commitment to the Nigerian Project; a characteristic that is unparalleled.

“While we are not holding brief for Peter Obi and his campaign organisation, as concerned Nigerians with vested interest in the Nigerian project, we will not be silent in the face of deliberate attempt at blackmailing a quintessential politician that the LP standard-bearer is”.

It continued: “The EndSARS campaign was a carefully-planned and executed protest by frustrated and disillusioned Nigerians, who were, and have continued to be angry with the bad governance of the All Progressives Congress (APC)-led government, which Lai Mohammed, incidentally, typifies.

“The APC project is one that is characterised by failed promises and arrogance of power, which Lai Mohammed embodies.

“It is curious that a man, who apologised personally and on behalf of the Nigerian Government for their failure, would now have the audacity to blame Peter Obi for instigating the famous EndSARS protest.

“Nigerians are tired of insecurity and bad governance hence they have moved to take back their country from the likes of Lai Mohammed and his collaborators, and no amount of blackmail can stop the movement of a new and progressive Nigeria with Peter Obi as the captain.

“We, therefore, call on Nigerians to remain steadfast and focused, as more campaigns of calumny against the captain of the “forward Nigeria Project”, are expected in the coming weeks,and months leading to the February, 2023 presidential election”

Tension as herdsmen fight over missing cows in Imo

No Twitter deal without clarity on spam accounts – Musk