Raid on Odili’s Residence: We Shall Resist Clandestine Attempts to Silence Us, CJN Warns 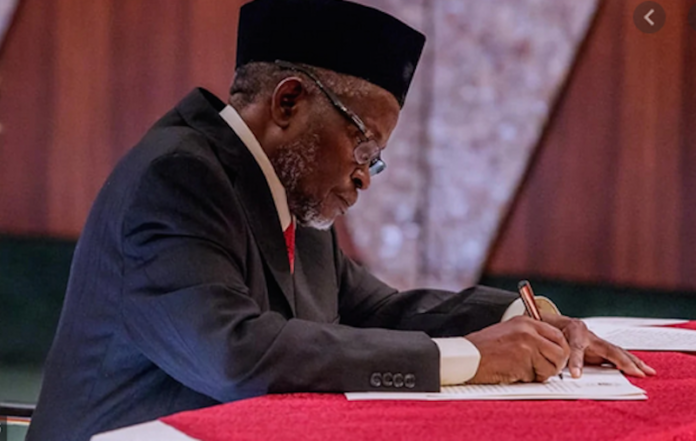 The Chief Justice of Nigeria (CJN), Justice Ibrahim Muhammad, yesterday issued a strong warning that the judiciary would begin to rise up against what he described as, “clandestine attempt” to silent it in the discharge of its lawful judicial functions.

The CJN spoke against the recent raid on the residence of the second most senior Justice of the Supreme Court, Mary Peter-Odili, by alleged security operatives.

Justice Muhammad who said the judiciary would begin to assert itself so as to become the pride of the nation, stated that the judiciary has had enough of embarrassment of its judicial officers and would no longer take it kindly in the event of any repeat of the ugly treatment to judges from security operatives.

He spoke in Abuja, during the conferment of the rank of Senior Advocate of Nigeria (SAN) on 72 lawyers as well as the commencement of the 2021/2022 legal year of the Supreme Court.

This was just as the President of the Court of Appeal, Justice Monica Dongban-Mensem yesterday disclosed that in its bid to tackle the challenge occasioned by the COVID-19 pandemic, the court delivered a total sum of 528 judgments, via Zoom, a virtual meeting platform in the immediate past legal year of the court.

According to Muhammad, the silence of the judiciary should never be mistaken for stupidity or weakness.

“On a very sad note, I must say, we were jolted with embarrassingly news of the invasion of the official residence of one of our brother Justices, Hon Justice Mary Peter Odili on Friday October 29 by men suspected to be security operatives, acting on a search warrant.

“The said warrant was purportedly obtained from an Abuja Magistrate court under questionable circumstances.

“I must make it known to all and sundry that we have had enough dosage of such embarrassment and harassment of our judicial officers across the country and we can no longer take any of such shenanigans.

“The silence of the judiciary should never be mistaken for stupidity or weakness”, he said.

“We shall begin to resist any clandestine attempt to silence or ridicule us to oblivion. Nigeria, to the best of my knowledge is not a lawless society. We should begin to do things that will project is favourably and rightly too, to the international community.

“No law permits anyone to invade, subdue or overawe any Nigerian citizen in his or her residence with a flimsy, fraudulently obtained search warrant,” he added.

The CJN noted that by the nature of their work, judicial officers are conservative but not conquered species and should not be pushed further by any individual, institution or agency of the government.

He assured that soon, those taking judiciary as a mere weakling would soon realise that it was, “from the calmest seas we often experience the fiercest storms.”

He therefore stated that, “No one, irrespective of his or her status or position in the country, should test our will because the consequences of such unwarranted provocation will be too dire to bear.

“We are making efforts now to ensure that henceforth, every search or arrest warrant must be issued with the knowledge and approval of the Chief Judge of the respective state or Federal High Court as the case may be”.

Continuing, the CJN said the new SANs have, in all ramifications and by all standards, excelled in the practice of law and subsequently conferred with the rank.

He equally used the opportunity to lament the setback caused by the protracted strike by the Judiciary Staff Union of Nigeria (JUSUN), saying it came with excruciating impact on smooth dispensation of justice.

In his remarks, the Attorney General of the Federation (AGF) and Minister of Justice, Mr Abubakar Malami, SAN, described the conferment of ‘SANship’ as a privilege.

Malami who praised the judiciary noted that the arm of government has continued to complement other arms of government in spite of emerging challenges foisted on it by COVID-19, insecurity and dwindling economy, saying the judiciary has helped in the preservation of the country’s hard earned democracy.

“I want to state categorically that the LPPC have done a good job by putting forward deserving and qualifying lawyers, saying they must ensure that due process is followed in subsequent selection,” Malami added.

Speaking further, Dongban-Mensem further disclosed that the court disposed of 5, 669 cases and 10, 798 motions in the same year.

She further explained that 10 hearings were also held by panels of the Court via Zoom, adding that in the last two months, a further 40 judgments were delivered via Zoom.

“The administration of justice remains the primary focus of the Court. As I stated during the Legal Year, the Learned Justices of the Court, without exception, have worked incredibly to improve justice delivery this year.

“As a result, we have had a 26.47 per cent reduction in the total volume of cases pending in our divisions, as compared with last year.

“In the face of incredible uncertainty such as the world has and is still experiencing, I am assured that the Court will rise to each and every challenge that will face us whether jurisprudentially or otherwise.

“We are committed to deepening the expeditious dispensation of justice and are not afraid to think out of the box in order to achieve it.

“This informs our pivot towards a technology driven system of justice, following the precedent set by the Chief Justice of Nigeria in the technological innovations introduced to the Supreme Court”, she said.

The president said that the development informed the amendment of the Court’s Rules of Practice in order to properly cater for this digital revolution.

She stated that the 2021-2022 legal year has begun with much greater confidence following the infusion of 18 new Justices to the Court of Appeal in the course of the year 2021.

“I remarked at the time of their appointment that they were joining a Family Court, which is close knit and fraternal. I can confidently state that my brother justices, when sitting as a panel, are a well-oiled machine.

“It was therefore important for our new learned brother justices to be properly oriented so as not to disrupt the course of the dispensation of justice.

“Having cut their teeth in the crucible of Special Panels and their various Stations, I am glad to state that our new Justices have proven their mettle and must be highly commended for their work”, she added.

She claimed that the court had to hear 198 motions and appeals, which according to her was commendable given that they sat in only six panels hearing an average of 33 matters per panel.