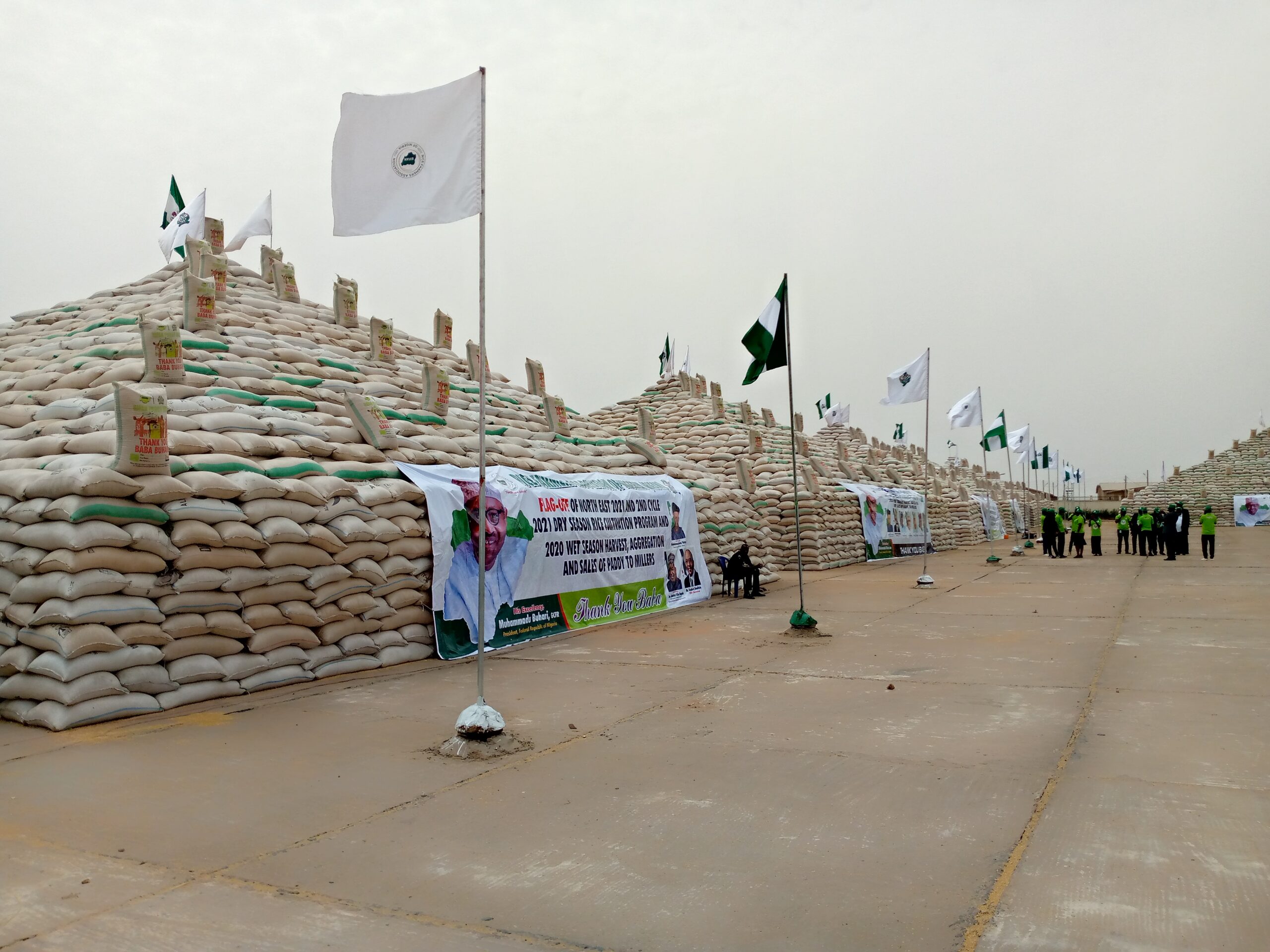 …as rice pyramids rise in Gombe

Central Bank of Nigeria, CBN Governor, Godwin Emefiele on Thursday vowed to make life difficult for those he said are hoardingand smuggling commodities in the country just as he announced that the Apex bank has successfully financed over  three million farmers.

Emefiele’s comment is coming on the heels of President Muhammadu Buhari’s assurance of the Federal Government continuous support to commodity farmers in the country in a bid to ensure the bumper harvest and tackle the smuggling of goods into the country.

Governor Of Kebbi State Abubakar Atiku Bagudu who represented the President disclosed this during the flag off of the Rice Farmers Association Of Nigeria 2021 flag off North east 2021 and second cycle 2021 dry season rice cultivation programme and 2020 wet season harvest aggregation and sales of paddies to millers.

The programme which was facilitated by the Central Bank Anchor Borrowers scheme saw the rise of rice pyramids contributed by states in the North East. 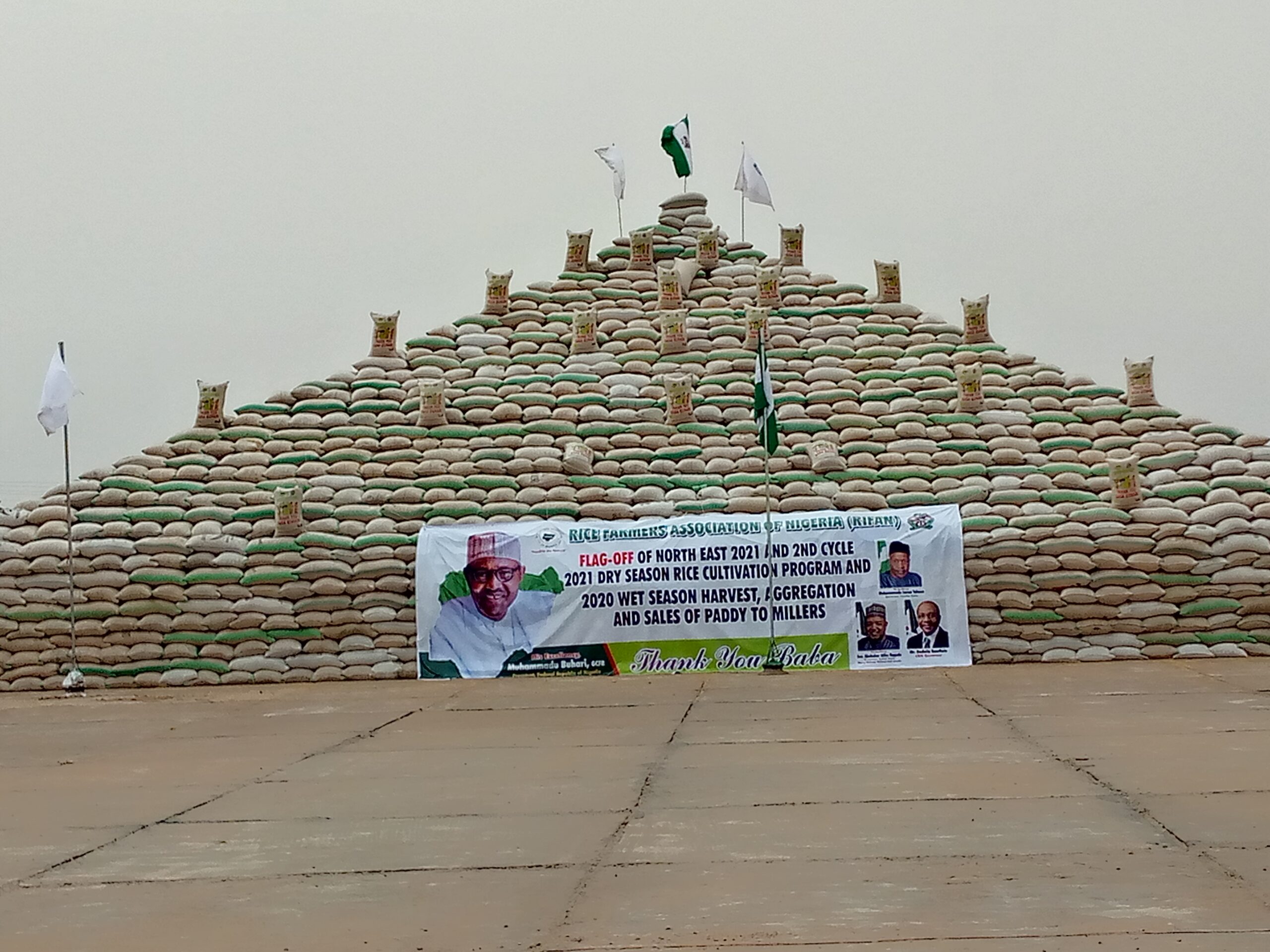 In his speech at the flag off of the programme, Emefiele said there is no need for anybody to panic as food prices are high because it is already coming down.

“We will make life difficult for those who feel they will want to hoarding commodities because they feel they want to take advantage of scarcity. We have been cultivating almost one million hectares during the dry season. Fortunately, the dry season affords us two seasons for rice so we will not have rice scarcity again. For those who think they can continue to smuggle rice into the country, we are sending a warning signal to you that you should desist from smuggling.

“Smuggling is a bad business. Snuggling undermines the progress of our economic plans and I will like to advise that you desist from that practice,” he said.

According to him, the CBN is also positioned to ensure the integration of the country farmers into the government economic sustainability program aimed at providing five million homes with electricity using solar energy.

He said under this program, every farmer under the CBN ANCOPS borrowers program is eligible to get the solar home system that will provide electricity to power their home appliances.

He added that the payment of the electricity consumed under this solar system being provided for the farmers can be paid using the produce from the farms.

Earlier, RIFAN president, Alhaji Aminu Goronyo in his address said there is no Nigerian home which does not consume rice in a day.

According to him, the quantity of rice consumed in Nigeria every morning is over N1.5 billion.

“What is consumed every morning in Nigeria as far as rice is concerned is more than N1.5 billion. From 2015 when the President declared that we must eat what we grow, the CBN took it over,” he said.

Goronyo added that from 2015 till date Nigeria has been growing what she consumed in respect of rice production.

He condemned the importation of foreign rice which he said has only succeeded in bringing foreign diseases into the country.

“The imported rice are kept in warehouses for a period of five to fifteen years using dangerous chemicals to preserve them. That is why many Nigerians are falling sick of diseases like cancer, diabetes, blindness and others. These are the results of eating chemicals which Nigerians do not know about,” he said.

Petrol price hike only after negotiation with labour — NNPC

NNPC generates N2.197tr from petrol sales in one year