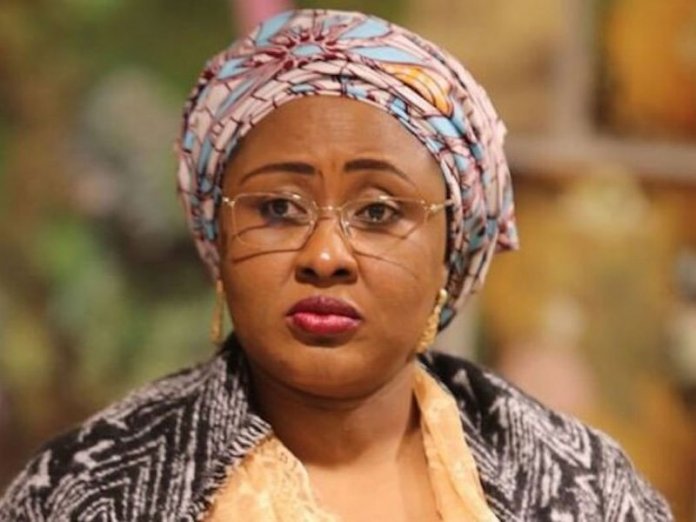 The First Lady, Mrs. Aisha Buhari, yesterday broke her silence since September last year, as she called for an end to the abduction of women and schoolgirls in her goodwill message to Nigerian women on International Women’s Day.

However, in his goodwill message, President Muhammadu Buhari condemned discrimination against women in their places of work based on their gender, saying despite the gender discrimination, women remain the bedrock of the society.

In her message titled, ‘Message of the First Lady, Federal Republic of Nigeria, Dr. Aisha Muhammadu Buhari, on the occasion of the International Women’s Day 2021,’ the first lady, who has not made public appearance since the wedding of her daughter, Hanan, last September, urged governments at all levels to end the abductions.

In the message posted on her Twitter handle, @Aishambuhari, Aisha raised the alarm that girl-child education is being negatively affected by the abductions of schoolgirls by bandits.

She said: “COVID-19 has had a huge impact on women; disrupted education and careers, lost jobs, descent into poverty, and proliferation of domestic violence. Many have also died or suffered due to lack of access to basic information on the pandemic.”

She added that it was important, not just to continue spreading the message of the COVID-19 protocol, but to remember and support those affected negatively by the pandemic.

“Away from COVID-19, women and girls in Nigeria have continued to suffer abductions both in the hands of insurgents and bandits.

“As a mother, I share the sorrow and agony of the victims and their families. I am also not unaware of the impact that these abductions could have in reverting many successes we have hitherto achieved, especially in terms of girl-child education and early marriages,” he added.

She called on all stakeholders to continue to exert their influence and find ways to end the abduction, as well as to ensure the safety of the girls, anywhere they may find themselves.

“My best wishes to women all over the world for their resilience, hard work and commitment to the progress of humanity. Happy International Women’s Day,” she said.

However, one of her aides, Mr. Kabiru Dodo, clarified that she was on a foreign medical trip.

Even when she turned 50 years on February 18, 2021, she remained silent and out of public range.

In his message to mark the occasion, President Muhammadu Buhari condemned discrimination against women in their places of work based on their gender.

The president, in a statement yesterday by his media adviser, Mr. Femi Adesina, however, said despite the gender discrimination, women remain the bedrock of the society.

Buhari, while condemning gender-based discriminations, abuse, harassment and violence targeted especially at the female folk at work places, schools, community and national levels, felicitated with Nigerian women on the day set aside to celebrate them, describing them as the bedrock of the society.

Noting that the theme of the 2021 celebration: “Choose to Challenge,” is apt, the president rejoiced with the womenfolk and reiterated his administration’s commitment to addressing the challenges confronting them.

The president, who has seven female ministers in his cabinet, with two of them heading strategic Ministry of Finance, Budget and National Planning as well as Humanitarian Affairs, Disaster Management and Social Development, in addition to scores more in charge of key parastatals and agencies, as well as serving as presidential aides, applauded their contributions to the success of the administration.

He said: “I am proud of our women who have shown by dint of hard work and capacity that they can perform creditably if given the opportunity at home and on the global stage.”

Buhari pledged further support towards female gender inclusiveness in all sectors of national life, stressing that women are key to a happy and stable family, society and nation.

He said any “government which neglects such a crucial component of its demographic asset, stands the risk of stunted growth and likely failure.”

Speaking on the theme: “Special Event on Gender Dimensions of Criminal Justice Responses to Terrorism” organised by the United Nations Office on Drug and Crime (UNODC), the minister stated that he inaugurated the Inter-Ministerial Management Committee on Eradication of Sexual and Gender-Based Violence last year with the hope that it would help Nigeria to address the crime.

Malami, in a statement by his media aide, Dr. Umar Gwandu, added that the Complex Case Group under his office leads in the efforts to bring suspected terrorists to justice and also work to include sexual violence-related charges against Boko Haram suspects in collaboration with the military, police and other security service investigators from the multi-agency Joint Investigation Centre, in North-east.

According to him, the current administration is aware that giving a voice to women is an important aspect of development as women are important agents of positive change.

Malami, however, expressed concern that terrorist groups continue to kidnap and commit sexual and gender-based violence against women and girls, adding that preventing such crimes and bringing those who commit them to justice remain a priority of the Buhari administration.

“Another emerging area of grave concern is the abduction and kidnapping of teenagers in boarding houses for ransom. The perpetrators targeted this group of people possibly to scare them from schooling. This is indeed a sad situation.

“The Nigerian Armed Forces and law enforcement agencies are working day and night to combat insecurity, terrorism, kidnapping and abduction of people in the country.

“We must work to prevent both male and female perpetrators from carrying out these acts and support those who have been victims,” he said.

The minister added that in partnership with UNODC as well as the European Union, the federal government launched the “Nigeria Training Module on Gender Dimensions in the Criminal Justice: Response to Terrorism”.

According to him, the module provides practical guidance based on Nigeria’s legal framework as well as international and African regional laws and good practices to support Nigerian officials in addressing the issues of gender in the counter-terrorism context.

He said the Nigerian National Action Plan for Preventing and Countering Violent Extremism acknowledged the important role women play not only as policy-makers and law enforcement officers, but also as wives and mothers in preventing violent extremism and in de-radicalisation, rehabilitation and reintegration of offenders.