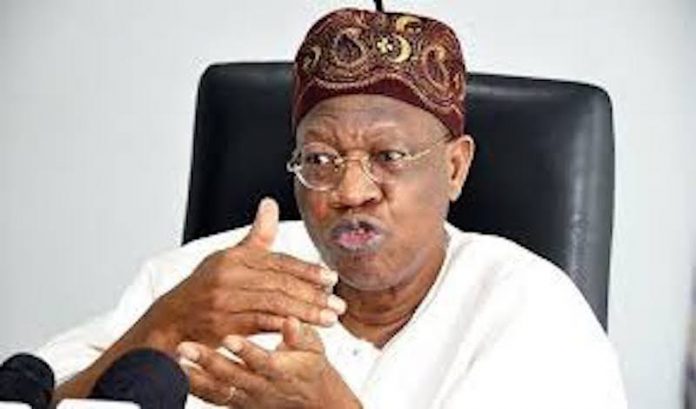 The Minister of Information and Culture, Alhaji Lai Mohammed, yesterday called for the immediate cancellation of the ongoing membership registration exercise of the All Progressives Congress(APC) in Kwara State, alleging that the exercise was marred by fraud and irregularities in the 16 local government areas of the state.

He called on the national leadership of the party to put in place a process that will ensure the conduct of a credible and fair exercise that will enjoy the support and confidence of all.

Speaking at a press conference in his home town, Oro, in Irepodun Local Government Area of the state shortly after revalidating his membership of the party, Mohammed also called for the immediate disbandment of the Senator John Danboyi-led membership registration committee for the state as a vast majority of the APC stakeholders in the state have lost confidence in the committee.

He called for the constitution of a fresh membership registration committee that is truly independent, non-compromised and sensitive to the delicate diverse interests in the party.

The minister also demanded a thorough investigation into the botched membership registration exercise by the Danboyi-led committee.

According to him, these demands are the irreducible minimum requirements for peace and progress in the Kwara APC.
He alleged that reports from the monitoring teams had shown that the whole exercise did not comply with the stipulated guidelines.

Mohammed said: “The guidelines stipulate consultation with all stakeholders by the registration officials from Abuja.

“After the botched attempt to have a meeting of stakeholders, due to orchestrated violence, the registration officials failed to consult with all stakeholders before the commencement of the membership registration exercise, opting instead to work with only one of the four tendencies here in Kwara – the Fagbemi group to which Governor AbdulRahman Abdulrazaq belongs, thus excluding the three other tendencies – the Akogun group, the Gbemi Saraki group and the Lai Mohammed group, without which the ‘O To Ge’ movement would not have succeeded.

“Also, the recruitment of officials for the registration has been a one-sided affair and indications are that the hand-picked officials are under strict orders from above as to how to carry out the exercise. We have evidence to corroborate this.”

The minister alleged that when the registration officials from Abuja landed in Ilorin, they handed over the registration materials to an individual, not recognised by the provisions of the guidelines, who has decided to hoard them instead of distributing them to the wards.

He said he was in possession of evidence to support his claim.

“The implication is that the registration is being carried out without a party membership register, while temporary membership slips, to be signed and detached from the forms after registration, are not being given to those who have purportedly registered,” he said.

He alleged that there is a clear indication yet that the police and other security agencies may be complicit in what he described as the mess being made of the membership registration in Kwara State.

According to him, instead of using the membership registers, the registration officials were using exercise books or foolscap sheets to register members.

Mohammed also claimed that members who have purportedly registered are being asked to come back for their registration slips, stressing that to date, no such member has been given the registration slip.

The minister further alleged that due to the shoddy and non-compliant mode of registration, using exercise books and foolscap sheets instead of the membership register, many members are unwilling to submit their personal details via such unsecured and illegal process.

He noted: “There seems a deliberate policy of exclusion by the registration team from Abuja and their collaborators. It seems there is a plan to de-register even high-ranking members and stakeholders who have not only paid their dues in the party, but also contributed to install the present government.”

Mohammed cited the registration unit of Senator Gbemi Saraki, Minister of State for Transportation, which is PU 005 at Ode-Opobiyi in Ajikobi Ward of Ilorin West LGA, where he alleged that not a single registration official has been sighted at the designated point since the commencement of the exercise, not to talk of registration materials.

“This is the situation in all other places considered to be the stronghold of high-ranking party members.
“Also in Ifelodun, my local government, registration officials only showed up once and disappeared, making it impossible for many members to register,” he added.

Falana: Judgement on VAT Will Strengthen Campaign for Restructuring