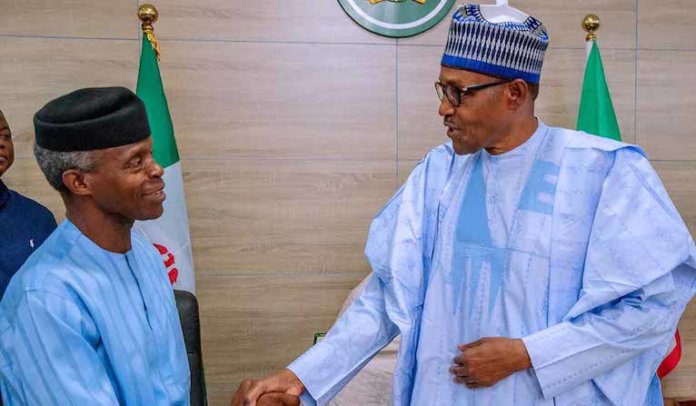 President Muhammadu Buhari has felicitated with Vice President Yemi Osinbajo (SAN) as he marks his 64th birthday anniversary today, describing him as a reliable and dedicated deputy who is not only admirably competent, but also exudes confidence and passion in the performance of his job.

In a congratulatory message, yesterday evening by his media assistant, Malam Garba Shehu, the president said: “I’m proud to have selected Osinbajo as my running mate and he has given a good account of himself since our journey began in 2015.”
According to the president, “The vice president is a cool-headed gentleman who puts the interest of Nigeria above other narrow considerations.”

Buhari noted that Osinbajo is an incredibly patient politician who demonstrates remarkable intellectual and mental energy in the discharge of his duties.
The president wished him many more prosperous years and Almighty God’s continued guidance.
President of the Senate, Dr. Ahmad Lawan; Speaker of House of Representatives, Hon. Femi Gbajabiamila, and the National Leader of the All Progressives Congress (APC), Senator Bola Tinubu, also felicitated with Osinbajo.

Lawan, in a congratulatory message issued by his media adviser, Mr. Ola Awoniyi, said he joined Osinbajo’s family and friends across and outside Nigeria in celebrating the erudite lawyer, intellectual giant, respected religious leader and distinguished administrator on this auspicious occasion.

According to him, the vice president has made his marks in his many fields of endeavour and particularly in the administration of the great nation.
“I pray that God Almighty will continue to imbue him with wisdom and good health as he ably supports President Muhammadu Buhari in their patriotic mission to transform Nigeria and unite its people in happiness and prosperity,” he said.

Gbajabiamila in a statement issued yesterday described Osinbajo as a patriot and democrat, whose services to his fatherland have been commendable, particularly since he became the vice president in 2015.
The speaker said as a lawyer, Osinbajo has distinguished himself and rose to become not only a professor of law but also a Senior Advocate of Nigeria (SAN), which is the pinnacle of law practice in the country.

He said: ”His Excellency, the Vice President, Prof. Yemi Osinbajo, is one Nigerian that should be celebrated at every point in time but the occasion of his 64th birthday calls for more celebration.”
Tinubu, in a statement issued by the Head of his Media Office, Mr. Tunde Rahman, also joined the family, friends, and associates of Osinbajo to celebrate with him as he turns 64.

While praying for many more productive years and the best of health for Osinbajo, Tinubu thanked God for the life of the vice president.
According to the former Lagos State governor, the vice president “has exemplified the best traits of a public servant who strives to do his best for our precious nation.”
He disclosed that Osinbajo had shown great character, intellect, and professional knowledge in serving Nigeria and in supporting Buhari and his agenda.

Tinubu also urged him to continue ever forward by recommitting himself and his ample talents to the betterment of this nation and its people.
“May he always work for the good of the nation and do his best to continue to reform the economy as is his mandate as VP so that all Nigerians may drink of the cup of prosperity and hope.
“I pray that your efforts bear the fullest fruit and that history will speak fondly of your efforts and achievements,” he said.