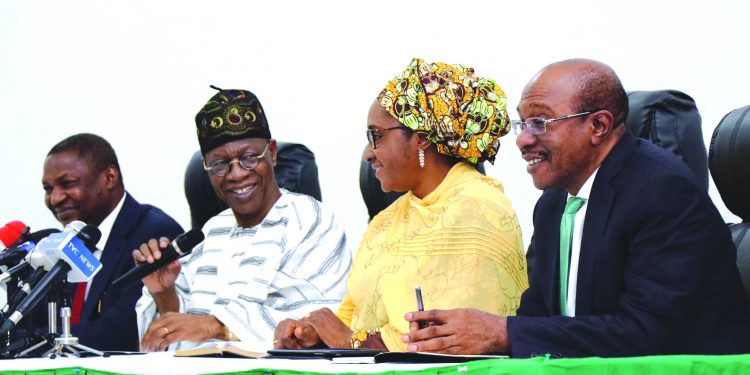 LOCAL and foreign collaborators are behind the controversial $9.6 billion (N3.5 trillion) judgment debt against Nigeria, the Federal Government said on Tuesday.

A British Court on August 16, awarded the judgment authorizing a firm, Process and Industrial Developments Ltd. (P&ID) to seize Nigerian assets anywhere in the world to the value of $9.6 billion for contract default.

The firm entered into an oil  deal with the Ministry of Petroleum Resources in 2010, during the administration of the late President Umar Musa Yar’Adua.

The government described the contract as a product of “criminal and fraudulent conspiracies, right from inception”.

President Muhammadu Buhari has ordered the Economic and Financial Crimes Commission (EFCC), the National Intelligence Agency (NIA) and the Police to probe the criminal conspiracy behind the failed contract.

The government said the contractor, P&ID, did not execute the job it claimed and the contract signed “in an underhand manner”.

The Federal Government has invoked  all its powers to resist the enforcement of the judgment including obtaining a stay of execution.

It insisted that the $9.6 billion damages, which is one fifth of the country’s foreign reserve, if implemented, is capable of impoverishing the country and “inflicting grave economic injury on Nigeria and its people”.

The finance minister described the damages awarded against Nigeria as “excessive and exorbitant”.

According to Hajia Ahmed, an award of $9.6 billion is equivalent to N3.5 trillion which is our annual budget.

She added: “This award is unreasonable, excessive and exorbitant. It is also unfair and it is an assault on each and every Nigerian. It is beyond trying to compensate for a commercial interest.

“For us in the Ministry of Finance, Budget and National Planning, we take comfort from the efforts that so far had been put in place by the Attorney-General of the Federation and Minister of Justice to ensure that this judgment is set aside because the consequences will be unpleasant for each and every Nigerian.

“And I hope our brothers and sisters in the press will help fight the cause of our country. We will be doing that not just for this administration but for our children and children. So it is time for us all to be up in arms to make sure that we are not unfairly treated as a people.”

Mohammed said: “We want to place on record that the Federal Government views with serious concerns the underhanded manner in which the contract was negotiated and signed.

“Indications are that the whole process was carried out by some vested interests in the past administration, which apparently colluded with their local and international conspirators to inflict grave economic injury on Nigeria and its people.

“With the contract having suffered a setback, the case went to arbitration. P&ID’s claim in the arbitration proceedings was mainly for the loss of profit for the 20-year term of the GSPA. In an interim award, the Arbitration Tribunal ruled that Nigeria has breached the contract. Though Nigeria successfully applied to have that award set aside by the Federal High Court in Lagos, the Tribunal ignored this decision.

The Minister said the Federal Government had made attempts since 2017 to resolve the issue amicably with P&ID.

He also said the government engaged the services of the US law firm of Curtis, Mallet-Prevost, Colt & Mosle LLP to defend similar proceedings in the US District Court of Columbia.

“After the arbitration award in 2017, Nigeria made several attempts to negotiate the award and resolve the whole issue amicably with P&ID but to no avail, which eventually led to the enforcement proceedings instituted, simultaneously, by the company in the UK and the US.

“The Federal Government then engaged the services of the US law firm of Curtis, Mallet-Prevost, Colt & Mosle LLP, which took steps to defend the proceedings in the US District Court of Columbia to dismiss P&ID’s application for the enforcement of the award on the grounds that Nigeria, as a sovereign state, has an absolute right to obtain an authoritative determination of its sovereign immunity.

“While Nigeria has recorded some successes in the ongoing case in the U.S., the Federal Government will ensure that its interest and that of the people of Nigeria are vigorously defended.”

Mohammed said it decided to challenge the award after receiving an expert report which rated the damages as “excessive and exorbitant.”

He added: “It is worth mentioning that in challenging the award, the Federal Government relied upon an expert report analyzing the damages given to the P&ID. The expert concluded that the damages:

“It was on this ground and others that the Federal Government took all available steps to resist enforcement before the court of the United Kingdom (UK). Unfortunately, the UK Court has recognized the award and given the company the authorization to seize Nigeria’s assets.

The information minister said the government had discovered that the contract was negotiated and signed in an underhanded manner.

“In the first instance, the enforcement of the award cannot even commence now because the Judge in the UK court ordered that the P&ID cannot enforce the judgment against Nigeria until after the court resumes from its current vacation.

“What this means is that enforcement action cannot begin until further hearing on the matter, which will take place on a date to be determined by the court upon its resumption.

“The Federal Government therefore wishes to use this opportunity to assure Nigerians that there is no immediate threat to Nigeria’s assets as has been wrongly interpreted by a section of the media.”

The Minister confirmed that the Federal Government will file an appeal against the judgment of the UK court, including seeking a stay of execution.

He said: “Nigerians should be assured that the Federal Government is taking  all necessary steps to appeal the decision of the UK Court, to seek for a Stay of Execution of the decision, to defend its rights and to protect the assets of the people of the Federal Republic of Nigeria.

“Nigerians should please be assured that the Federal Government will strongly avail itself of all defences customarily afforded to sovereign states under the United Kingdom Sovereign Immunity Act to stave off any enforcement of the award.

Malami said: “The Criminal investigation relating thereto, has indeed become necessary in view of the certain antecedent relating to the contract in its own right and the eventual award.

“Insinuations abound that the contract was originally designed to fail fundamentally against the background of the fact that there were inherent element of hitches that were designed into it right from conception.

“When I talk of inherent element of hitches, I want to draw attention first to the fact that by the composition of the parties to the agreement there were two parties – the P&ID which is the company and the Federal Ministry of Petroleum Resources.

“So when you conceived, signed and executed a contract for the supply of gas products without involving IOCs, NPDC, and NNPC as a party to that agreement, you know very well that there are a lot of questions to answer arising from the execution of that agreement.

“These among others gave rise to the insinuations or perhaps certain criminal and fraudulent conspiracies right from conception of the agreement.