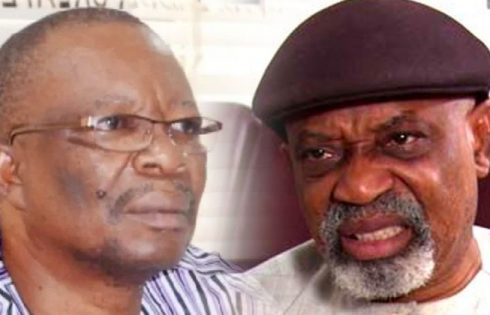 Members of the Academic Staff Union of Universities who are Senior Advocates of Nigeria and Professors of Law among others will be defending the union as the case instituted by the Federal Government at the National Industrial Court comes up for hearing on Monday (today).

The Federal Government had dragged the union before the NIC over its ongoing strike which started on February 14, 2022.

After efforts to end the strike failed, the government decided to drag the union before the industrial court.

On Sunday, a member of the union’s National Executive Council, who did not want his name in print because he was not assigned to speak with the press, said the union would make use of its members who are senior lawyers.

“The president is meant to address this but we will be in court on Monday (today); we have members who are Senior Advocates and Professors of Law, they will be defending the union pro-bono,” the source said.

Also speaking with our correspondent, the union’s National Vice-President, Dr Chris Piwuna, confirmed that members would be in court for the hearing.

“We will be in court tomorrow (Monday) morning. Earlier, we met with the Minister of Education but we are ready for anything. That is the nature of the struggle,” he said.

In a separate interview, the chairman, ASUU of the Federal University of Minna, Dr Gbolahan Bolarin, said, “We are in receipt of the letter and we will be in court tomorrow (Monday). We are, however, shocked at the decision of the Minister of Labour, Chris Ngige.”

Meanwhile, the Minister of Labour and Employment, Chris Ngige, asked the court to give the case an accelerated hearing to quickly bring the strike to an end.

The minister, in a court document, marked HMO/LAB/ISO/15, said, “In view of the fact that ASUU members have been on strike since February 14, 2022, and have refused to call off the action despite the apprehension of same, it would be appreciated if this dispute is given an accelerated hearing to bring the dispute to an end.”

The Socio-Economic Rights and Accountability Project and five university students have filed a lawsuit against the President, Major General Muhammadu Buhari (retd.), asking the court to “declare unlawful the refusal by the Federal Government to meet ASUU’s demands, which has occasioned the prolonged strike and violated the students’ right to quality education.”

SERAP’s Deputy Director, Kolawole Oluwadare, disclosed this in a statement on Sunday.

According to the statement, Ngige and the Attorney-General of the Federation, Abubakar Malami (SAN), are joined in the suit as defendants.

The suit was filed on behalf of SERAP and the students by their lawyer, Tayo Oyetibo (SAN).

The students who are co-claimants in the suit are Dongo Davou; Oyebode Babafemi; Ejie Kemkanma; Peter Aniefiok; and Imam Naziru.

In the suit marked NICN/ABJ/269/2022 filed last week at the National Industrial Court, Abuja, SERAP and the students are seeking: “an order directing President Buhari and Mr Ngige to immediately implement all the agreements with ASUU to end the strike action and violation of the students’ right to quality education.”

According to SERAP and the students, “Disruption of classes undermines both the quality and duration of students’ education. This situation has aggravated existing disparities in access to university education in the country, further marginalising economically disadvantaged parents and students.”

2023: How Will PIA Shape Elections in Niger Delta?