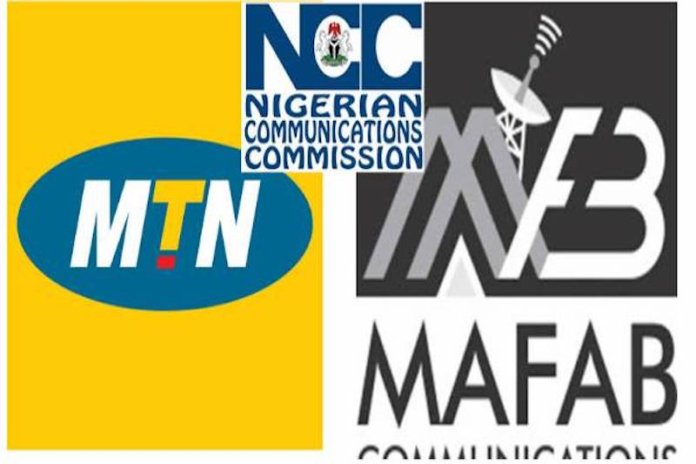 The federal government yesterday earned a total of $547.2 million as MTN Nigeria and Mafab Communications Ltd emerged winners of the keenly contested 3.5 GHz spectrum auction for 5G deployment in the country by paying $273.6 million each.

Three eligible bidders participated in the mock auction exercise which held last Friday, before the main auction that took place yesterday at Abuja.

The three eligible bidders that participated at the mock and main auctions, were MTN Nigeria, Mafab Communications and Airtel Networks Limited.

The bidding which was keenly contested commenced at 11 am and closed at exactly 7.22pm.

All three bidders reached the 11th round of the bidding process, before Airtel Networks withdrew after the eleventh round at $270 million.

According to Danbatta, the two winners entered into another stage of auction called the Assignment Stage to determine which operator takes a particular lot of the two lots that were auctioned.

Danbatta said the winners would pay fully for the licence by February 24, 2022, and must be paid in naira.

Each of the bidders had initially paid N7. 5 billion to qualify for the bidding, which was a 10 per cent non-refundable deposit of the N750 bilion ($197.4 million).

The three bidders were in contest for two slots of 100MHz each in the 3.5GHz spectrum licence, and each bidder contested for one lot.

Before the process commenced, the Auction Manager, who is the Director of Spectrum Administration at NCC, Oluwatoyin Asaju, assigned each of the three bidders their bidding rooms and accredited one representative from each of the bidding operators as monitoring agent.

For transparency, the bidding process was transmitted real time to two broad screens located at a general location inside Transcorp Hotel, where observers, including journalists, were seated.

According to Asaju, the first round of bidding was mandatory for all the three bidders and each bidder was at liberty to exit bidding at any of the bidding rounds.

Although NCC had placed the reserve bidding price for the 3.5 GHz Spectrum at $197.4 million, the Auction Manager however commenced round one bidding process at a reserve price of $199,374,000 million and all three contenders agreed with the new reserve price.

Round six of the auction began with $224, 414,217.43 bid price per lot, and all the three eligible bidders were still in competition.

The Minister of Communications and Digital Economy, Dr. Isa Ibrahim Pantami, who declared the auction open, said the Federal Executive Council (FEC) had on September 8, 2021, approved a National 5G policy for Nigerian Digital Economy. He said the national policy contained all the necessary information guiding the processes and procedures for the development of 5G in Nigeria.

According to Pantami, “The National Policy noted the key role of the National Frequency Management Council in the allocation of spectrum for the deployment of 5G networks in Nigeria. The NFMC is also to ensure that the required spectrum for 5G standard is made available in the most appropriate and timely manner to enable investments, innovation, and competition in the deployment of 5G services for the benefit of consumers and businesses.”

Danbatta, in his opening speech, said the NCC would continue to deepen broadband penetration, protect the consumers and the smart deployment of infrastructure across the country.

“We are committed to strategically play our unique role in driving the digital economy to support the government’s economic diversification agenda. Consequently, we ensured the implementation of policies tor effective communications resource management, strategic collaboration and partnership, facilitating broadband penetration and improvement of Quality of Service (QoS)/Quality of Experience,” Danbatta said.

According to Danbatta,” The 3.5GHz spectrum auction represents a culmination of all the efforts at the international and national levels that have prepared Nigeria tor this momentous leap toward. Therefore, in line with the 5G Deployment Policy and global best practices, the Commission has set in motion the process for the auction and will be offering two lots in the 3.5GHz band with three companies competing to acquire a licence for the available lots.

“The auction is based on the powers bestowed on the commission by Section 121 of the Nigerian Communications Act 2003 as well as the Licensing Regulations 2019.”