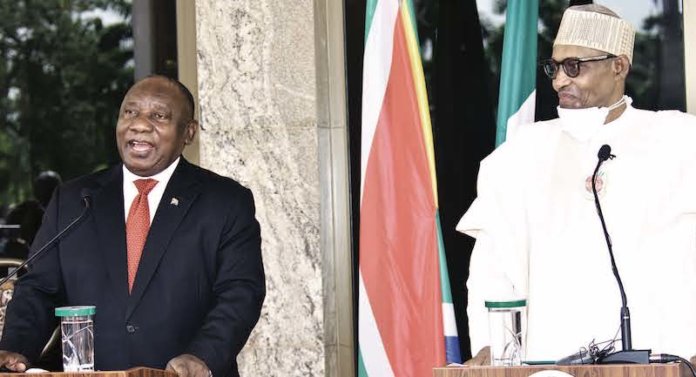 President Muhammadu Buhari yesterday stressed the need for Nigeria and South Africa to strengthen bilateral ties and avoid unnecessary rivalry. Buhari made the call in Abuja at the opening of the 10th session of the Nigeria-South Africa Bi-National Commission (BNC).

South African President Cyril Ramaphosa, again, flayed the recent travel ban on his country by some European countries, describing it as unfair, unscientific, and discriminatory.

During the session at State House, Abuja, Buhari underlined Nigeria’s commitment to a “special relationship” with South Africa. He said such relationship would bring gains to the continent, particularly in education, science, trade and investment, tourism, and security.

Declaring open the 10th session of the BNC in his office, Buhari said, “Permit me to state that some of the challenges identified during the last BNC have not been completely addressed. We need to ensure that our people-to-people relations are enhanced to a point where there would be no need for unhealthy competition.

“In this regard, we need improvement in educational and scientific cooperation, mines and energy resources, transport and aviation, tourism, youth exchange programmes, trade and investment, and military cooperation, to mention but a few.”

The president told ministers and top government officials of both countries that a strong bond of brotherhood between Nigeria and South Africa would be of great benefit to Africa. It would serve as a catalyst for economic, technological, social and cultural development and as a force for peace and security on the continent, he stated.

“Let me at this point reiterate my commitment to ensure that the special relationship between our two countries is continually strengthened,” he added.

Buhari said it was fulfilling that despite the challenges posed by the COVID-19 pandemic, the BNC still held as scheduled.

According to him, “It is also gratifying to observe that this has been brought about by the dogged commitment of senior officials from our countries.

“More importantly, it is gratifying to note that despite the pandemic, our timelines for implementing some decisions of the 9th BNC have been met. Similarly, discussions are on-going on new and important areas of cooperation between our two countries.”

At the end of the summit, Buhari expressed delight at its successful conclusion, calling it “heart-warming and a source of great pride that we have been able to further cement the special bond of fraternal friendship between our two countries.”

He also stated that the agreement on Early Warning Mechanism would “improve the people-to-people relations of our two countries. Similarly, our two countries have established high level official communication channels for diplomatic consultations, trade and investment, and will, shortly, inaugurate the Nigeria – South Africa Youth Dialogue. I am confident that these vehicles of engagement and cooperation will serve our mutual interests.”

Speaking to the youth virtually, Buhari said he was optimistic that the initiative would promote peace building and development as well as help both countries to jointly combat youth restiveness.

The Nigerian leader noted that the dialogue would enable both countries to strategically develop “a vast world of collaboration in areas of science and technology,” including climate change, energy demands, green technology, artificial intelligence, cyber security, telematics, agriculture, technology and much more.

He stated, ”Nigeria and South Africa have a combined population of about 262 million, of which 95 million are youth. This represents tremendous potential for both countries if we can truly harness this demographic with more dedicated action.

“This sizable youth population may also represent significant problems if we fail to maximise their potential in a world that globalisation and technology are reshaping at breakneck speed.

“It is true that our youth already collaborate, especially in the creative arts, sharing our rich cultures. We will build upon this, especially in the framework of the intra- African trade expansion we intend to promote through the African Continental Free Trade Agreement.”

The Nigerian leader said strategic and committed collaborations in science and technology and many other areas would provide both countries with solutions and critical intellectual property to unleash economic outcomes for the creation of millions of jobs.

Speaking at a joint press conference after the bilateral talks, Buhari described Ramaphosa’s visit as successful, despite the scare generated by the new Omicron COVID-19 variant.

He said, “Despite the scare generated by the new COVID-19 variant, we have been able to hold successful meetings, while observing strict COVID-19 protocols, through fraternal cooperation and understanding.

“I sincerely wish to thank my brother and colleague, President Cyril Ramaphosa, for honouring my invitation. I equally wish to thank members of the South African delegation and the experts that worked tirelessly during the Senior Officials Meeting.

“Today, has witnessed the signing of new Memoranda of Understanding between Nigeria and South Africa in diverse areas, including Youth Development, Women and Child Empowerment and Political Consultations; critical areas that will lead to increased people to people contact.

“Also, existing MOUs signed during previous Bi-National Commission meetings were also reviewed. These include MOUs on military cooperation, power, cooperation in the fields of geology, mining, and mineral processing, oil and gas and several others.

“Today, we also jointly launched the Nigeria-South Africa Youth Dialogue, another veritable tool for interaction among our youth with the aim of creating shared values and aspiration. Many of our youth from Nigeria and South Africa joined us virtually during the launch.”

Ramaphosa described the travel ban imposed on his country and some of its neighbours by some Western countries as discriminatory, arbitrary, and unscientific.

The United States, United Kingdom, the European Union (EU), and Canada imposed travel bans on South Africa and some Southern African countries following the recent detection of the Omicron variant of COVID-19 by South African scientists.

Omicron has been classed as a “variance of concern”, as early evidence suggests that it has a higher re-infection risk.

But Ramaphosa said at the press conference that the decision to impose a ban on travels to and from his country and others would be counterproductive in the long run. He commended Nigeria and other African countries that had decided to express solidarity with South Africa and its neighbours by not shutting their doors against sister African nations over the new COVID-19 strain.

Ramaphosa said, “I think it is important that I emphasise this in the light of the discovery by South African scientists of the Omicron variant of the Coronavirus and subsequent imposition of extremely harsh and unfair travel restrictions on flights from and to South Africa as well as on a number of other African countries.

“President Buhari, the solidarity expressed by yourself and the government of Nigeria sends the strongest message. It says that as African countries, we are standing united against the imposition of arbitrary and discriminatory restrictions that are not only unscientific, but counterproductive in the long run.

“Indeed, the leaders of Cote d’Ivoire, where we are traveling to later today, as well as the leaders of Ghana and Senegal, have also expressed their dissatisfaction with the travel ban against South Africa and our sister countries in Southern Africa.

“This is a global pandemic. And overcoming it requires that we collaborate and work together as a collective. The resulting damage to this travel ban to the economies of the countries affected will be considerable and long lasting.

“So, I want to use this opportunity to once again call on the countries who have imposed this ban to reverse their decisions, whether they are in the northern, more developed economies or in other parts of our continent and elsewhere.”

Speaking on the agreements and memoranda signed between his country and Nigeria, Ramaphosa said, “We’ve just concluded a successful 10th session of the Nigeria-South Africa Bi-national Commission. President Buhari and I witnessed the signing of a number of agreements and memoranda of understanding to advance trade and investment, development, economic upliftment, as well as youth empowerment, among others.

“These new agreements between our two countries broaden the scope of our cooperation on issues of common interest and mutual benefits and we will continue to work together to ensure their implementation. At present, our countries have signed approximately 32 agreements and today we have added other agreements.

“South Africa, Nigeria both have rich cultural, vibrant arts and flourishing sports sectors, all of which will be greatly enriched through greater collaboration through the programme of cooperation between the two countries.

“The agreement on audio visual cooperation will be a boost to the film production industries in our respective countries and we, as South Africa, stands to benefit greatly from cooperation with the world-famous Nollywood that has really emerged very strongly here in Nigeria.”

US Visa Ban on Nigerians Not Permanent, Says Ambassador