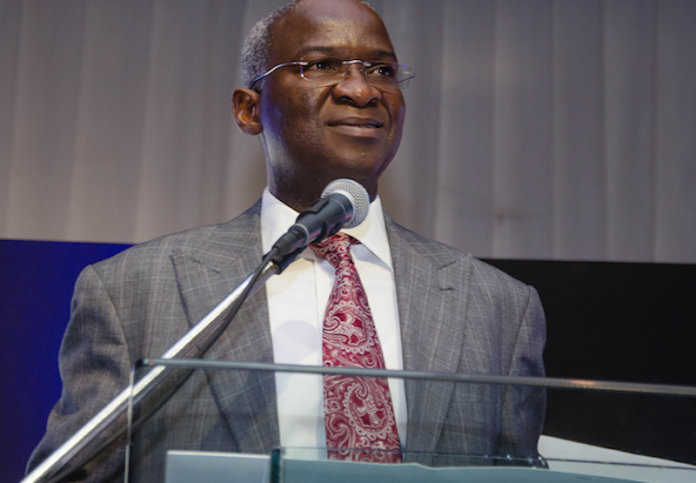 The Minister of Works and Housing, Mr. Babatunde Fashola (SAN), yesterday called on Nigerians to support the country’s armed forces and preserve the memory of those who died defending the nation.

He urged Nigerians to join hands with government to promote peace and security in the country, saying that doing so would mean that the sacrifices made by the fallen heroes were not in vain.

Fashola, who spoke at the headquarters of the ministry where he was decorated with the 2022 Armed Forces Remembrance Day Emblem, explained that the promotion of peace did not necessarily mean the absence of conflicts and disagreement, but the resolution of those conflicts before they degenerate.

“As human beings with our diversity, we could have so many conflicts and disagreement, but those conflicts must not lead to violence or lead to clashes. Those conflicts must be resolved before the day is over and this is the job that is everybody’s responsibility, not only those in government but to all Nigerians”, he said.

He pointed out that if all Nigerians chose to live together the issue of conflict resolution would be an easy task.

“And the less conflict we have, the less people who will have to lay down their lives to bring such conflicts to an end and the less widows and widowers and orphaned children we will have; and the more that happens daily, the better our country will be,” he added.

Urging all Nigerians, both at home and in the diaspora, to support the cause of the Armed Forces Remembrance Day, the minister commended President Muhammadu Buhari for leading from the front at all times and making the upkeep of those left behind by the nation’s fallen heroes a priority.

“Nothing can be too much to support the cause that keeps the veterans and their dependants going,” the minister explained.

Welcoming the delegation of the Nigerian Legion led by its Chairman, Maj. Gen. Abdulmalik Jibril (rtd.), Fashola acknowledged that the occasion was not just about the military but also about the affairs of both those who laid down their lives and those who bear the burden of the sacrifice.

“In this case, it is the widows, who in spite of her grief, continues to support and propagate the values of service in the military,” he stressed.

The minister, who described the “Season of Remembrance” as very important, declared that it is a very important season to remind everyone that were it not for the service of some people and their sacrifice in an ultimate way, Nigeria’s story would have been different.

He noted: “The least we can do to keep the memories of those people alive. To make sure that their sacrifices are not in vain is to continue to work hard to uphold the purpose for which they laid down their lives”.

Earlier, in his opening remarks, Jibril said the purpose of the visit was to solicit assistance from well-meaning Nigerians for the country’s veterans of the various conflicts across the world and in Nigeria as well as their dependants.

Jibil, who said that Buhari launched the emblem on October 21, 2021, added that the president directed that the legion should go round to well-meaning Nigerians across the country to support the course by launching it.

Accompanying the chairman of the legion on the occasion were the general secretary and other top members of the Legion while on the ministry’s side were the Permanent Secretary, Mr. Babangida Hussaini, directors, special advisers and other top ministry officials.

Lawan: Govs Should Have Dialogued, Not Combative over Direct Primaries