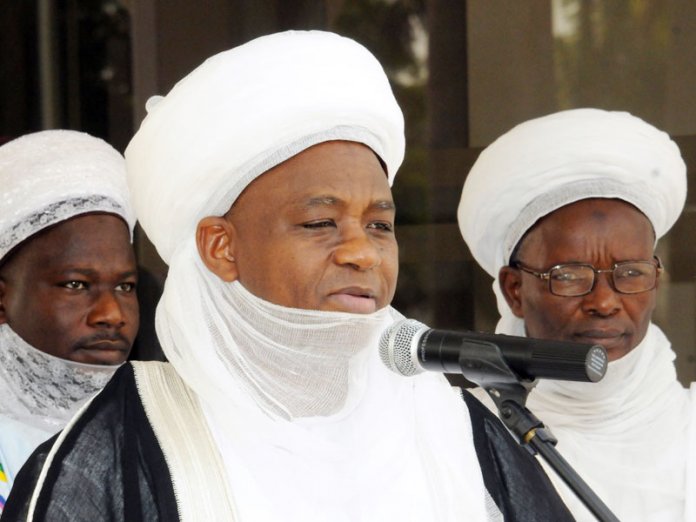 The Sultan of Sokoto, Alhaji Sa’ad Abubakar III, has called on President Muhammadu Buhari and state governors to address the security challenges bedevilling the country.

The Sultan spoke yesterday as the president pleaded for more elite understanding on raging strife in the country, explaining that time is needed for equipment procured, to fight agents of violence to submission, to be delivered.

Abubakar in his Sallah message in Sokoto yesterday said the security challenges had continued to remain a great concern to all.

“We are calling on President Muhammadu Buhari and all the state governors to, as a matter of urgency, bring to an end the insecurity across the country,” he said, adding: “As our leaders, you should continue to remain resolute and more committed to your various responsibilities of protecting the society.”

He called on Muslims to pray more for their leaders to cope with their responsibilities.
He urged Muslims to continue to sustain the spirit of charity, generosity, hospitality and brotherhood that Eid-el-Fitr symbolises.

“Today is a great day for all of us to celebrate, show love, support and relate with one another, as such we should sustain the commitment for our best desire,” he said.
The Sultan urged the residents of Sokoto State to strictly adhere to the COVID-19 protocols and guidelines throughout the Sallah celebration.

Buhari, however, called for more understanding by Nigerians, especially the elite, as his administration battles to end the siege on the nation by non-state actors behind banditry, insurgency and kidnapping.

He stated that the elite should understand the military operation as it takes time for equipment procured to tackle insecurity to arrive in the country.

He expressed the readiness of his administration to resist the threat by bandits to disrupt national food production in the coming growing season.

Speaking to newsmen yesterday after observing the Eid prayer to end the Ramadan fast at the State House, Abuja, the president pledged that his administration will use all available resources and manpower in dealing with bandits to ensure that they did not create havoc against access to farms and food production.
He assured Nigerians that the menace of bandits and kidnappers will be addressed to ensure that the nation’s food security is not threatened.

Commenting on ongoing efforts by his administration to tackle the security crisis, Buhari drew attention to the series of long meetings held in recent weeks, chaired by him, saying part of the resolutions reached at the meetings had been made public by the National Security Adviser, Maj. Gen. Babagana Monguno (rtd), and the others kept secret.

He said: “With the resources and manpower available to us, we are working very hard. We are hoping Nigerians will understand the problem. Nigerians know at what stage we came in in 2015, what state we are today both on security and the economy and we are doing our best.”

He commended the National Assembly for its support, saying: “The National Assembly is cooperating very well. Within the resources available, they are certainly giving us priority on our (military) requests.”
Buhari appealed to the elite to show a better appreciation of the problems facing the country.

“The elite should make the attempt to understand the military. If we order weapons and armoured vehicles, it takes time for the manufacturers (to produce them). It takes time to ship them and when brought here eventually, they are taken to training institutions, train the trainers before sending them to the field. This is a very long process,” the president stated.

For example, when we came in, in the North-east, ask people in Adamawa and Borno States, and the South-south, in terms of security. Without security, you can’t do anything. Our big surprise and disappointment are what is happening in the North-west and we are dealing with it.”

Buhari and members of his family were joined for the Eid at the forecourt of the Presidential Villa by the President of the Senate, Dr. Ahmed Lawan; the Speaker, House of Representatives, Hon. Femi Gbajabiamila, cabinet members and the heads of security and intelligence agencies.

Buhari, Aisha Step out Together First Time in Months

For the first time in months, Buhari yesterday stepped out with his wife, Aisha, to celebrate this year’s Eid-el-Fitr.
Buhari shared many photos on social media where he and his wife were surrounded by their children and their spouses.
In some of the photos, Buhari was also seen with his grandchildren.
In a string of tweets, the president congratulated all Muslims on the occasion of this year’s Eid festival and prayed that it will bring with it peace, safety, security, brotherhood and love amongst others.

He sought “unity and solidarity among all citizens, Muslims and Christians,” adding that these virtues are imperative “especially at a time when our country is faced with multiple challenges which are surmountable only when we come together as one.”

Ecobank Nigeria has gone into partnership with a media entrepreneur an…
June 23, 2021

The African Development Bank Group (AfDB) has announced the appointmen…