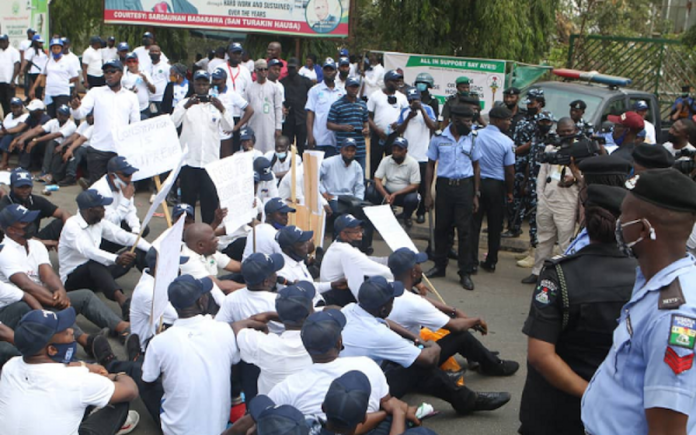 Governors and speakers of Houses of Assembly in the 36 states of the federation have disagreed over the modality for the disbursement of funds to the legislature under the financial autonomy regime billed to begin in May.

THISDAY gathered at the weekend that while the governors are offering an irreducible minimum payment of N100 million monthly to each of the legislatures in the states to fund their operations, the speakers are insisting on N250 million monthly.

The governors also rejected the demand of the Judiciary Staff Union of Nigeria (JUSUN) and the Parliamentary Staff Association of Nigeria (PASAN) that the gross allocations should be remitted to the two arms of government directly.

The governors’ hard-line position, it was learnt, might delay an early resolution of the strike embarked upon by judicial and parliamentary workers in the 36 states and the Federal Capital Territory (FCT) to press for the implementation of financial autonomy for state judiciaries and legislatures.

While the governors have agreed that the National Judicial Council (NJC) will handle funds for states’ judicial councils, they insisted that they will deduct loans and legacy debts from their allocations.
In a bid to resolve the issues and end the ongoing industrial dispute, the federal government will today hold talks with the striking judicial workers and PASAN.
However, PASAN has said its members will continue the strike until full financial autonomy of the state legislatures is implemented.

The agitation by JUSUN and PASAN for the implementation of financial autonomy for the judiciary and legislative arms of government in states, as stipulated by the 1999 Constitution as altered, had led to the shutdown of courts nationwide for the third week running.

At a meeting between the Chief of Staff to the President, Prof. Ibrahim Gambari, and the governors under the auspices of the Nigeria Governors’ Forum (NGF), both parties had reached an agreement on how to resolve the issues, with the governors proposing May timeline for the takeoff of the implementation of financial autonomy for the two other arms of government.

But after a meeting with President Muhammadu Buhari on Friday, the Minister of Labour and Employment, Senator Chris Ngige, confirmed THISDAY’s report to State House correspondents that the governors had altered some parts of the agreement.

He said the development was responsible for the insistence of the judicial workers not to suspend their industrial action.
He said the affected areas of the agreement were fundamental in terms of the execution of Sections 83 and 162 of the Executive Order 10.

Ngige said: “We reviewed what has been done. The chief of staff did what we call in labour parlance tripartite plus arrangement by engaging them, both parties conceded; the Nigeria Governors’ Forum, the heads of courts, state judges, the unions and the Presidential Implementation Committee for Executive Order 10 led by the Attorney-General, represented by the Solicitor-General of the Federation and Permanent Secretary.

“So, we reviewed where they are. We had a twist two days ago because the arrangement they had with the chief of staff had to be altered when the governors got back to their forum.

“As the conciliator, when they presented the two papers, one from the solicitor-general and another one from the director-general of the NGF, I had to tell them that we have to reconcile those papers because the areas where they differ are very fundamental areas in terms of the execution of Sections 83 and 162.”

The minister added that the governors should rework the agreement among themselves for negotiations to resume.
However, a source told THISDAY at the weekend that the governors have accepted in principle the funding of both the state legislatures and judiciaries from their allocations from the Federal Accounts Allocation Committee (FAAC), to be deducted from the States Accounts Allocation Committee (SAAC).

The source said as part of its implementation, the state governments would from May 1, set up the States Accounts Allocations Committee (SAAC) with members from the States Assembly Committee Chairmen on Finance and the States Commissioners of Finance to discuss on monthly basis the disbursement of funds.
The source, however, added that the governors and speakers could not reach a consensus on how much to be given to each state legislature monthly.

According to him, while the governors have proposed minimum irreducible monthly allocations of N100 million to the state legislatures, the speakers insisted on N250 million.
Also, the governors, it was learnt, stuck to their initial position that the amount for the legislature and the judiciary should be based on the net proceeds from FAAC after deductions of states’ debts, instead of the gross.
The source stated that the governors’ position was that all monthly debts incurred by the states must be deducted from the allocations.

He said: “Governors have agreed in principle on the financial autonomy for the other arms of government in the states, but it must be based on the net deductions from FAAC
“It’s like at the state level you now have what is called SAAC. You know, at the federal level, they have FAAC. So, there is an equivalent now for FAAC at the state level. So, certain parameters will have to be set. Everybody will be involved.

“So, they now said the irreducible minimum for the legislative arm should be N250 million every month. The governors look at it and said ‘No that will be too much.’ They sat and decided that it should be N100 million. So, the leadership of the legislature said they were not comfortable with that. That’s for the legislature.
“For the judiciary, it will come through NJC. So they don’t have any problem at all with the judiciary.”

In a bid to end the ongoing industrial action by judicial and legislative workers, the federal government will today hold talks with the JUSUN and PASAN.

Deputy President of JUSUN, Mr. Emmanuel Abisoye, told THISDAY at the weekend that the federal government team, at the meeting, billed for Abuja would be expected to present fresh proposals for resolving the dispute over the workers’ demand for the implementation of financial autonomy for the judiciary and legislative arms by the states.

“We have been invited to a meeting on Monday; may be the government will be presenting its position to us at the meeting. So, we are expecting that on Monday,” he said.

However, PASAN has vowed not to end its ongoing strike except its demands are met.
It demanded that a Memorandum of Understanding (MoU) be signed by all the governors and speakers of the 36 states of the federation.

Legislative activities in state assemblies have been paralysed since the workers downed tools on March 23.
In a letter addressed to Ngige, which was sighted by THISDAY, the union listed five conditions for it to call off the strike.

The letter signed by Acting National Secretary of PASAN, Mr. Ikechukwu Alaribe, listed the conditions to include the full implementation of the financial autonomy for the state legislature and state judiciary; and the full compliance with Presidential Executive Order No. 10, 2020 for the implementation of financial autonomy for the state judiciaries and legislatures.

PASAN also demanded that states assemblies’ service commissions must be established in each state of the federation.
The union said the decision to continue with the strike was reached after its enlarged National Executive Council (NEC) meeting.

The union also demanded that all the 36 states must have funds management committee bills, signed into law by the governors while deductions should be made directly from the source to the Houses of Assembly accounts.