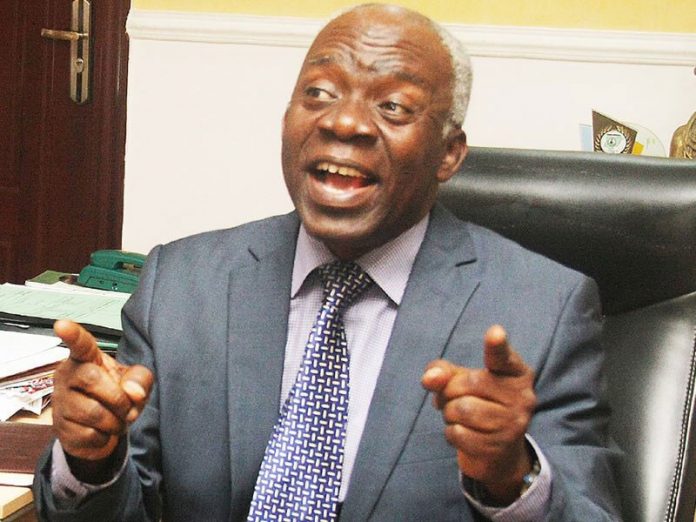 Human rights lawyer and Senior Advocate of Nigeria, Mr. Femi Falana (SAN), yesterday blamed what he called President Muhammadu Buhari’s lopsided appointments for the divisions in Nigeria.
Speaking on The Morning Show, a programme on ARISE NEWS Channels, the broadcast arm of THISDAY Newspapers, Falana said the division among Nigerians was caused by the policies of the federal government.

His position agreed with that of Pan Yoruba socio-cultural organisation, Afenifere, Chief Ayo Adebanjo, who on Wednesday told ARISE NEWS Channel that Buhari’s policies must be apprehended as the root cause of the widespread strife in the country.

Falana also took a swipe at the ruling class, whom he accused of being “backward and shortsighted” for deliberately ensuring that citizens were pauperised and dehumanised in a way that compelled them to sell their votes for N500, a little above one US dollar.
He said the president had since assumption of office used lopsided appointments to divide the citizens.

“At the moment, Nigerians are divided because of the policies of the government. Let me tell you, one that we have just taken up from our movement. The president sent nominees for the membership of the governing council of the Human Rights Commission.
“Our movement studied this and discovered that it was full of lopsidedness, whereas in one region of seven states, out of four people nominated in that region, three came from one state (Kebbi),” he said.

Falana stated that “of the six geo-political zones nobody was nominated from the North-east zone, which records the highest number of human rights violations because of the counter-insurgency operations going on there.”

He said he had written to the Senate requesting it to advise the president to withdraw the appointees of the governing council of the commission and ensure that the proposed appointments comply with the provisions of Section 14 (3) of the Constitution and Section 4 of Federal Character Commission (Establishment etc) Act.

His petition came about three weeks after the president sent the names of the 16 nominees for the Senate’s approval.
The petition was referred to the committee on ethics, privileges and public petitions expected to report back in two weeks.

According to him, “If we just throw up our hands in helplessness and you allow lopsided appointments to go on and be used to divide our people, we have a duty now to arrest such ugly development and that is part of what our movement is doing.

“Once confidence is built, we have also identified human rights lawyers in the 36 states of the federation and Abuja so that when people’s rights are violated, we simply ask our lawyers to go and intervene.

“Our people will begin to have confidence in what we are doing; that this is different from those who are colluding with the neo-colonial state to oppress them.”
The senior lawyer said he was part of a formidable group of stakeholders exploring the possibility of a progressive coalition on the platform of the Peoples Alternative Political Movement (PAPM), which he said would turn around the fortunes of the country and put a stop to cases of vote-buying and selling.

He said the new political movement would arrest the unpleasant drift and put the law to work.
He explained their position: “What has happened in our country is that the ruling class, a very reactionary, backward, shortsighted ruling class has deliberately pauperised our people, dehumanised our people in a way that people are compelled to take N1,000 or even N500 to sell their votes, but we are going to stop that.

“There are laws by the virtue of the Electoral Act; we are going to stop that and ensure that we make the law to work. Anybody, any group of people that bribe voters, we are going to mobilise young people in the country to ensure that we stop that.”
He said the group would appeal to the people to reject money for their votes for the sake of the future of their children.

“We are going to bring out the contradictions in the system to our people and when you mobilise them, Nigerians are the easiest people to govern to the best of my knowledge,” Falana said.