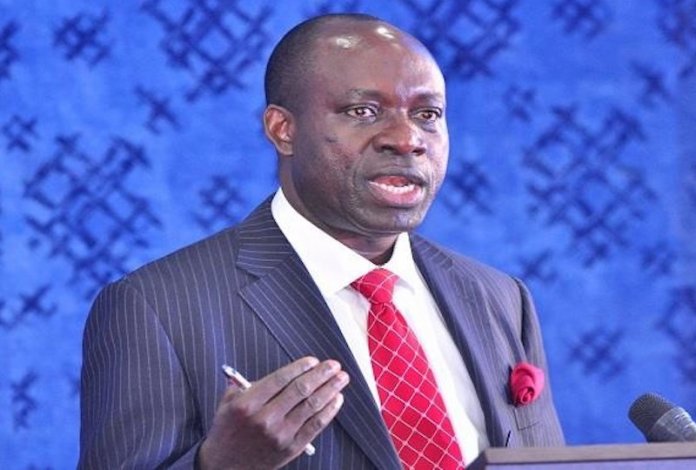 Members of the National Assembly from Anambra State on the platform of All Progressives Grand Alliance (APGA) have resolved to support former Central Bank Governor, Prof. Chukwuma Soludo, to clinch the ticket of the party for the November governorship poll.

This was revealed yesterday during a meeting of the caucus with the state executive committee of the party, when the former Central Bank chief visited the state party secretariat in Awka, the state capital to notify them of his intention to run for the governorship position.

Obidigwe said, “In 2013, Soludo was disqualified by the party as an aspirant of APGA, and he took it in good faith. He was not among the aggrieved aspirants who decided to play a spoiler game for the party.
“We have been begging Soludo to run, and today he has accepted to run. All members of the National Assembly caucus from APGA have resolved that we will support him. Just one or two persons are disagreeing with this, but you know that majority carries the vote.

Soludo has remained consistent in the party. In 2017 when Governor Willie Obiano was running for re-election, it was this same Soludo that insisted that Anambra (under Obiano) was not broken, so there was no reason to mend it.
Willie is working and Soludo will consolidate on his achievements when he comes in,” Obidigwe said.

In supporting him, Nwankwo added that, “Soludo is one man who identified me a long time ago. He loves bright youths, he identified me early enough and supported my aspiration to go to the House of Representatives. I will not only support him by words of mouth, but with my resources and youthfulness.”

Earlier, Prof. Soludo while notifying the party of his intention to run for the governorship seat of Anambra State said the November 2021 governorship election was very important to the survival of the APGA as a party.

He said, “This election is consequential in Anambra State and if APGA does not win, it means the party is gone. No APGA member should toy with this election. If APGA leaves Anambra it has lost direction. Do not make mistake in the person the party fields for the election as candidate because the party cannot afford to lose the election.”

He said the collective destiny of the party was at stake and must be protected by all means.