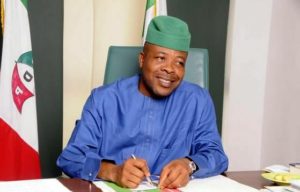 The Supreme Court on Tuesday affirmed Imo State governor, Emeka Ihedioha, as the authentic governorship candidate of the People’s Democratic Party (PDP) in the 2019 general election.

Tye apex Court dismissed a suit filed by Senator Sam Anyanwu, challenging the emergence of the Imo Governor as the PDP candidate.

The appeal, heard by a panel of five Justices of the Supreme Court, presided over by Hon. Justice G. Okoro, held that the allegations of fraud and over voting pleaded by the appellant were not proved.

The Supreme Court which held that the appeal ought not to have come to the Apex Court at all, further held that the concurrent findings by the lower courts were unassailable and also agreed with the Court of Appeal, Owerri Division and affirmed the judgement of the trial Court.

In its judgement, the Court also awarded costs of N200, 000.00 against the appellant (Sam Anyanwu) in favour of Ihedioha and the PDP.

Anyanwu had approached the Court seeking to nullify the victory of Ihedioha on the allegations of over-voting and thuggery, which he alleged, swayed the polls against him and that he be declared as the authentic winner of the primary election.

It could be recalled that Governor Ihedioha polled 1723 to defeat Senator Anyanwu, who scored 1282.in the party’s primary election.

While Senator Anyanwu rejected the result of the primary election, five other aspirants accepted the outcome of the exercise.

Governor Ihedioha in a statement signed by his Chief Press Secretary, Mr. Chibuike Onyeukwu, described the judgement as a “victory for democracy and dedicated it to God and the good people of Imo State.

“The governor, again, extends the olive branch to Senator Anyanwu to join hands with him in his efforts to rebuild the state and restore her lost glory.

“Imo State is our home and we have no other place to go. I extend, once again, my hands of fellowship to my brother Senator Sam Anyanwu to join us as we make genuine and deliberate efforts towards rebuilding our state, which we met in a state of near-collapse”.