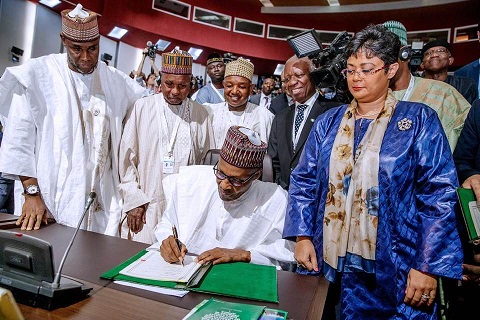 The Republic of Benin also joined the group, bringing to 54, the total of African countries out of 55 that had endorsed the AfCFTA agreement. Only Eritrea is left out.

The Nigerian President appended his signature to the agreement at the 12th Extraordinary Summit of the African Union on the Launch of the Operational Phase of the AfCFTA.

The AfCFTA Agreement entered into force on May 30, 2019, thirty days after having received the twenty-second instrument of ratification on 29th April 2019 in conformity with legal provision”, a State House statement by the Special Adviser to Buhari on Media and Publicity, Mr Femi Adesina, said on Sunday.

But, speaking at the event in Niamey, Buhari noted that much as Nigeria supported free trade among the African countries, the trade must also be fair to all.

He said, “Nigeria wishes to emphasise that free trade must also be fair trade.

‘‘As African leaders, our attention should now focus on implementing the AfCFTA in a way that develops our economies and creates jobs for our young, dynamic and hard-working population.

‘‘I wish to assure you that Nigeria shall sustain its strong leadership role in Africa, in the implementation of the AfCFTA. We shall also continue to engage, constructively with all African countries to build the Africa that we want.”

Buhari spoke in details on Nigeria’s position on the trade agreement, especially on how best to make it successful.

He stated, ‘‘I have just had the honour of signing the agreement establishing the AfCFTA on behalf of my country, the Federal Republic of Nigeria.

‘‘This is coming over a year since the AfCFTA Agreement was opened for signature in Kigali, Rwanda, at the 10th Extraordinary Summit of the African Union, on 21st March 2018.

‘‘In fact, you will recall that the treaty establishing the African Economic Community was signed in Abuja in 1991.

‘‘We fully understand the potential of the AfCFTA to transform trade in Africa and contribute towards solving some of the continent’s challenges, whether security, economic or corruption.

‘‘But it is also clear to us that for AfCFTA to succeed, we need the full support and buy-in of our private sector and civil society stakeholders and the public in general.

‘‘It is against this background that we embarked on an extensive nationwide consultation and sensitisation programme of our domestic stakeholders on the AfCFTA.

‘‘Our consultations and assessments reaffirmed that the AfCFTA can be a platform for African manufacturers of goods and providers of service to construct regional value chains for made in Africa goods and services.

‘‘It was also obvious that we have a lot of work to do to prepare our nation to achieve our vision for intra-African trade which is the free movement of ‘made in Africa goods’ .”

‘‘Some of the critical challenges that we identified will require our collective action as a Union and we will be presenting them for consideration at the appropriate AfCFTA fora.

‘‘Examples are tackling injurious trade practices by third parties and attracting the investment we need to grow local manufacturing and service capacities.’’

Meanwhile, the Executive Director of Nigerian Export Promotion Council, Mr Segun Awolowo, has disclosed that 22 non-oil sector products have been identified by the Federal Government for export, worth about $30,000bn in earning yearly.

Awolowo, who spoke with State House Correspondents in Abuja, also said Nigeria could create as much as 500,000 new export-related jobs by belonging to the AfCFTA.

He named cocoa, cotton, cement, leather, cashew, Sesame, Shea butter, palm oil, fertiliser, petrochemicals, and rubber among other products to be exported in favour of Nigeria.

Awolowo added that Buhari had already been given a briefing on the products.

He explained, “What we hope to achieve is to raise more revenue for Nigeria from other sources. You know 90 per cent of our revenue is from oil and we cannot survive. Even though oil prices are rising a bit because of Iran, there is a problem there.

“But we should not rest on our oars because; those days of $140 per barrel are gone forever. So, we have to look inwards and produce more.

“The zero oil plan is about raising production and productivity. We identified 22 sectors where we can earn foreign exchange apart from oil. We are hoping that in the next 10-15 years, we will be able to raise $150bn from sources outside oil. That is what we are working on and we are galvanising the whole states behind us in order to raise production and productivity.

“We are working with the relevant ministries, departments and agencies to achieve this. You know the Central Bank of Nigeria just announced an initiative on five of our products and giving them low interest rates to farm and raise production.”

On the potential in cocoa, for example, Awolowo noted, “Cocoa is an immediate win for us because it’s been our number one non-oil revenue making. But we are on less than 300,000 metric tons; Ghana is heading to 900,000, and Cote d’ Ivoire is almost two million metric tons.

“So, how do we compete? Meanwhile, if you see the land mass in Nigeria, you can imagine what we can do. Another sector is Shea nut; cashew is another breadwinner for us, so let us raise production, let’s give our farmers, plantations low interest loan so that they can raise production for us. We are also looking at value addition for all because that is the way you create jobs, we cannot continue to sell the raw materials.”