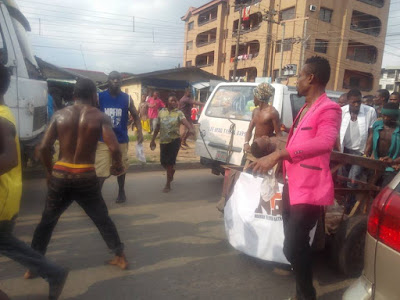 There was tension in the Ibafo area of Ogun State on Wednesday after a porter, identified as Musa Hussein, was stabbed to death by three youths in the area.

PUNCH Metro learnt that the 27-year-old and his friend had gone to dispose rubbish around 11pm on Tuesday.

The two friends were returning when Hussein reportedly stepped on the toes of one of the suspects, who insulted him.

After an exchange of words, the three assailants descended on Hussein and beat him to a pulp.

The victim allegedly tried to defend himself with a fork, but one of the hoodlums reportedly snatched it and stabbed him in the chest with it.

He was rushed to a private hospital where he eventually died.

The incident threw the community into panic as some Yoruba traders and residents fled for fear of reprisal by angry Hausa youths who protested against the killing.

However, some community elders were said to have intervened and appealed to the Hausa community for calm.

The Kara-Ibafo Chief Security Officer, Usman Aliyu, who spoke with PUNCH Metroon Wednesday, said there was the need for government to beef up security in the area to avoid any breakdown of law and order.

He lamented that Hussein was killed over an issue that could have been resolved amicably.

He said, “The boy was a porter. He carried loads for people at the Ibafo bus stop and he had been doing that since he came to Ogun State from the village in Sokoto about five years ago. Last night (Tuesday), he and his friend helped a woman to dispose rubbish in a dump. They were paid N700 for the job.  They were looking for a place to share their money when he (Hussein) mistakenly stepped on one Yoruba boy.

“Hussein said sorry to him, but the Yoruba boy said it was not enough and started abusing him. That was how they started an argument.

“Suddenly, two other Yoruba boys came from nowhere and attacked him. The three of them started beating him. One of them picked a sharp object on the ground and stabbed Hussein in the chest. We took him to a hospital, where he died.”

A resident of the area, who did not identify himself for security reason, said the deceased had attempted defending himself with a fork, which fell to the ground, adding that it was what the suspects used to stab him.

“Since the incident happened, there has been fear and some people ran away because the Hausas appear not to be taking it lying down. But there is calm now after our community leaders mediated,” he added.

He said the three suspects were rounded up by the community and handed over to policemen from the Ibafo division.

It was learnt that the victim’s corpse had been deposited in the Olabisi Onabanjo University Teaching Hospital mortuary, Sagamu, for an autopsy.

The state Police Public Relations Officer, Abimbola Oyeyemi, confirmed the incident, adding that the suspects would soon be transferred to the State Criminal Investigation and Intelligence Department, Eleweran, Abeokuta.

“The Ibafo Divisional Police Officer has spoken to the Hausa leaders that there is no need for any issue since the culprits have been arrested,” he added.

Nigerian Stocks Haven’t Had a Run This Good Since 2001

Riding on the Runway