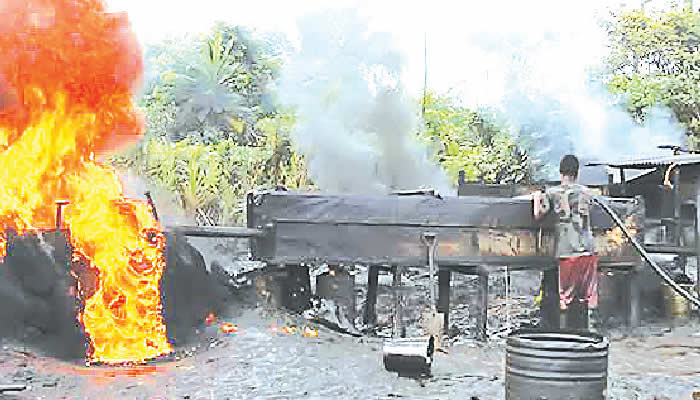 As crude oil theft and illegal refining continue in the Niger Delta region, the Nigerian Navy says it has destroyed no fewer than 347 illegal refineries in the last five months.

It stated that the proliferation of illegal refineries had been an enabler of crude oil theft because access to crude supply through vandalism of pipelines had kept the illegal artisanal refineries alive.

Speaking during a visit to Punch Nigeria Limited, the Director of Information at the Naval Headquarters, Commodore Adedotun Ayo-Vaughan, noted that host communities, traditional rulers and other leaders in the region had a role to play in the reorientation of the perpetrators, especially young people. He said the menace posed serious danger to the environment and was impacting negatively on the country’s revenue.

With about 400,000 barrels of crude oil said to be stolen daily, the rate of oil theft in the country has been described by many persons and organisations as economic sabotage, given the way it erodes the country’s revenue from crude oil export, the mainstay of the country’s economy. Owing to the menace, Nigeria has been unable to meet its quota as allocated by the Organisation of Petroleum Exporting Countries.

On account of the dwindling revenue fuelled by the low oil production, Nigeria has resorted to frequent borrowings, with the country’s debt stock standing at over N41tn, a development that has fuelled concerns by many citizens and organisations.

Ayo-Vaughan explained, “Since Operation Dakatar de Barawo commenced on April 1, 2022, the illegal refining sites that we have destroyed so far are 347, and we have arrested 143 suspects till date. The perpetrators are usually locals recruited by the main perpetrators in the crime and the proliferation of the illegal refining sites is in many ways fuelling the theft because it’s like a symbiotic relationship.

Meanwhile, speaking on reports that about 400,000 barrels of crude oil were being stolen daily, Ayo-Vaughan said it was impossible for such to be stolen through the Nigerian waters every day.

He stated, “Yes, we have the challenge of crude oil theft, but there has been a lot of wrong information in the media, particularly in the electronic media. I think the narrative has changed from 400,000 barrels to 100,000 barrels. Recently, the Managing Director of Agip Oil Company and the MD of Total met separately with the Chief of Naval Staff, Rear Admiral Awwal Zubairu Gambo, at the naval headquarters to interact with him.

“When you want to move out that quantity of crude, there are no pipelines that run beyond the terminals as we speak. So, the only place this theft can take place is at the terminals and within the creeks where people can vandalise the pipelines. The Group Managing Director of the Nigerian National Petroleum Company Limited (Mele Kyari) said they even discovered that some people siphon the oil and store it in churches and mosques. That’s from their local intelligence.

“People siphon this crude and supply the illegal refineries. The first issue; if you are saying Nigeria loses about 100,000 barrels per day, which translates to about 15 million litres; for you to lift that quantity of oil, you need to have perhaps a five-tonne barge that will have to go about 3,000-plus trips a day to the high sea. The movement of 3,000 barges cannot take place like that.”

He said the navy was not the only security agency in the creeks, adding that there were soldiers, personnel of the Nigeria Security and Civil Defence Corps and marine police.

The naval spokesman stated, “Are we saying all these people will allow the movement of 3,000 barges in one day, not to talk of two days, one week or a month? Honestly, it is practically impossible.

“That is my opinion and that is the stand of the navy; that to move 3,000 barges in a day to convey 100,000 barrels is practically impossible.”

When asked where the shortage could be coming from, he said it would be the illegal refiners.

He added, “What it means is that whatever is stolen in the creeks is used to supply the local illegal refineries and the navy has been hard on the operators of those refineries. Some of the things we hear as losses or thefts are actually the inability to transport the crude from the point of exploration through the pipelines.

“There is a pipeline called the Trans-Niger pipeline. One of the heads of international oil companies said for a long time they had to shut down that pipeline because they found that when they open it, what gets to the terminal or what gets to the destination was not what was released, so there is a lot of stealing.

“This brings the aspect of the will and persuasion of the political leaders in the Niger Delta to talk to their people. Apart from the loss, the environmental impact is huge; there are some areas where 10 to 15 acres of land are burnt and vegetation is gone.”

He attributed air pollution in the region largely to the activities of illegal refiners, saying the illegal activity informed why the Governor of Rivers State, Nyesom Wike, led a team to destroy some illegal refineries in some parts of the state; while onshore, the navy was doing everything it could.

Ayo-Vaughan also called on international oil companies to always seal the oil wells that were no longer commercially viable, saying the neglect of such oil wells was attracting illegal refiners.

He added, “There is the aspect of the political leaders and the International Oil Companies. The IOCs are the ones that drill the oil wells. When the oil wells are no longer commercially viable, according to international best practices, you are to seal them, but it’s not that the wells are dry. Those wells have not been sealed and we have identified them in the creeks.

“When they don’t seal the oil wells, they are a source for the illegal artisanal refiners. So, there are many sides to it. The Chief of Naval Staff engages regularly with the NNPCL GMD so that as a regulatory body, they compel the IOCs to do the needful. The navy also has put in place checks to identify any person that compromises or becomes complacent in any way.”

He explained that there were about 3,000 creeks in Delta State and that the locals, using their knowledge of the area more than the security agents, were the ones siphoning the fuel.