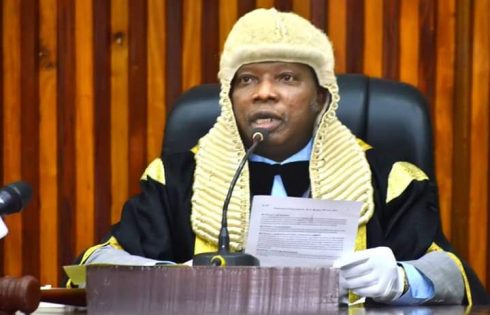 Operatives of the Economic and Financial Crimes Commission, on Thursday, arrested the Speaker of the Ogun State House of Assembly, Olakunle Oluomo, at the Murtala Muhammed International Airport, Lagos.

He was accused of embezzlement, forging signatures and financial documents of the assembly.

The development disrupted the sitting of the assembly.

Oluomo was said to have been on the wanted list of the commission following his failure to honour several invitations extended to him.

EFCC invitation followed the suit instituted by the assembly against the anti-graft agency in January at the Federal High Court, Abeokuta.

The house in suit N0: FHC/AB/CS/7/2022, dated January 14, 2022, is seeking an order of interlocutory injunction restraining the EFCC from inviting or interrogating the speaker in connection with the criminal allegation made against him and some others by an aggrieved member of the assembly.

A worker at the assembly who pleaded anonymity said the speaker was picked up at the Lagos airport by the EFCC operatives following a tip-off.

An EFCC source disclosed that Oluomo was subsequently flown to Abuja for interrogation.

Attempts to get confirmation from the commission failed   as the EFCC National and South-West spokespersons, Mr Wilson Uwujaren and Mr Dele Oyewale, did not take their calls.

They have yet to respond to a text message sent to their phones as of the time of filing this report.

Meanwhile,  a member of the Ogun State House of Assembly confirmed Oluomo’s arrest.

He said, “The information you got is correct. Our speaker was arrested by operatives of the EFCC earlier this morning. From what I gathered, he was alleged to have been involved in misappropriation and embezzlement of funds.”

Oluomo was still in custody of the anti-graft agency as of the time of filing this report on Thursday evening.

It was gathered that the absence of the speaker prevented the assembly from holding its Thursday sitting.

The Ekiti ‘Osuaite’ Who will be Governor