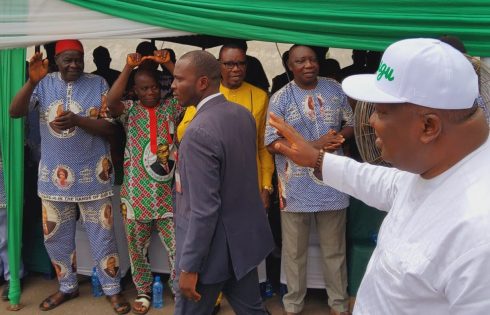 The 260 ward chairmen of the Peoples Democratic Party, PDP, in Enugu State, on Thursday, unanimously declared their maximum support and loyalty to the leader of the party in the state and the South East geo-political zone, Governor Ifeanyi Ugwuanyi, who is also the candidate of the party for Enugu North Senatorial District in the 2023 general election.

The PDP ward chairmen pledged to deliver all the candidates of the party in the state at the polls, reiterating their commitment to the success of the Gov. Ugwuanyi-led PDP state government.

They reassured Gov. Ugwuanyi that they are intact, united, focused, more formidable and committed to the task of delivering him to represent Enugu North Senatorial District, the PDP governorship candidate in the state, Barr. Peter Ndubuisi Mbah, his running mate, Barr. Ifeanyi Ossai, and other candidates of the party.

The PDP ward chairmen, expressed delight at Gov. Ugwuanyi’s performance as well as his outstanding leadership qualities, maintaining that they are resolute in their decision to deliver the party and its candidates in the 2023 elections.

They added that the governor, through his good works, uncommon leadership style, magnanimity, political sagacity and inclusiveness has made the job of delivering the PDP and its candidates easier for them.

The PDP chairmen used the opportunity to appreciate Gov. Ugwuanyi for the choice of Barr. Mbah as the party’s governorship candidate in Enugu State, describing him (Mbah) as “a marketable product.”

Speaking on their behalf, the coordinating chairman of the 260 PDP ward chairmen, Hon. Ozo Ejike Okpe, stated that Gov. Ugwuanyi’s commitment to the progress of the party in the state and the South East zone is exceptional.

Hon. Okpe told the governor that “you came and did for us what has never been done for the ward chairmen in the history of this state,” adding that the present PDP ward chairmen benefited immensely in the World Bank supported Agricultural Productivity Enhancement and Livelihood Improvement Support (APPEALS) project of the state government.

Reiterating their commitment to the PDP, the coordinating chairman assured Gov. Ugwuanyi that they will work tirelessly at the grassroots as foot soldiers to deliver the party overwhelmingly as they did during the governor’s re-election in 2019 and subsequent elections.

“Your Excellency, the promise we are making to you is 100 percent delivery as we used to do in Enugu State. We have been doing it. There was a time we came here, Your Excellency and promised you that we will make sure that nobody will contest against you in your re-election bid as governor of Enugu State in our party. Did we not achieve it?

“We went to our various wards and told our people not to contest against our Master. It later happened in Enugu State. We are equal to the task. Sleep with your two eyes closed,” he said.

Responding, Gov. Ugwuanyi thanked the PDP ward chairmen for their solidarity, kind words and renewed vigour and assurances to deliver all the candidates of the party in the forthcoming elections.

Endorsing Barr. Mbah, Gov. Ugwuanyi prayed that the PDP governorship candidate succeeds him in 2023, urging the ward chairmen to remain steadfast and give him (Mbah) the same support they are giving him, praying that his administration will finish strong and end in praise.

2023: APC asks court to disqualify all PDP candidates in Rivers