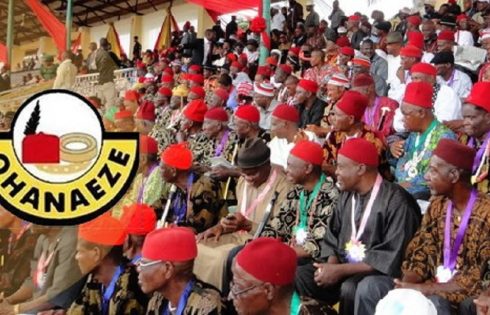 The apex Igbo socio-cultural organization, Ohanaeze Ndigbo has declared that the Presidential candidate of the All Progressives Congress, APC, Asiwaju Bola Tinubu is free to come and solicit for votes in the South-East.

Coalition of South-East Youth Leaders, (COSEYL), had asked promoters of the Tinubu Presidency to keep off the zone.

But the Ohanaeze Ndigbo Youth Council Worldwide, in a statement made available on Friday, cautioned the group against stoking unnecessary political tension in the zone.

In the statement signed by Mazi Okwu Nnabuike, the National President of OYC, he said it was unjustifiable for any person to ban Tinubu or any other person from soliciting for votes in the South-East.

Okwu said the Ohanaeze would not sit by and watch any form of divisive politics, which he described as “the major factor that has kept Nigeria down for such a very long time.”

The Ohanaeze youths maintained that “every Nigerian reserved the right to campaign for candidates of their choice, by marketing such a person convincingly to the electorate.

“Politics of bitterness and acrimony will not take Nigeria anywhere, especially as the country is presently operating at its lowest ebb. There is no doubt that the country has never been this divided and this is why campaigns should be on issues and not ethnicity.

“Having said this, we make bold to say that Tinubu’s promoters are free to campaign for him anywhere in Igboland.

“Similarly, other presidential candidates should also have a smooth sail in taking their campaign to every part of the country.

“Ndigbo remain a very accommodating tribe in Nigeria, known for their hospitality and we are never going to lose that status in spite of provocations.

“All we demand from the Independent National Electoral Commission, INEC, is a transparent process through which Nigerians would freely make their choice.”

“We advise all interest groups in the South-East, under whatever guise, to exercise restraint and not take actions that would lead to regrets in the future,” Okwu said.