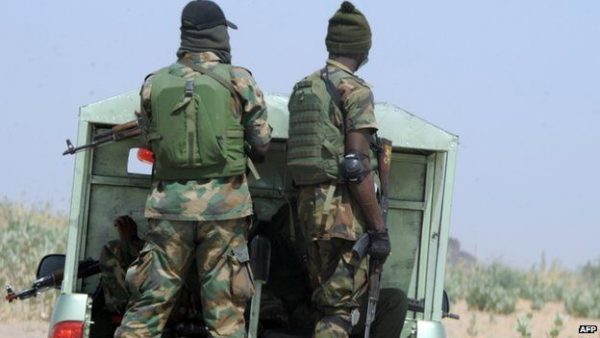 Soldiers attached to the Joint Security Task Force in Oyo State codenamed Operation Burst and personnel of the Amotekun Corps have started combing forests in the Surulere Local Government Area of Oyo State for criminals.

The security agents were deployed following the abduction and killing of a final year student of LAUTECH, Rachael Opadele; a United States-based hotelier, Mr Olugbenga Owolabi; and a motorcyclist, Mr Idowu Ajagbe, who conveyed the person bearing ransom to the kidnappers.

The three persons were killed after the hoodlums had collected a ransom of N5million and the bearer of the ransom luckily escaped with injuries.

Residents of Gambari community told our correspondent on Sunday that some suspected criminals were killed during the operations while some guns were recovered from where they were hidden by the criminals.

It was gathered that the security agents demolished the fence of a hotel and broke its window panes and doors. The hotel was said to be used as a rendezvous by criminals after their operations.

A resident, who did not want his name in print as a result of fear for his safety, said, “I went out to the farm where I was working around 6.30am and they stopped me and asked where I was going. I told them I was going to the farm. They searched my motorcycle and when they did not find anything on me, they asked me to go.

“But we started hearing gunshots far from our place since around 1am. The soldiers made some discoveries at around Sabo – Igbon.”

The Police Public Relations Officer in the state, Adewale Osifeso, could not be reached on the telephone to comment on the operation.

However, the Oyo State Amotekun Commandant of Amotekun in Oyo State, Col. Olayinka Olayanju (retd.), confirmed the development, saying security agents were on clearance operation in the area.

“We are on clearance operation there. That is what I know for now,” he said.

“The operation started few days ago and it extended to Gambari but I won’t say more than that,” Ajibola also said.

There are reports that a relative of the slain hotelier has been arrested by the police and that he blamed the killing on the devil.

But the Police Public Relations Officer for Oyo State Police Command, Adewale  Osifeso, when contacted told our correspondent that “the command  will update you soon.”

Meanwhile, a former Military Governor of Oyo State, Major General Oladayo Popoola; Justice Afolabi Adeniran and  a member of the Board of Trustees of the Peoples Democratic Party, Dr Saka Balogun, will lead other prominent indigenes of Ogbomoso as well as the youth of the town in a protest on insecurity in the town on  Monday (today).

The President of Ogbomoso Community Youth Forum, Rev. Kayode Olaleye, said this in a statement made available to our correspondent that the rally was to sensitise the people on security situation and to be vigilant