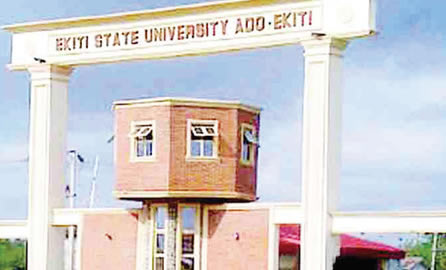 The management of Ekiti State Government-owned Bamidele Olumilua University of Science and Technology, Ikere Ekiti, has proscribed all the staff unions in the institution.

The acting Registrar, B.S. Momoh, said the step was necessary as the unions through their actions were distracting the university from its development vision and mission.

Momoh stated, “BOUESTI, being a new university, certainly does not need these distractions if it must develop properly to fulfil the vision and mission for which it was established. It has, therefore, become imperative to ensure that irresponsible acts like these are avoided in our university.

“After a review of the incidents and in line with the directive of Ekiti State Governor and Visitor to the university, the three trade unions in BOUESTI – ASUU, SNANU and NASU are hereby proscribed with immediate effect.

“Members of staff are hereby enjoined to go about their normal duties without fear and desist from getting involved in unlawful activities,” Momoh stated.

Reacting, the SSANU Chairman, G.O Olowolafe and his NASU counterpart, Adewale Animasaun, said the matter had been reported to their bodies’ headquarters.