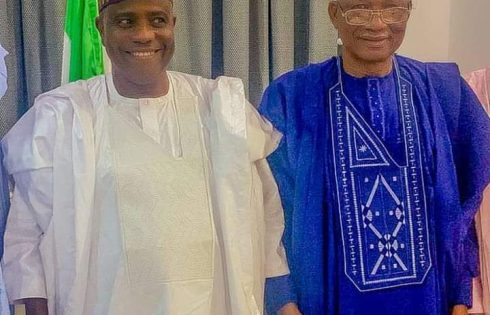 Sokoto State Governor, Aminu Waziri Tambuwal has received into the fold of the Peoples Democratic Party, (PDP) a chieftain of the All Progressives Congress, (APC), Hon. Dahiru Maishanu Yabo.

This was disclosed by Muhammad Bello, Special Adviser, Media and Publicity to Governor Tambuwal in a statement issued on Friday.

According to the statement, Yabo, a former Commissioner for Information, as well as Solid Minerals in the State, was received by the Governor, his Deputy, Manir Muhammmad Dan Iya, as well as the State PDP Chairman, Alhaji Bello Muhammad among other government officials at Government House, Sokoto on Thursday.

The new entrant, while giving reasons for his defection, claimed that his former party lacked internal democracy and was full of favoritism and bootlicking.

“The APC in Sokoto has formed a cabal of which you must be a member in order to have anything to do with the party or to be involved in the progress of the nation or the State”, Yabo said.

He, however, said now that he had switched allegiances, “by the grace of God, we’re going to support Team Tambuwal, the PDP governorship candidate in the State and all other candidates in the State under the PDP and even beyond, at the Presidency.”

Yabo, who was a founding member of the APC and member of the defunct ‘Amaechi for President’ campaign team, pledged to unveil his status and followership in his constituency within a fortnight.