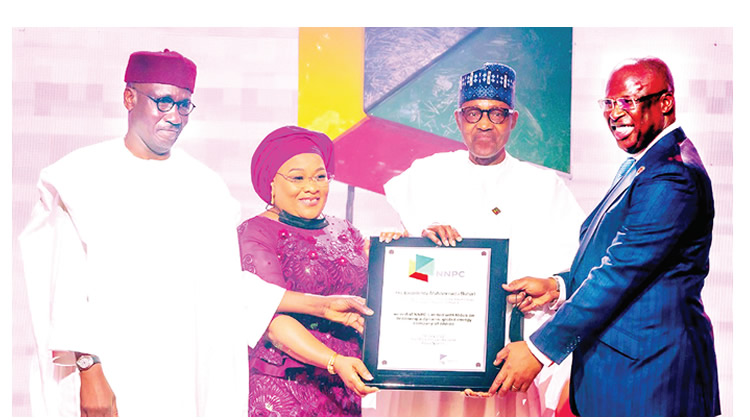 The Nigerian National Petroleum Company Limited on Tuesday made it clear that it would no longer remit any money to the Federation Accounts Allocation Committee for sharing to the three tiers of government monthly.

It said this was based on its latest transition from a public corporation to a limited liability company and that it currently owed no money to FAAC, as all monetary arrears to the committee were owed by the old corporation and not the new oil company.

This came as the President, Major General Muhammadu Buhari (retd.), officially unveiled the NNPC Limited on Tuesday and declared that the new entity was henceforth free from institutional regulations.

Buhari, who made this public at the Presidential Villa, Abuja, stated that the oil firm would from now on conduct itself under best international business practice.

Before its official unveiling as a limited company, the NNPC had failed to make any remittance to FAAC since this year. It had consistently deducted the amount it spends on fuel subsidy monthly, a development that had eroded the funds which it would have remitted to the committee.

Findings showed that between January and May this year, the oil company had spent N1.274tn on petrol subsidy, being the sole importer of the commodity into Nigeria. It, however, described its subsidy spending as under-recovery of a Premium Motor Spirit/value shortfall.

Speaking to journalists on the sidelines of the unveiling of the new oil company, the Chief Executive Officer, NNPC Limited, Mele Kyari, stated that the firm was now a private outfit and had nothing to do with FAAC anymore.

Responding to a question on what would happen to NNPC’s monthly FAAC contributions, kyari replied, “We are now a private company; would MTN go to FAAC?”

When probed further to tell if there would be no more FAAC remittances from the company going forward, he said, “We will pay our taxes, royalties and deliver dividends to our shareholders.”

Asked about the arrears to FAAC that were not delivered by the firm over the years, the CEO said, “Which arrears? That’s Nigerian National Petroleum Corporation.”

The NNPC explained some of the changes that had taken place or would happen based on the transition of the firm from a corporation to a limited company.

Kyari said, “You now have a smarter, more responsive and much more accountable company that must act within the premises of all regulations that are in Nigeria for private companies.

“It must also meet the standards of best practice in every industry in terms of governance, complying with regulations and beyond these, eyes are on the ball that your shareholders are expecting you to deliver value to them.

“That value must translate in two forms. One is that they must see dividends and the second part is that you must deliver energy in this country. This company is now in a position to do both of them because it is now a nimble company, can act, borrow and return peoples money quickly.”

He said the firm would now make decisions very quickly, get the best class of people anywhere in the world, inject them into the company and get its Initial Public Offer ready by June 2023.

“I am sure Nigerians will see a very different company in the coming days and months. And we are convinced that by the mid of next year this company will be IPO ready,” Kyari stated.

Proving further explanation, he said, “IPO ready means that you have systems and processes lined on the side of profitability and is a company that is accountable to its shareholders and stakeholders.

“Simply that is what IPO processes look for; to see that you have the assets. Today government has transferred those assets to NNPC and we have very ample assets that nobody has in this country and, of course, not even in Africa.”

Asked to explain how the oil firm would handle subsidy on petrol being a commercial entity, Kyari replied that fuel subsidy was not a burden of NNPC.

He said, “Subsidy is not NNPC’s burden. Subsidy is the decision of the state and in every jurisdiction anywhere in the world, countries see them differently. In some countries, they put petroleum tax on top of the market price of these products.

“So when decisions are to be made in some jurisdictions they will reduce the level of taxation. That also is another form of subsidy. In some countries, you have zero taxation but you will pay the market price for the commodity. That also in a way, in fiscal system, looks at it from a subsidy point of view.

“In very many countries, a leader can decide that I don’t even want my countrymen to buy it at the market price. I’m ready to reduce that price for them so that they can buy.”

Kyari added, “In either case, whichever way the decision and the policy of the state decides, you know NNPC is there in the space to provide the product to the state at commercial value and, of course, it is also our duty to deliver to the customer at the price that the state wants.

“So it is no longer an NNPC issue. NNPC will have no issue with this. NNPC will be happy to supply because we will now see the state as our customer.”

He further explained that the new NNPC had no need for a sovereign guarantee, as lenders would only ask for such when the company seeking the loan lacked access to its assets.

“Today the assets are in our books and have been transferred to us. That is what banks are looking for, and that is the reason why they ask for a sovereign guarantee,” he stated.

The NNPC boss denied claims that the company’s workforce was bloated, as he stressed that “today our total population is just 7,000 and I believe that with the expansion we have in the plan we are going to get more people to work for us.

“The law has also provided that no one is going to leave this company. Everybody’s work is preserved, their benefits are preserved. So there is no matter of concern for the employees of this company.”

Speaking earlier during the event, before unveiling the new company, Buhari declared that NNPC Limited was henceforth free from institutional regulations.

He said, “The provisions of PIA (Petroleum Industry Act) 2021, have given the Nigerian petroleum industry a new impetus, with improved fiscal framework, transparent governance, enhanced regulation and the creation of a commercially-driven and independent national oil company that will operate without relying on government funding and free from institutional regulations such as the Treasury Single Account, Public Procurement and Fiscal Responsibility Acts.

“It will, of course, conduct itself under the best international business practice in transparency, governance and commercial viability.”

The President said the government was transforming the petroleum industry to strengthen its capacity and market relevance for the present and future global energy priorities.

“By chance of history, I was privileged to lead the creation of the Nigerian National Petroleum Corporation on the July 1, 1977. Forty-Four years later, I was again privileged to sign the Petroleum Industry Act in 2021, heralding the long-awaited reform of our petroleum sector,” he stated.

“I therefore thank almighty God for choosing me to consistently play an important role in shaping the destiny of our national oil company from the good to the great.

“NNPC Limited will operate as a commercial, independent and viable NOC at par with its peers around the world, to sustainably deliver value to its over 200 million shareholders and the global energy community, while adhering to its fundamental corporate values of integrity, excellence and sustainability.”