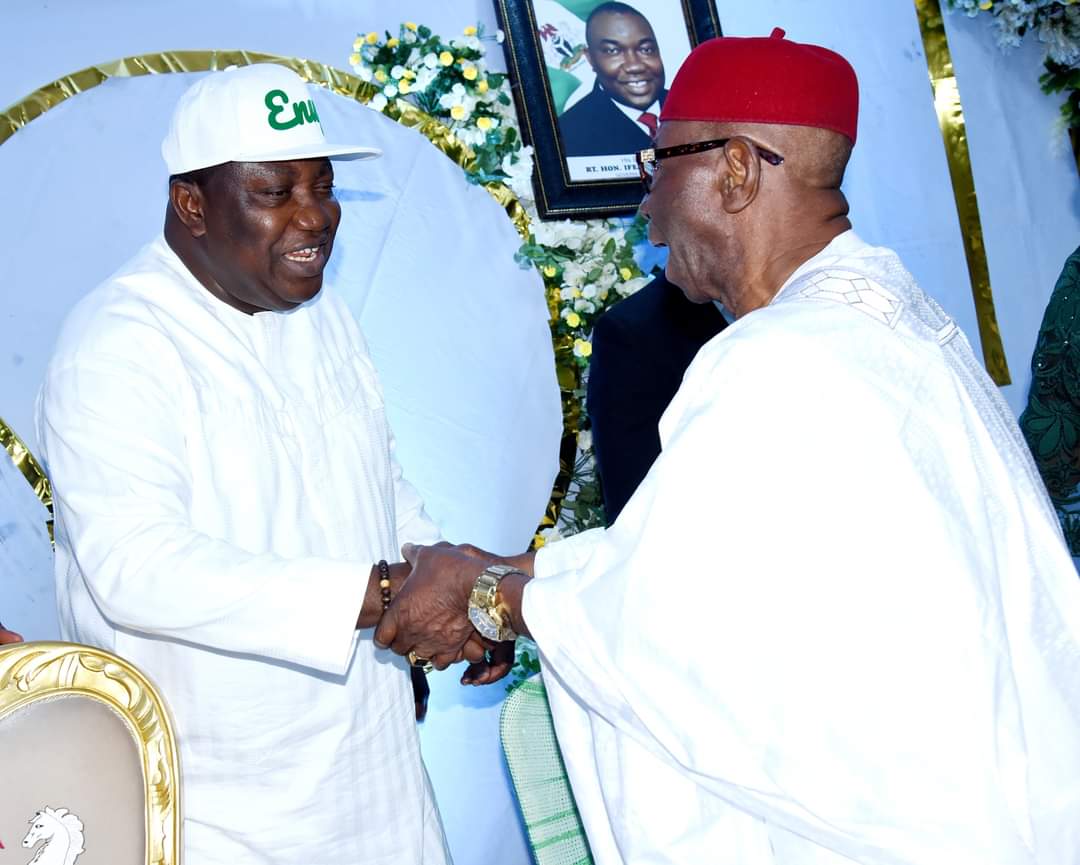 The National Leadership of the Nigeria Union of Pensioners (NUP) has expressed delight with Governor Ifeanyi Ugwuanyi of Enugu State for his untiring commitment to the welfare of the pensioners of the state in spite of the state’s lean resources and the nation’s economic challenges.

Speaking when Gov. Ugwuanyi hosted him at the Government House, Enugu, following his emergence as the new National President of NUP, Comrade Godwin Ikechukwu Abumisi, who is an indigene of Ezeagu Local Government Area of Enugu State and the first Igbo man to head the national leadership of NUP, described Gov. Ugwuanyi as “a pensioner and labour-friendly governor”.

According to him, “We have also listed the names of governors who are not paying pension and gratuity. I am so happy to inform you that our dear Governor (Ugwuanyi) and the government of Enugu State are not on that list”.

Comrade Abumisi, therefore, commended Gov. Ugwuanyi for his steadfastness, saying: “I want to say that I am very happy to associate with you. Having won the Presidency (NUP), we said it will be beautiful for us to come to Enugu and tell His Excellency that we have done so.

“We are here because this is the first time in our history, in the national history, in the history of the NUP, that it is our fortune to occupy the position of the National President of the Nigeria Union of Pensioners.

“The beauty of it all is that I am from Enugu State, from a little town known as Obeleagu Umana in Ezeagu LGA”.

On their part, the leaders of pensioners from Enugu State/South East Zone expressed profound gratitude to Gov. Ugwuanyi “for the compassionate love, respect and honour that you have meted to our extended pensioners in Enugu State”.

Speaking on their behalf, Comrade Dr. G.B Ugochukwu equally thanked the governor “for your labour/pensioner friendliness, regular payment of workers’ salaries, pension, security and infrastructural development in the state”, saying: “All these are possible because Enugu State is in the hands of God”.

Receiving Comrade Abumisi and his entourage, Gov. Ugwuanyi stated that it is heartwarming for an Enugu State indigene to occupy the exalted position of the National President of Nigerian Union of Pensioners (NUP).

The governor congratulated the New National President for attaining the enviable position, and prayed that he leads the Union with the fear of God as well as continue to provide the desired leadership for the benefit of millions of pensioners he represents.

On his administration’s commitment to the welfare of the state pensioners, Gov. Ugwuanyi represented by his deputy, Hon. Mrs. Cecilia Ezeilo, placed on record that the government on assumption of office inherited a backlog of gratuity running into billions of naira.

“To mitigate this challenge, the present administration undertook to set aside the sum of N100 Million monthly to offset the backlog of gratuities dating back to 2009.

“A committee was put in place to ensure utmost transparency. However, with the coming of COVID-19 pandemic and the resultant global economic downturn, we had to temporarily put it on hold to ensure that salaries and pensions are paid”, he said.

The governor revealed that the Enugu State presently has 12,000 pensioners in the government’s payroll with a monthly wage bill of N630 million.

He added that Enugu is one of the few states in the country that keyed into the payment of the new National Minimum Wage with its consequential adjustments in 2020.

“This has doubled the wage bill of the state. The above notwithstanding, this administration has continued to pay salaries on or before the end of every month”, he added.

Gov. Ugwuanyi, therefore, reiterated the cordial working relationship between his administration and the state pensioners, assuring that “we shall continue to fulfill our obligations to the pensioners given the resources available to the state”.

In their separate goodwill messages, the State Chairmen of Nigerian Labour Congress (NLC) and Trade Union Congress of Nigeria (TUC), Comrade Virginus Nwobodo and Comrade Bennett Asogwa, respectively, paid glowing tributes to Gov. Ugwuanyi for his sterling commitment to the welfare of the state workforce and pensioners.

They endorsed the verdict on Gov. Ugwuanyi by the National Leadership of NUP, maintaining that the governor is doing well for the workers and pensioners in spite of the state’s lean resources and nation’s challenges bordering on economy, security and public health.

According to the TUC State Chairman, Comrade Asogwa, “Your Excellency, I want to start by appreciating your efforts, the efforts of Enugu State government to better the lots of workers and retirees.

“We know that if you were not doing well, if you were not good to workers and the retirees, irrespective of the fact that the new National President of the NUP is from Enugu State, he would have not had any moral justification to come into Government House to present himself.

“He is associating himself with you because he knows that he can stand bold to say that you (Ugwuanyi) are doing well.

Present at the event include the State Head of Service, Ken Chukwuegbo, Commissioner for Labour and Productivity, Hon. Uchechukwu Ogbonna, the Executive Secretary, Local Government Pensions Board, Barr. Nana Ogbodo, Wife of the new NUP National President, Mrs. Josephine Abumisi, members of the National, Zonal and State Executives of NUP, among others.