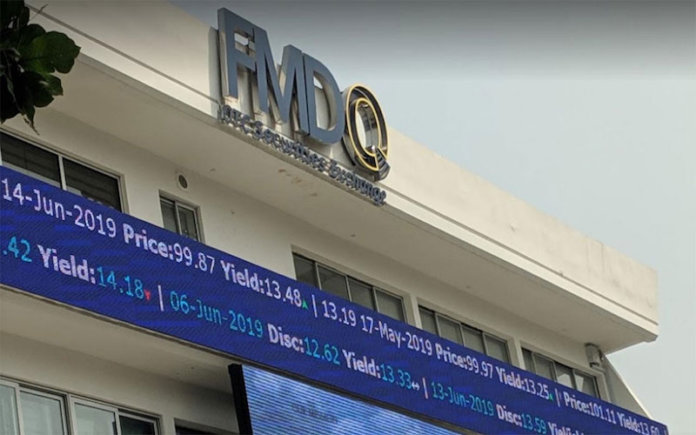 Following foreign investors’ exit and low yield environment, the total turnover of
FGN Bonds, Eurobond, among other bonds on the FMDQ Exchange market dropped by 26.24 per cent in 2021, data gathered by THISDAY has revealed.

According to THISDAY findings, a total turnover of N20.31trillion worth of FGN Bonds, Eurobonds, Agency, Sub-national, Corporate, Supranational Bonds & Promissory Notes were traded in 2021 as against N27.53trillion traded in 2020.

FMDQ Exchange served as a critical Exchange for issuance and government to access debt capital needed for capital projects.

Recently, the Debt Management Office (DMO) announced that the federal government raised $4 billion through Eurobonds and listed its $3 billion in three tranches for investors, offering up to 8.6 per cent for a 30-year tenor.

The Eurobonds issued, was for the purpose of raising funds for the new external borrowing of N2.34 trillion or about $6.2 billion provided in the 2021 Appropriation Act to part finance the deficit.

The debt office had revealed that federal government in 2021 raised N2.72 trillion through FGN Bonds.
Analysts had urged the government to ensure that the debt being incurred is used to improve on the country’s growth.

Commenting on the debt level of the country, analysts at Coronation Merchant Bank noted that as a percentage of total GDP, Nigeria’s public debt burden is relatively low compared to peer emerging market economies.
They however noted that the onus is on the federal government to make productive use of the borrowed funds to improve GDP growth and by extension, ensure economic development.

“The 2022 FGN budget has been pegged at N16.4 trillion. The FGN aims to earn N10.13 trillion to fund the budget and the resulting deficit of N6.3 trillion is expected to be financed by new external and domestic borrowings, privatisation proceeds, and multilateral /bilateral loan drawdowns, ”they stated

He added that there was significant Eurobonds issuances by the FGN and Corporates in 2021 that reduced activities in the secondary market.

On his part, analyst at PAC Holdings, Mr. Wole Adeyeye said: “With respect to the Eurobond, we had few listed corporate bonds on FMDQ last year. Many domestic companies did not issue Eurobond last year as depreciation of Naira may increase the repayment of these loans.”

Analysts attributed the decline to low FX supply to the specialized investors and exports window to weak intervention by the apex, stressing that the inflow in foreign exchange was another major contributing factor.

The Vice President, Highcap Securities Limited, Mr. David Adnori, said the decline in foreign exchange market turnover between January and December of 2021 was as a result of scarcity caused by the existing challenges of COVID-19 virus.

According to him: “A lot of the transactions in the foreign exchange market went to the parallel market that comes with higher price and the major reason for this is availability.”

He said the global trade has not fully recovered from the COVID-19 pandemic lockdown, leading to weak supply of foreign currencies into the Nigeria’s market.

He added that: “A lot of Nigerians in the Diaspora who used to send remits are also faced with the impact of the pandemic. Although, we have seen steady increase in crude oil price but the backlog of hard currency demand from CBN has also affected supply.

“Foreign investors are also showing interest due to challenges in their market. In addition, the federal government is also committed to foreign currency spending and it also contributed to supply.”

Adeyeye also attributed the decline in turnover trade at the FMDQ foreign exchange market to scarcity.
Commenting on the development recently, the Governor of the Central Bank of Nigeria (CBN), Mr Godwin Emefiele said the drop in crude oil earnings and the associated reduction in foreign portfolio inflows significantly affected the supply of foreign exchange into Nigeria.

He said, “In order to adjust for the decrease in the supply of foreign exchange, the naira depreciated at the official window from N305/$ to N360/$ and now hovers around N410/$.’’

He added, “Despite the rebound in economic activities, the fragile recovery will keep the economy operating below full capacity. The emerging food supply shocks associated with the drag in production, due to insecurity situations across the country, combined with the speculations on increase in the price of PMS and electricity tariff, will continue to have knock-on pressures that will keep headline inflation above desired levels.

“Inflation rate is nonetheless expected to continue to decelerate in the short-term. The outlook for the external sector remains stable, albeit susceptible to further external shocks. This is premised on the expectation of sustained improvement in crude oil prices. The ongoing policy on diaspora remittances is expected to attract foreign exchange inflow.

“Despite the optimism, downside risks to the outlook remains. Concerns over the emerging third wave of the COVID-19 in Europe and Asia could disrupt global supply chain and crude oil demand. In addition, vulnerability to foreign exchange pressure, rising inflation, insecurity across the country, infrastructure gap, and constrained fiscal space, remain a challenge.”