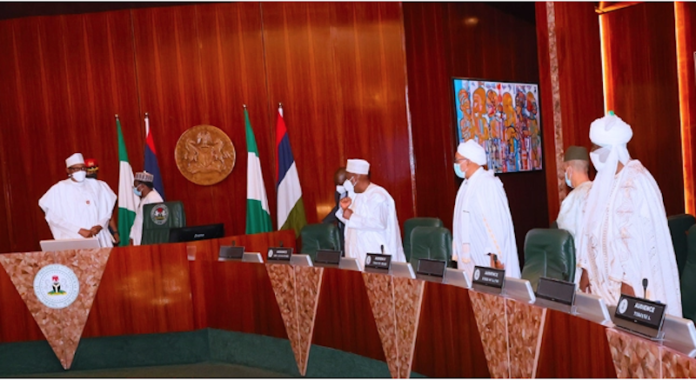 President Muhammadu Buhari yesterday hosted the Grand Khalifa (overall head) of the Tijjaniyya Islamic Movement World-Wide, Tidjani Ali Bin Arabi, at the State House, Abuja, and expressed happiness that Arabi and his delegation agreed to come and pray for Nigeria in order to surmount its security crisis.

Buhari expressed optimism that the nation would overcome the security challenges, while also praying to God to hear Nigeria’s prayer for an end to the crisis.

The President expressed his readiness to take on the terrorists by pursuing policies to eliminate the security issues facing the nation.
Buhari said his administration “is conscious of its responsibility” with regards to security and would continue to do its best.

He, therefore, urged Nigerians to be fair to his government in assessing the security issues in the country by reflecting on what obtained at the time he took over in 2015, and the successes, as well as the performance that marked a decisive break from the past, particularly in the North-east and the South-south, adding that the North-west, which had given the nation some “headache”, would soon experience a turnaround for the better.

President Buhari also advised Nigerians to take responsibility and show interest in their own security and complement what the government was doing.

He added: “We have done our best and we will continue to do more by pursuing coherent and consistent policies to deal with terrorism. I hope God will listen to our prayers.”
The President appreciated the Kano State Governor, Abdullahi Ganduje, who brought the Grand Khalifa to Nigeria, saying:

“We thank you for inviting them to come to pray for peace and stability in our country. We are grateful that they agreed to come.”
He joined them in praying that God gives guidance and strength to leaders to be accountable and do right in all the things that they do.

Earlier in his speech, Ganduje, while introducing the Khalifa and his delegation, which included the Emir of Kano, Alhaji Aminu Ado Bayero and Sheikh Dahiru Usman Bauchi, the leader of the Tijjaniyya Islamic Movement in Nigeria, said the government of Kano State invited the Tijjaniyya World Leader to the country to lead the faithful in prayer, considering the complexities around security in particular.

According to him, the visit of the Grand Khalifa had also rekindled the old ties between the Tijjaniya and the many cultural and educational institutions in Nigeria.

Also speaking, the Tijjaniyya leader in the country, Sheikh Dahiru Bauchi and the Grand Khalifa, Tidjani Ali Bin Arabi extolled the existing cordial relations between Nigeria and Algeria and prayed for guidance and blessings for the country and its leaders.

Commenting on the reason the Kano State Government invited the Grand Khalifa, Ganduje said it was aimed at developing a good relationship between Algeria and the city of Kano.
He said: “It is a kind of rekindling of the relationship because Kano is an old civilization, with so many Ulama (Ismamic scholars) from Algeria hundreds of years ago, who came to Kano to assist the development of Sharia leadership in Kano State.