2023 presidency: Not an easy road for South-East 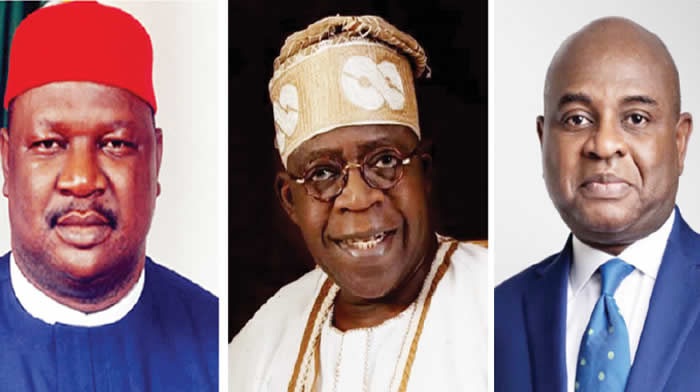 With the gale of declarations for the presidency so far, RAPHAEL EDE writes that the journey towards achieving a president of Igbo extraction by 2023 will not be a ride in the park

The past few days have shown that the race for the 2023 presidential election has begun, especially with the declaration of some prominent Nigerians from the southern part of the country.

Apart from former Senate President and Secretary to the Government of the Federation, Anyim Pius Anyim, who had announced publicly his intention to succeed the incumbent President, Major General Muhammadu Buhari (retd.), come 2023 former governor of Lagos State and National Leader of the All Progressives Congress, Asiwaju Bola Tinubu, recently visited Buhari in Aso Rock to formally inform him of his ambition.

While Tinubu will obviously be vying on the platform of the APC, Anyim, who was the first to declare his ambition, will test his popularity on the podium of the Peoples Democratic Party. It was after the declaration by the former governor of Lagos State that the Ebonyi State Governor, Chief David Umahi, and former Governor of Abia State and Chief Whip of the ninth National Assembly, Senator Orji Uzor Kalu, and publisher, Dele Momodu, joined the train.

A former deputy governor of the Central Bank of Nigeria, Prof. Kingsley Moghalu, has also declared his intent to become Nigeria’s president. Moghalu, who aspires to contest on the platform of the African Democratic Congress, was the presidential candidate of the Young Progressive Party in 2019. More are expected to join the race ahead of the 2023 presidential poll. Governor Yahaya Bello of Kogi State and former Vice President Atiku Abubakar are expected to declare their presidential aspirations in no distant time.

Tinubu had said after his meeting with the President that, “I’ve informed the President of my intention, but I have not informed Nigerians yet. I’m still consulting. And I have no problem consulting. I’ve not set a parameter of limitation to the extent of how many people I will consult. You will soon hear; all you want to hear is the categorical declaration. You’ve got that truth from me that I have informed Mr President of my ambition, and you don’t expect more answers than that.”

But among those who have declared their ambition for the number one position so far, those from the South-East are more in number. This could be an indication of the readiness of Ndigbo to take over the mantle of leadership in 2023 after Buhari must have completed his two terms in office.

Interestingly, on January 11, Ebonyi State Governor, Chief David Umahi, declared his aspiration to contest the presidency, less than 24 hours after Tinubu had declared his ambition. Briefing State House correspondents after consulting with Buhari, Umahi stated that he was not contesting the position with anybody.

Although Kalu has declared interest in the presidency, he, however, implied that he would be more committed to his aspiration if his party, the APC, zoned the presidential ticket to the South-East.

However, some are of the view that the realisation of a Nigerian president of Igbo extraction in 2023 will be dependent on whether the major political parties will zone the presidency to the South-East, otherwise their declarations would amount to nothing.

Recall that the former governor of Niger State, Babangida Aliyu, had on January 7, 2022 said the PDP had agreed to re-zone the presidency to the northern region despite its agreement that any candidate could contest the election.

Aliyu, who stated this when  the Atiku Support Organisation visited him in Minna, had said, “In our zoning agreement, we have agreed to re-zone to the North as requested by others, but we have agreed, and written openly as a result of what has happened that any candidate from any part of the country can now contest this election.”

Nevertheless, the PDP National Secretariat denied the claim, clarifying that it had not zoned the presidency to any zone. The party’s National Publicity Secretary, Debo Ologunagba, in a statement said the party had yet to zone its presidential ticket for the 2023 general election, describing the claims by certain persons as misleading.

Even with the placating words from the PDP, the road to achieving a Nigerian president of Igbo extraction appears not to be a smooth one as none of the two major political parties has declared which zone should produce the next president. Again, some are of the view that the Igbo are obviously not thinking of forging a common front by presenting and supporting one candidate.

Speaking on the chances of the South-East zone, the Chairman, Alaigbo Development Foundation, Abia Onyike, said, “It does not really depend on what the Igbo do or what they will say, it all depends on the kingmakers of Nigerian politics to decide whether to give it a try or not. The Igbo can consult, lobby and reach out to other power blocks on their quest for the Nigerian presidency, but it depends on the inclination of the Nigerian kingmakers to take up the issue for its actualisation or to vehemently oppose it.”

On his part, a professor of Political Science, Obasi Igwe, said many believed that Ndigbo deserved to produce the next President as a continuation of the affirmative actions in the process of the healing and mutual accommodation in Nigeria.

He said, “Many Igbo appreciated this prospective gesture and genuinely believed that that was one direct and easy way to reassure our youths and bring the angry agitations to an amicable close.”

But some wise individuals went behind and started arguing that the political palliative or affirmative action is for a ‘South-East’ not for the Igbo as a whole. Many of the most brutal episodes of the unfortunate civil war were in the riverine/Mbammiri and Anioma areas. So, how can a true Igbo healing process exclude them yet again when South-South zonal stalwarts had already been saying or implying that the Igbo cannot take a double share both in South-South and South-East?

Igwe, a former Dean, Faculty of Social Sciences, University of Nigeria, nevertheless, warned that the Igbo elite must speedily rescue themselves now, by returning to the original principle of Igbo, not “South-East” presidency, throw the competition open to everyone that is Igbo – it may well be that an Owerre, Elele, Agbor man or woman or whoever else gets nominated, but let there be justice and fairness to all.

‘My Goal is to Consolidate on Fayemi’s Achievements, Advance to the Next Level’