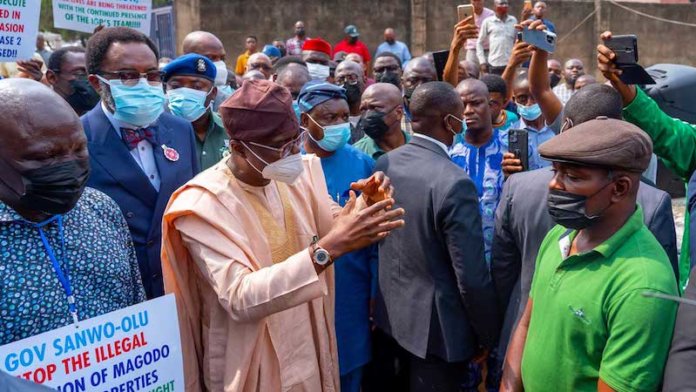 The Shangisha Landlords Association, Lagos, has expressed optimism in the recent intervention by Governor Babajide Sanwo-Olu in resolving the unrest in Magodo Estate, saying the governor will live up to their expectations.

There was unrest in Magodo Estate a few weeks ago when dozens of police officers and Shangisha Landlords Association converged at the estate’s gate to execute a Supreme Court judgment.

The officials had said they were acting on a Supreme Court judgment that mandated the Lagos State Government to give back 549 plots to the original owners of the land.

Chairman, Shangisha Landlords Association, Adebayo Adeyiga who said that the crisis started in 1984 through 1986, when the state government forcefully took parcels of land belonging to the association for Magodo Phase II Estate.

According to him, the situation about Shangisha escalated in 1984, when Lagos State Government came after executive members of the association.

However, in a move to end the land tussle between the Lagos State Government and the Magodo Residents Association, the Lagos Governor, Sanwo-Olu on Wednesday promised to provide 549 plots of land to Shangisha landlords.

Also speaking, lawyer of the association, Deji Fasusi said: “It is true that the court granted 549 plots of land to the judgment creditors, however, that was not all. The first order of the court to the Lagos State Government that the plaintiff should be granted first choice preferential treatment in the allocation of plots, and the second judgment was that 549 plots should be allocated to the judgment creditors.”

He said further that the Commissioner for Physical Planning and Urban Development, Dr. Idris Salako, had visited Magodo few weeks back and had promised that the government wanted a peaceful resolution, “then we told him that we were ready and we’ve been trying to reach out to prevent the narrative that we didn’t want to settle.” The lawyer noted however that today he is glad that the state government has decided to intervene in the matter.”