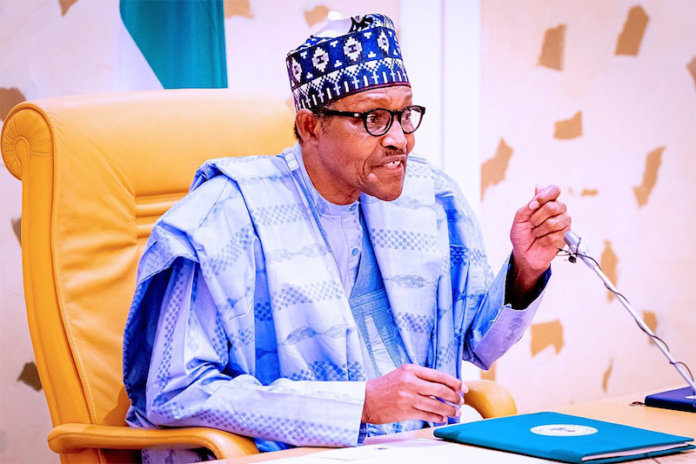 The Governors of the ruling All Progressives Congress (APC) have summoned an emergency meeting in Abuja tomorrow to pick a date for the party’s National Convention, in line with the advice of President Muhammadu Buhari that the party should put its house in order to avoid being kicked out by the opposition in 2023.

The Chairman of Northern Governors’ Forum and Governor of Plateau State, Simon Lalong, who disclosed this yesterday after a meeting with Buhari at the State House, Abuja, said “the party is still hopeful that a date in February is still feasible for the convention” during which new national officers of the party would be elected.

In a related development, five aggrieved members of the APC have commenced legal action in Abuja, seeking an order to stop the Caretaker and Extraordinary Convention Planning Committee (CECPC), under Yobe State Governor, Mai Mala Buni, from going ahead with the convention. This is the latest in the series of court cases rocking the party.

Lalong said: “You know when convention is coming, there will be fears here and there. Some people will tell you it will work,some will say it will not work. I don’t want to jump to conclusions, but the visit to the President has already assured us and you know that there is already a notice that all the governors are meeting on Sunday. By Sunday, we will tell you when we’re holding the convention.

“The President was raising his fears, but we’ve already given him assurances that nothing will stop us from having a very peaceful election. Some parties have done their own; the PDP did their own, nothing will stop APC from doing its own.

“So, all the fears that we’re talking about, which the President also re-echoed, are also telling the governor’s please do more, and keep the party alive. So, by God’s grace, we’re going to keep our party alive.

“Well, these are things we’re going to discuss, but I’m not drawing conclusion, but I always tell you that a political party is about interests, the interests may be the same, they may not be the same, but at the end of the day, what we’ll do is that we are going to elect people who are going to represent you.”

“But I just want to assure you that in so many ways, when we meet, we’ll harmonise all interests and we’ll come out as one APC and that’s what we’re hoping; that whatever will be the interests that we’re going to discuss, I have a very great hope that at the end of the day, our goal is to elect people who will take care of our party, because that will be the beginning of the process towards electing those who will take over from this present government.”

On whether the several court cases pending against the party and its leadership will not abort plans of the convention, the governor said: “There are procedures for holding court processes. Many of the court processes were there when we set up the caretaker committee, but up to this moment, if you go to take a census of some of the court proceedings, you will realise that a lot of them have been resolved out of court. So, it’s still the duty of the party, it’s still part of the functions of the party to resolve.

Asked if the APC would meet the speculated February 5 date for the convention in view of the need for mandatory 21-day notice to the Independent National Electoral Commission (INEC), Lalong said “Well, I’m not the chairman of the convention committee, but I want to assure you that we’ve called a meeting for Sunday and if there is a meeting on Sunday, and you’re thinking about next Friday. Just wait and see what will happen before next Friday. I don’t want to draw conclusions now.
“You’re already talking of litigation, you draw conclusions, somebody will go and file a case tomorrow. So, I don’t want us to draw a conclusion on that, but I want to assure you that we are meeting. We already sampled the minds of many of the governors.

“We’re very hopeful that we’re going to get a date and then with the admonition given by the President, it’s a warning signal to all of us to sit up and ensure that we have a seamless, very clean, fair and transparent convention so that our party will not get disintegrated.”

Five aggrieved members of the APC yesterday commenced legal action to stop the planned National Convention of the party by dragging the CECPC, under Yobe State Governor, Mai Mala Buni, before a Federal High Court in Abuja.
The aggrieved members want the court to issue an order restraining the Buni-led CECPC from going ahead with the convention.

Recall that some members of the APC are clamouring for a change in date of the scheduled national convention.

The suit dated January 4, 2022, has as plaintiffs, Suleiman Usman, Muhammed Shehu, Samaila Isahaka, Idris Isah and Audu Emmanuel.
The APC, Buni and the Independent National Electoral Commission (INEC) were listed as 1-3 defendants in the court processes.

The plaintiffs are praying the court for an order to stop the convention on the grounds that state congresses are yet to be completed in all the 36 states of the federation.
Lawyer to the plaintiffs, Olusola Ojo raised five questions for the court to determine and also sought eight declarative reliefs.

One of the reliefs included “an order of this Court restraining the 1st and 2nd defendants from organising and conducting the national convention of the 1st defendant unless state congresses of the 1st defendant were first concluded in all the 36 states of the federation and the Federal Capital Territory.”

With the National Convention of the APC being threatened by a plethora of crises, the ruling party may have resolved to come down hard on some erring members to ensure discipline and position the APC to retain power in 2023, THISDAY has learnt.

APC’s planned disciplinary actions are said to be fully supported by President Buhari who wants to leave behind a peaceful and united party in 2023.

According to the President, the ruling party would shoot itself in the foot if “it fails to resolve the disunity and lack of agreement amongst members of the party.”
Therefore, the decision of the party to sanction some erring members is in tandem with the President’s position to instill discipline within the party.

A source close to the APC National Secretariat in Abuja, who preferred anonymity, said the APC was considering “very serious and severe disciplinary measures against some people whose activities and utterances are threats to the health of the party.”

The source adds: “I can tell you categorically that the party is coming down heavily on some party members whose actions are becoming dangerous for the unity of the party. Some of the individuals involved are high-profile.

“I am aware of two governors that have been pencilled down for disciplinary action. One is from the North-west while the other is from the South-west. The governors are said to be throwing stones at the party through their agents. Also, two former governors who are working against the APC secretly have been identified and will be sanctioned at the appropriate time. Also, some Senators and House of Representatives members are fingered in a secret report at the disposal of the party.
“A minister from the South-east was also said to have been working against the interest of the party. The party may soon unmask these characters and deal decisively with them.”

The source further said “a meeting will be scheduled shortly to address this matter.”
According to insiders at the party’s headquarters, the desperation of some individuals, especially aspirants for the national chairmanship seat of the party, and groups within the APC remain a big threat to the peace and stability of the party.

Another highly ranked member of the party, who does not want his name mentioned, wondered why some aspirants for the national chairmanship seat of the APC want to “derail the party at this critical period instead of helping to build it and consolidate on the gains so far achieved by the Buhari government.”

He adds: “There has to be APC first for these aspirants to realise their aspirations. APC is a big family and it has the capacity to accommodate all interests. Buni is working tirelessly to hold the party together and he needs the support of every stakeholder in order to take the party to greater heights. Buni is not contesting for the party’s chairmanship seat. He will be seeking reelection in Yobe State as second term governor.

“Some political parties have predicted that APC will implode. But I have good news for them – APC will never implode. It’s one united family. We have internal mechanisms we use in settling matters with dispatch. APC is the party to beat in 2023.”

In the same vein, a group within the APC called Progressive Initiative For Change and Development has called on the leadership of the APC to ensure all crises in the party are resolved amicably before any National Convention is conducted.

The National Coordinator of the Group, Chief Donatus Okereke told journalists in Abuja that the party was clearly not ready for a National Convention with the crisis engulfing some state chapters, urging the national leaders of the party to ensure “proper and thorough reconciliation” before any National Convention is staged.

The Director General of Progressives Governors Forum (PGF), Dr. Lukman Salihu has called on Buni and the Secretary of the party’s CECPC, John Akpanudoedehe to resign honourably if they can’t conclude preparations for the party’s convention.

Lukman stated this in a letter dated January 5, 2022 titled, “APC National Convention: Urgent Matters for the Survival of APC,” and addressed to the Chairman of PGF and Governor Atiku Bagudu of Kebbi State.

The director-general also copied President Buhari and key party leaders in the letter which was sighted by THISDAY.

Lukman recalled that on Monday, January 3, 2022, he sent an open letter to all APC leaders titled “Plausibility of February 2022 APC Convention”, which highlighted some of the reasons the APC National Convention should not be postponed.

The party chieftain pointed out that leaders of the party must understand that the survival of the party was at stake and any attempt to continue to contemplate postponement of the Convention means gambling with the future of the party, which he said was unacceptable.

The party chieftain said the failure of the Buni-led Committee to implement decisions makes APC leaders complicit and therefore agreeable to acts that are injurious to the survival of the party.
According to him, the insinuation in the public is that the reluctance of Buni to proceed with implementation of the decision to hold the APC National Convention on February 5, 2022 as agreed was because governors want to continue to control the party, which to the best of my knowledge is not true.

Lukman stressed that some commentators both within the party and in the public have argued that there are deliberate efforts to prevent the convention from holding on February 5, 2022, which was why the CECPC did not make any public announcement or begin to make any preparation.

The director-general said that APC leaders should imagine the consequences of ruining the electoral potentials of the party in 2023 such that beyond losing the federal government, self-implicated legal challenges are created to weaken the electoral prospects of the party simply because of actions or inactions of the CECPC, especially Buni and Akpanudoedehe.