A Note on the Kwara Journey 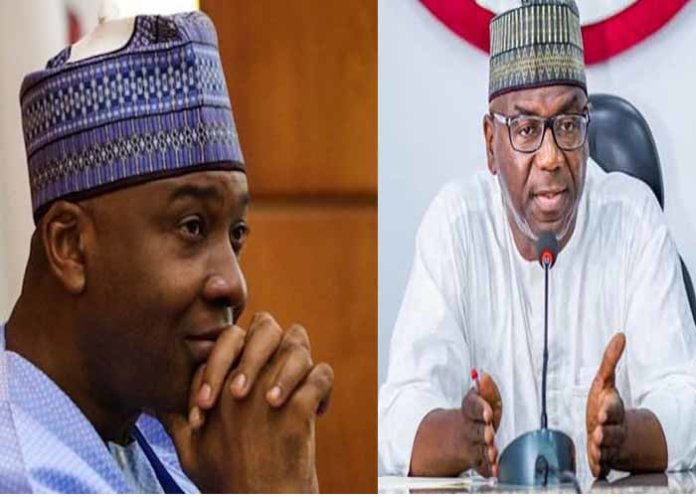 On October 26, 2021, former Senate President Bukola Saraki was on a national television to attempt a rebrand of himself ahead of the 2023 election. In what many have called his signature conceit and the groupthink into which his beleaguered camp has sunk, the politician said the people of Kwara had misjudged his dynasty. He feels Kwara was better off in 2019 — the same truthiness his henchmen and social media kamikazes have latched onto.

American satirist Stephen Colbert defined truthiness as a situation whereby people make claims they desired to be true even when there is no evidence to support that. For the former Senator and his followers, what unseated the dynasty was propaganda. This claim, in itself, is an unforgivable crime against the people who lived the grim realities and indignities of his ironfisted rule. Nobody got anything in Kwara except through and from them. But there is a group feeling among the Sarakites — with perhaps a few exceptions — that they were never wrong and that they cannot be wrong. It is what pushes them to deny what everyone knew about the Kwara story.

2022 will see a ridiculous spike in how Sarakites ‘create their own realities’, apologies to Karl Rove. Before that happens, it is important to remind them, and anyone who may be listening to or echoing them, where Kwara was in 2019 and where it is now.

As Sarakites bade public office farewell in 2019, data from the National Primary Health Care Development Agency (NPHCDA) DHIS2 platform showed that maternal mortality ratio in Kwara was 1,404.4 per 100,000 deaths. That was the second highest in Nigeria after the insurgence-wracked Borno State. Given the situation of Borno, it is only fair to say Kwara actually wore the ignoble crown. At the end of 2020, maternal mortality ratio for Kwara came down to 20.7 per 100,000 live births, the second lowest in the country after Ekiti.

The difference between pre-May 2019 and 2020 is leadership, its priorities, and understanding of what constitutes development. For years, UNICEF and other development agencies left Kwara. Supplemental immunisation dropped drastically due to non-payment of counterpart funds by the state. Basic healthcare facilities collapsed statewide. As of 2019, the Kwara Primary Health Care Development Agency had just a nurse to itself. You read that well. Consequently, attendance in public primary hospitals hit a record low of just 43,936.

Between 2019 and now, Kwara has attained the status of a ‘State with High Political Will and Commitment’ in public health sector spending for obvious reasons. At 81.3%, 83.4% and 75.3% respectively, the capital spendings in the health sector for 2019, 2020, and 2021 have obviously been staggering. The results are glaring in the quality and quantum of facilities. From one nurse in 2019, the Primary Health Care Development Agency now has 44 nurses, a 4,300% raise. Supplemental immunisation is back. Rollback malaria programme is active. At least 27 primary healthcare facilities have been fixed across the state. The results are rewarding. To date, attendance in primary healthcare has risen to 306,328, representing 597.2% increase in public confidence in the system. Infant mortality is down from 2.6 in 2019 to 0.4 per 1000 live births at the close of 2020, while under-five deaths slowed to 0.4, down from 4.8 per 1000 births in 2019. In 2019, Kwara came a woeful 36th — second only to Oyo — in the National Lot Quality Assurance Survey (LQAS), which determines the level of coverage for immunisation in each state. All of its 16 local government areas failed the survey. By 2020, however, Kwara had moved to 18th position in the survey authored by the NPHCDA. The health insurance scheme has taken off, with tens of thousands of indigent families onboarded for free care, while a few corporate bodies have signed off to it.

Kwara had not a single life-saving modern gadget like ventilator and defibrillators, among others, until ‘O’toge’ happened. Basic things were not available and that naturally drained the University of Ilorin Teaching Hospital which is ordinarily a tertiary facility. Things have changed. General Hospital Ilorin is ‘lit’ now: fixed with modern lifesaving medical gadgets and a detached intensive care unit that is the largest and best of its kind in the region. On top of that are the new accreditations that are a first for the hospital. From the abysmal 79,408 attendance in public secondary facilities in 2019, the state recorded 1,181,776, or 1,388.23% increase, attendance by the end of 2020. To date, no fewer than 14 secondary facilities have been worked on across the state. More than four decades after, the Otoge administration is fixing the Oro General Hospital, easing the decades of suffering in that corridor. Lafiagi General Hospital is seeing a historic transformation. Number of doctors rose 28.6% between 2019 and 2021, owing to new recruitments. Efforts have now been activated to stop the attrition in the sector with significant pay raise for doctors and other health workers, and a commitment to do a lot more.

In 2019, only 6,725 households were connected to public water sources in Kwara State. However, none of these households was getting water since the waterworks were either non-active, inoperative even as water corporation workers were on strike for lack of salary payment. Public water supply was not active in 2019, leaving the people at the mercy of politicians who moved round with water tankers in exchange for votes. This has changed. To date, the administration has increased the number of households connected to public water supply to 10,426, or 55%, with defined access to potable water. Number of public water stand pipes has risen by 1,107 more, or 72.31%. Measured against the population of the state, the figure is low but it represents a significant turnaround in the system. The administration has not only revived many of the moribund waterworks, including the one in Oyun, it is also building two new ones in Jebba (Moro) and Dumagi (Edu).

A major legacy of the dynasty was the ghostly nature of the Kwara hinterlands. That was a function of many things, atop of which is the lack of basic amenities like functional schools with teachers, healthcare facilities, drinkable water, and access roads. Most schools in the Kwara hinterlands were without teachers, worsening the out-of-school children syndrome and drastically reducing the quality of education. In Isin and Oke Ero local governments, for instance, less than 50% of their senior secondary school teachers’ needs were met. Kaiama had just 68 teachers, falling below 45 percent of its needs, across its vast communities. Patigi had just 121, while Ekiti boasted just 135.

Apart from fixing access roads and making sure that the basic healthcare facilities are modestly functional in the far-flung Kwara countryside, the Otoge administration has done so much to bridge their teaching requirements, including employing 2000 teachers for the Teaching Service Commission. It hired 120 new senior secondary school teachers in various subjects for Isin local government alone, representing 109% more than what it met. For Ekiti, 123 more teachers were engaged, representing 91.1% increase. Additional 80 teachers, representing 66.1% increase, were hired for Patigi. 50 new competent teachers (73.5% increase) were employed in Kaiama. At the basic schools, 2,701 more teachers were engaged to fill vacancies across the state, while various renovation or remodelling works are ongoing in 2,185 classrooms. Compared with the 2,379 dilapidated classrooms inherited in 2019, that is 91.85% less in the 2019 needs assessment. The icing on the cake is that Kwara is now a proud member of the Universal Basic Education (UBE) family in Nigeria. Kwara recently bested the whole of Nigeria at the President’s school debates. Some three years ago, the state was a pariah as it battled with an official blacklist provoked by its unlawful diversion of money meant for renovation of schools. This year, Kwara is joining Edo and Lagos to drive phenomenal change in basic education by introducing cutting-edge technology in public schools. It is called KwaraLEARN.

From a state notorious for annual rituals of deaths and negative media headlines arising from stampede bred by prebendal politics, Kwara today runs the largest and most transparent social investment programme at subnational level, including the bi-monthly stipends (Owo Arugbo) for vulnerable senior citizens. Do a mental picture of an elderly woman receiving state support under the most dignifying condition and that of her contemporary who, at the mercy of some wild boys holding horsewhips, spent hours in the sun queuing to get N200 and a wrap of semo. Nothing more best captures the situation of Kwara in 2019 and now.

Senator Saraki and his men are entitled to their opinions as democracy permits but they are not entitled to their ‘alternative’ facts. Kwara has not reached the Canaan Land but it has since left Egypt. The penury, the depth of deprivation, and the horrid infrastructural deficits that the Otoge administration is fixing are their legacies. It is a joke taken too far to expect, for instance, that those basic schools left to rot since 2013 when the state came under the hammer would all be fixed in a space of four years and by an administration that inherited billions of naira in unpaid salaries, pension, gratuity, and promotion arrears that sometimes dated back as far as 2012. Such things take time to fix and the AbdulRahman AbdulRazaq administration has shown good faith. To date, promotion arrears for the senior secondary school teachers have been sorted. Long abandoned to suffer with inconsistent salaries and career stagnation, teachers at the basic schools (SUBEB) now get their pay as and when due and are in the queue to get their well-deserved promotion arrears for the first time since 2017. From a state notorious for not paying pensioners in 2019, the Nigeria Union of Pensioners has just listed Kwara among the seven states that are up-to-date in monthly pension payment, bar the burdens inherited from 2019. From a paltry and inconstant N30m monthly release for gratuities in 2019, the Otoge administration now releases a minimum of N100m to pay gratuities every month. That is 233% more than the 2019 threshold!

One is tempted to believe that the whole argument from the deposed dynasty is sheer doublethink or revisionism. They know too well that they played ‘god’ and failed the people of the state — as every indices point to — but they needed to put up a straight face that nothing actually happened. George Orwell must be turning in his grave to see this new height of doublethink. Followers of the dynasty have mostly been indoctrinated to think that way to be able to speak in favour of the sordid past.

Notwithstanding the atrocities committed against the people of the state, such as blocking people’s rise on account of political difference, the messy sale of public properties to themselves at giveaway or zero prices, and the years of giving the impression that they ‘owned’ the state, it is hard to believe that they appear to have convinced themselves that the people have forgot and would simply reward them with a new mandate in 2023.

They struggle to manufacture their own facts to create a false equivalence with the new administration. While the present administration lays no claim to perfection, there is simply no meeting point with the sordid past, which, like most dynasties in world history, had simply reached the height of its infamy — having, in the words of Ibn Khaldun, been ‘seized by senility and the chronic disease from which it could hardly ever rid itself and for which it could find no cure’. If you think this is not true, wait until Senator Saraki reminds Kwarans in his next interview that they were simply emotional, foolish and ungrateful to have voted him out in 2019 and that they are now sorry about that.