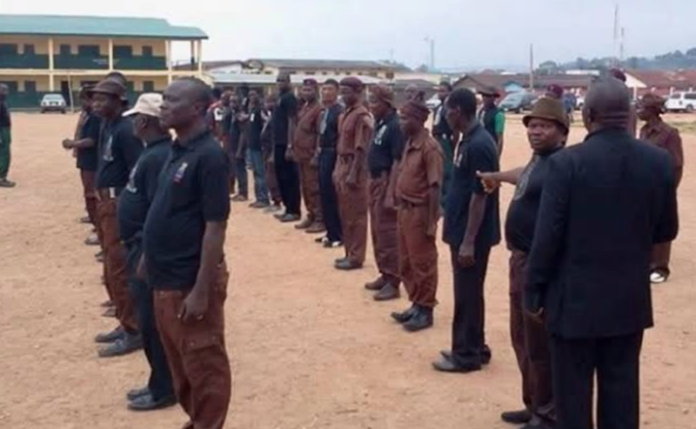 As part of efforts to collaborate with the state government to curb criminality, the Egume Ome Descendants Union (EODU) in Kogi State at the weekend inaugurated no fewer than 350 Vigilance Guards, known as “Akogu-Omaga Vigilance Guards in Egume in Dekina Local government area of Kogi State.

The national President of EODU, Alhaji Mohammed Lawal Ibrahim, while speaking at the inauguration ceremony held at Ome Community Secondary school Egume, said the security committee and the inauguration of vigilance group became necessary sequel to the rising insurgency and criminal activities in the area that almost made Egume a war zone.

He, therefore, admonished the group and all other security personnel to be very active in ensuring peace and security in the area at always, adding that, “security is everybody business and should be the utmost concern of all citizens of the community.”

The national president stressed that members were recruited from all the three political wards within Egume environs, stressing that the aim was to curb harbouring of criminals and prompt arrest of any possible escapee.

He pointed out that the activities of kidnappers in recent times scared personalities from visiting their country home during festive season despite the efforts of some security agencies.

He further disclosed that the union had spent over N2 million on the uniforms, personal ID cards, NIN data capturing, torchlight and other working tools for the group to enhance their performance.

Ibrahim who attributed the current economic woes and the challenge of food insecurity in the country to insecurity on the farms. These he listed to include kidnapping, herders/farmers clashes, among others and appealed to government to rise to its challenges by doing the needful to encourage agricultural production, protection of lives and property.

The president therefore commended some individuals and branches of EODU for their financial support and exemplary leadership, especially the facilitating of four hospital bed units to Egume general Hospital by the Lokoja branch recently.

He lamented the security challenges, especially kidnapping and incessant attack on farmers in Egume area in the recent times that he said posed a lot of threats to low food production and development of the community, adding that the formation of herdsmen/ security committee had enhanced peaceful coexistence between farmers and herdsmen.

Ibrahim who was unanimously re- elected for the second term as the President of EODU reiterated his commitment to ensure sustainable peaceful coexistence among the people of the community so as witness progress in the land.

In his remarks, the Onu Egume, Alhaji Etila Ajeka who was represented by the Amana- Attah Ojikpadala, Chief Mohammed Atogijo Onu stressed that the fight against insurgents was a collective efforts and called on the rural people to always expose crliminal elements in Curbing Criminality.

He commended the national body of the Egume Ome Descendants Union for their zeal and determination to work in synergy with the government in fighting criminality in the society.

Sani Musa, the Man Who Wants to Re-engineer APC

Deborah: Nigeria sitting on keg of gunpowder – Fani-Kayode on killing of Sokoto student