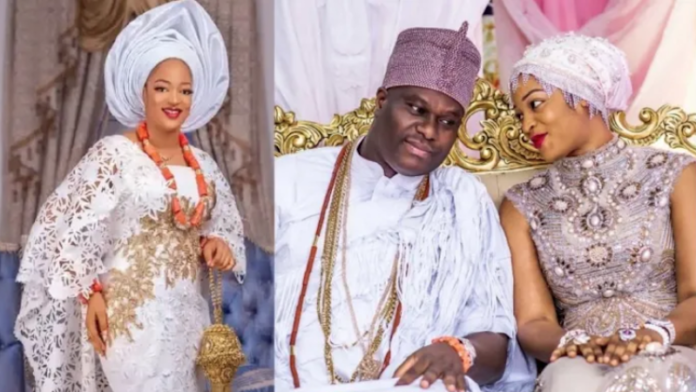 Although the palace, which earlier maintained silence, came back to say divorce being a two-way thing, could not be announced by a party, even though there was an unconfirmed account, which disputed the claims of the Olori as untrue.

At the same time, a Yoruba interest group, Igbimo Apapo Yoruba Lagbaye, has described the development as a sacrilege to the royal stool of of Ife and the entire Yoruba race urging the people of Yoruba to remain calm and resolute to the cause of preserving the sacredness of the tradition and unique value of the throne of the Ooni of Ife.

But, according to the queen, she had tried to make the union work, unfortunately, the monarch’s public identity was at variance with “his true self”.
The fair-skinned ex-queen wrote: “I did my best to endure and make it work. Many times, I smiled through the struggle, but I have finally realised I had just one assignment: my son, and when God is done, He is done. He chose Saul to be king, and when He was done, He told the prophet Samuel I have moved on.

“Religion was never an issue between us; please refer to my interview on News Central TV. Instead, His Majesty has a picture he would love the world to see and perceive him as and another one which is his true self.”

She, therefore, declared: “Today, I announce the beginning of a new dawn and the close of a chapter. Today, I am a mother to God’s unique gift. I am no longer a slave to my thoughts of perfection. I, at this moment, announce that I shall no longer be referred to as wife to the Ooni of Ife or as Queen of Ile-Ife, but as the Queen of the people and mother of my adorable Prince.”

Also addressing some allegations, Silekunola said her “decision to move on did not come because his majesty is married to another queen”, but added that, “As many would love to assume, throughout our life as a couple, I was the only married wife to him. There were side attractions, but it was never an issue.”

THISDAY gathered from a palace source that up to the time of filing this report, the palace neither denied nor confirmed the true position of the situation, thus putting a doubt on the other account which dismissed the divorce announcement as untrue.

Interestingly, Naomi’s divorce makes it the second since Ooni assumed the prestigious stool. Ooni, on assuming the throne of his fathers, married Olori Wuraola Zaynab Otiti, who left in 2017.
But the palace image maker, Moses Olafare, who initially declined calls, later said separation was a two way affair and not something announced by one party.

He said the announcements of separation is subject to agreement by both parties, so, to that extent, the palace was not aware of such separation, because “we all went to bed last night having the king and queen being together.”

According to him, “So, if by this morning, the queen went to her social media to write that she is no longer in marriage with Ooni, we will look into it to see whether or not the Instagram page truly belongs to her, and to know the reason behind it.

“If he is not in love with her, he cannot be doing that, only to wake up the following morning to hear from public that she was no longer in the relationship. In fact the Christmas gift has been delivered to her already,” he disclosed.

Meanwhile, the Igbimo Apapo Yoruba Lagbaye, an umbrella body for the Yoruba Council of Youths Worldwide and Yoruba Council of Women Worldwide, alongside all her affiliated groups, said it was “aghast to read just like millions of people from all works of life on the verified pages of social media platforms belonging to Olori Naomi Silekunola Ogunwusi’s Facebook and Instagram handle declaring herself divorced and separated with immediate effect.”

The group, in a statement by its President, Aare Oladotun Hassan, said, while her action had caused monumental embarrassment to the throne, “the Yoruba race and all lovers of the Ooni globally, we deplore this most condemnable act of disrespect aimed at devaluing the age-long tradition of the Arole Oduduwa Olofin Adimula throne.

“We wish to clarify that the throne had its modus operandi and thorough orderly guiding principles, wherein it is totally unheard of for an Olori Ooni to frivolously and peremptory announce her divorce on the pages of the social media.

“We have a tradition in Yorubaland that respects and values the woman, however, it seems the Olori failed to realise that being married to the Ooni estopped a woman from public display of tantrums and ridiculous misrepresentation of facts.

“We are firmly pleading with His Imperial Majesty, Kabiyesi Ooni to look beyond the current travails and obstacles as a passing wind, see the bigger picture of how all of us from diverse backgrounds support and express our unending love for His Majesty.

“Kabiyesi Ooni Adeyeye Enitan Babatunde Ogunwusi, Ojaja II, The Ooni of Ife, is an embodiment of God’s love for humanity. No matter what evil predetermined picture anyone may want to paint of the Ooni, we enjoin Kabiyesi to keep focused and determined to steer the ship of unity and development of the Yoruba race to an expected promised land.

“We are using this medium to serve a note of warning to anyone or group abusing or using the name of His Imperial Majesty, Ooni Adeyeye Enitan Ogunwusi, in a most condemnable manner to henceforth desist from such sacrilegious misconduct. We have emphatically spoken.”

Also, another Yoruba self-determination activist, Rasaq Oladosu, said, “We watch with utmost dismay the narrative in the media surrounding the Oonirisa and his alleged estranged wife.

“While we respect the privacy and the rights of the ex-queen to steer her affairs in the manner she so deems fit, it is imperative to note and state that the Ooni, beyond being the traditional leader of the entire Yoruba race, is an age long institution in himself.

“Thus, the sacredness of his position and office precludes him from issues such as this. While the Ooni may not be able to make comments in the media, we will not stand by and allow the office of the Ooni and by extension, the entire Yoruba race to be denigrated.”

Presidency Raises the Alarm over Planned Terrorists Attack in Abuja

Buhari in Borno, Promises to Cater for Families of Dead, Wounded Soldiers