Buhari in Borno, Promises to Cater for Families of Dead, Wounded Soldiers 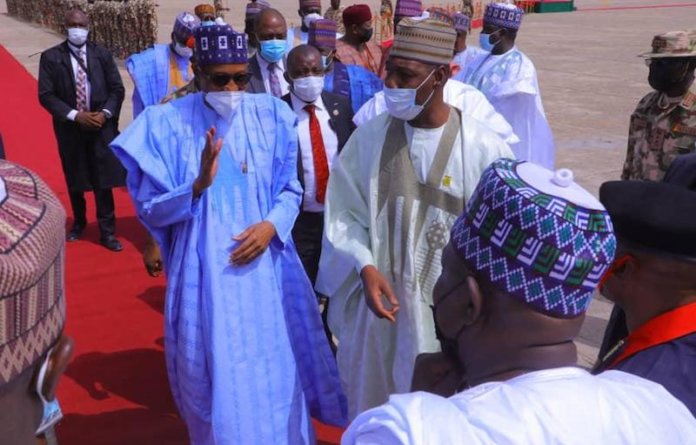 President Muhammadu Buhari, yesterday, said his administration would support families of dead and wounded soldiers, and help them realise their potential. Buhari stated this in Maiduguri, the Borno State capital, when he addressed troops at the Nigerian Air Force Base.

In a related development, the president stated that with the acquisition of more capability in military technology and hardware, the country was better prepared to deal with terrorists, especially in the North-east. Buhari gave the assurance on yesterday in Maiduguri after inaugurating some projects donated to the University of Maiduguri by business mogul, Alhaji Muhammadu Indimi.

Buhari, who addressed troops at the Nigerian Air Force Base, said the military had almost eliminated completely insurgency and other security issues threatening the country. He urged men of Operation Hadin Kai, the military operation against insurgency in the North-east, to remain steadfast as they went into the final phase of the campaign against terrorism and other criminalities.

He urged them to stay focused “to achieve our strategic end-state, which is the defeat of all adversaries and restoration of an economically viable North-east geo-political zone and other parts of the country, where Nigerians are free to go about their activities without fear or harassment.”

The president told the soldiers that the whole country remained grateful to them for their gallantry in ensuring the gradual return of peace to the North-east. He condoled with families that had lost loved ones, as well as the wounded.

Buhari assured the families of soldiers, who paid the supreme price for the country, and the injured that the federal government would cater for their needs, in recognition of their sacrifices for all Nigerians.
He asserted before the troops, “I am delighted to be with you today and to convey my gratitude and that of the entire nation to you all, as you continuously strive to secure our dear country. Your career is like no other, because it is a conscious commitment and preparedness to give your best for the sake of others. I am, therefore, here on behalf of a grateful nation to thank and commend you for your service and sacrifices.

“Let me start by commiserating with you all on the unfortunate loss of Brigadier General Dzarma Zirkushu, and other personnel of 25 and 28 Task Force Brigades, who died on 13 November 2021. I do this mindful of the fact that we have lost others in this Theatre of Operation as well as other operational areas across the country.

“We pray for the repose of their souls and for the Almighty God to comfort the families that they left behind. The people of Borno State and, indeed, the entire country owe a debt of gratitude to our serving men in uniform for the huge sacrifices in the pursuit of peace.”
The president commended the troops for their extraordinary resilience and steadfastness in the face of adversity.

He said, “That is the spirit, tenacity and resolve that the Nigerian Armed Forces are known for. Well done. Our country, just like all the others in the Sahel region, is faced with several security challenges that are largely characterised by the violent activities of non-state actors. This has necessitated several interventions aimed at ensuring the security of persons and property across the numerous hot spots.

“Further improvements in the security situation in Operation Hadin Kai have led to a corresponding rise in the confidence of our people, who are now returning in significant numbers to their homes. Further to the reorganisations in the military leadership, concerted efforts are being made to improve your equipment holding. I am aware that you have started receiving some of the platforms procured by our administration while others would be received in the weeks ahead.”

While speaking on the threat posed by criminals through the employment of Improvised Explosive Devices, the president said substantial resources had been directed to procuring equipment for explosive ordnance disposal. He said similar attention was being given to intelligence, surveillance, target acquisition and reconnaissance assets.

“These measures and the platforms being received would accord you the necessary reach, fire power and protection to project force across the theatre and bring the fight to a logical and successful end,” he said.
Buhari told the troops that at the onset of his administration, he emphasised the need to rejuvenate the Multinational Joint Task Force. This was in realisation of the fluid and transnational nature of current threats and their propensity to hibernate in neighbouring countries.

“I, therefore, urge you to continue to further strengthen your cooperation with the militaries of the other countries under the auspices of the Multinational Joint Task Force in order to further optimise the mutual gains for our respective national security,” Buhari told the troops.

He added, “As we step up the military efforts, our administration has remained conscious of the efficacy of the employments of other lines of effort in our drive to ensuring the return of lasting peace to the North-east region.

“The North East Development Commission continues to make giant strides at improving the economic and social welfare of Nigerians in the region. I am also happy with the increased level of cooperation between the good people of Borno State, other stakeholders and the security agencies. I urge you to continue to cooperate with other security agencies with a view to ensuring a full return to normalcy.”

He assured the people that the administration would continue to work with all well-meaning stakeholders, including friendly nations and civil society organisations, to bring peace to all troubled areas across the nation.

While appreciating the government of Borno State for its continuous cooperation with the federal government in multiple spheres, the president added, “This has been critical to the furtherance of our mutual efforts at restoring peace to the state.

“I particularly commend Your Excellency, Governor Babagana Umara Zulum, for your untiring commitment and cherished collaboration with my administration for the overall good of the people of Borno. Yours is a good example of the inherent benefits that are accruable from conscious positive interaction between the federal government and states.”

Buhari also commended the Minister of Defence as well as the Chief of Defence staff, service chiefs and the heads of all other security agencies for forging a common front of collaboration and cooperation, which continues to enhance operations.

He stated, “It was gratifying to observe some of these examples of collaboration during the research and development exhibition at the recently concluded Chief of Army Staff’s annual conference and the launch of locally constructed seaward defence ship at the Naval Dockyard.

“I urge you all to stay the course towards ensuring that we become self-sufficient in the production of our defence equipment in no distant future.

“To my dear troops, as your Commander-in-Chief, I am mindful of your selfless sacrifices, which in some cases have entailed paying the supreme price. The nation owes you a debt of gratitude for your commitment, dedication and unalloyed loyalty to the Constitution of the Federal Government of Nigeria.

“Our government will continue to work with your respective heads to ensure that your welfare receives priority attention and that our wounded comrades are given the best medical care possible.”
Buhari also said the manpower challenges, which had limited the rotation of some units from the theatre, would be addressed by concerted efforts to increase recruitment and ensure that the remaining units due for rotation were relieved as soon as practicable.

In a related development, Buhari assured that hard times awaited terrorists troubling the North-west, with the procurement of high-tech equipment and hardware by the military.
He also said he would continue to do his best for the development of the country until May 2023, when he would statutorily leave the presidency.

The president spoke on Thursday in Maiduguri after the inauguration of Oriental Energies Resource Ltd Hanger, Muhammadu Indimi Distance Learning Centre, and an International Conference Centre donated to the University of Maiduguri by business mogul, Alhaji Muhammadu Indimi, he expressed concern at the level of insecurity in the North West zone.

He said it was sad that the people of the North-west, who prior to now lived together, sharing same culture and outlook for a long time, would start stealing, kidnapping and killing one another.

Buhari said Nigerians should appraise the performance of the administration based on what the situation was on security, economy and corruption before he came in, and where it is now.
“We have a great country, and we thank God for giving us so much resources. But we need to develop our resources.”

The president noted that development would be more sustainable by empowering the people.
He said, “I am highly impressed with what I have seen at this state of the art Centre for Distance Learning and Auditorium sited here, the University of Maiduguri. I am told that this international conference hall has 1,300 seats. The high quality standard of this edifice is major contribution by Alhaji Muhammadu Indimi. This intervention will benefit not only students from Borno and the North-east but also students from all parts of Nigeria.

“For the Oriental Energy Resources Hangar, which I commissioned, it will welcome and offer support services to aircraft and pilots involved with Humanitarian Air Services.”

Buhari also commended Governor Babagana Zulum of Borno state for the work he had done in two years, and said he was in the state in June to commission development projects.

In his remarks, Zulum appreciated the president for honouring the state, adding that Indimi’s contributions to the development of the state showed he loved his people.

“Words cannot convey our gratitude for the statesmanship, “ the governor said.
Zulum said the state had recognised the contributions of Indimi by renaming the Damboa Road after him, now Alhajji Muhammadu Indimi Road.

Speaking also, Indimi said he was motivated to build the Distance Learning Centre and the International Conference Centre to encourage education in the state.
He said, “I believe the centre will help in delivering training and skills as well as encourage those who will be taking lessons from remote places.”

Assessing the Performance of Aviation Industry in 2021

Groaning Under the Burden of Loan Approved by N’Assembly

How Ganduje Became an Outsider in Kano APC