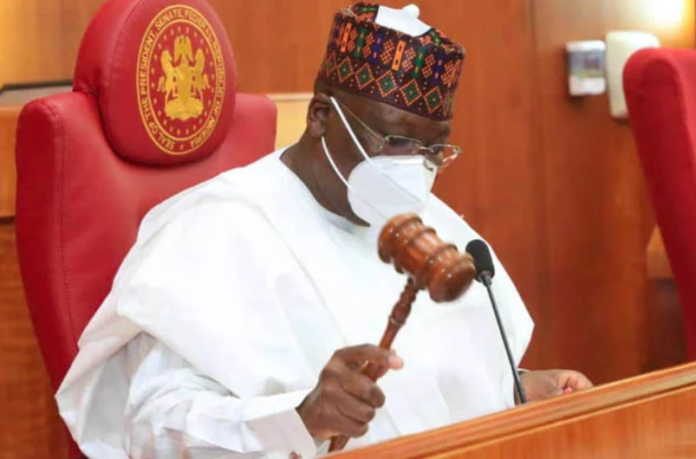 Twenty four hours after the House of Representatives okayed the 2022 Appropriation Bill, the Senate also followed suit as it passed an aggregate expenditure of N17.126 trillion as budget for next fiscal year.

The Red Chamber also approved the N276.8 billion request of President Muhammadu Buhari for funding of expenditure in the 2021 budget before adjourning plenary to January 18, 2022.

This is just as President of the Senate, Dr. Ahmad Lawan also disclosed that the National Assembly would today transmit the 2022 budget passed by both chambers to President Muhammadu Buhari for assent.

Lawan also canvassed for the Senate to stabilise the nation’s polity ahead of the 2023 general elections as the Red Chamber prepares to consider the report of the committee on the review of the 1999 constitution upon resumption of plenary in January, 2022.

The passage of the budget during plenary was sequel to the consideration of a report by the Appropriations Committee on the 2022 Appropriations Bill.

Presenting the report, Chairman of the Committee, Senator Barau Jibrin, said the revenue projection for the 2022 budget was predicated on the Medium Term Expenditure Framework/Fiscal Strategy Paper approved by the National Assembly.

Barau recalled that the National Assembly had approved 1.88mbpd daily oil production and $62 as against the $57 proposed by the executive arm of government.

He explained that the increase in oil price benchmark was done to reflect the current market value in the international market.

The ranking Senator added that the exchange rate was pegged at N410.15/$1, Gross Domestic Product (GDP) projection at 4.2 per cent and inflation rate estimated at 13 percent.

The Committee in its recommendations stated that additional revenues discovered should be provided to the Works and Housing Ministry for funding of critical projects, Independent National Electoral Commission (INEC), for the 2023 General Elections, Defence and the National Population Commission for the 2022 Population Census.

It also added that the N98 billion increase in deficit should be approved to take care of some of the additional requests from the executive arm of government.

Also yesterday, the Senate approved President Muhammadu Buhari’s request for the virement of N276,757,232,395 billion to fund expenditures in the 2021 budget.

The approval followed the consideration of a motion sponsored by the Senate Leader, Yahaya Abdullahi.

He noted also that pursuant to Section 3 of the Appropriation Act 2021, amounts appropriated under the Act could be vired only with the approval the National Assembly.

“Aware that the details of the expenditures proposed for the virement are contained in Schedule 1 hereto attached, while Schedule 2 shows the source of the funds to be vired for the items in Schedule 1; and

“Further aware that the 2021 Budget Implementation is faced with challenges that will require additional funding for some critical and urgent Line Items in the Budget,” he explained.

Buhari in his virement request contained in a letter dated December 16, 2021, said the sum of N276,757,232,395 would be sourced from the N365 billion Service Wide Vote for Upscaling of National Social Investment Programme (NSIP).

A breakdown of the virement request detailed by the Federal Ministry of Finance, Budget and National Planning showed that N199, 129,053,400 was for payment of local contractors’ debts, public service wage adjustment for MDAs, OSSAP SDGs Projects 3 and Group Life Assurance for all MDAs.

In addition, N4, 500,821,569 is for the Federal Ministry of Education; N2,335,167,265 for the Nigeria Airforce; N4,617,811,857 for the Ministry of Defence; N25 billion for the National Assembly in settling minimum wage areas of National Assembly Staff and Intervention to settle outstanding liabilities owed local contractors.

The Senate at the end of yesterday’s plenary adjourned sitting for the Christmas break till Tuesday, January 18, 2022.

Meanwhile, Lawan, who yesterday disclosed plan by the lawmakers to transmit the appropriation bill to the president today, in his remarks shortly before the chamber proceeded on recess emphasised that the timely assent of the 2022 Appropriation bill would ensure the commencement of its implementation by January next year.

According to him, businesses operating in the country as well as the economy would to be impacted positively by the timely passage of the nation’s budget by the National Assembly.

He said, “For the 2022 Appropriation bill, we are expecting that the bill will be cleaned up between today and tomorrow, and we hope that by tomorrow (Thursday), the bill will be sent to Mr. President for his assent.

“And we are very optimistic that Mr. President will assent to the bill, like he did for 2020 and 2021, so that by January 2022, the implementation of the budget 2022 will commence by the grace of God.

“We have seen the benefits of passing and assenting to the budget in good time, especially when we had to fight COVID-19.

“The consequence of the implementation of the budget in 2021 and 2020 was very clear. For us to come out of the recession that we found ourselves in the previous period, we must have had the fortune of passing the budget and getting Mr. President to sign in time.

“So, we believe that the economy of Nigeria, and Nigerian businesses especially, will continue to benefit from the passage of the appropriation bills in time and the assent by Mr. President, accordingly.

“We wish to make it clear that our desire is to provide legislations for the peace, order and good government of our country.”

Lawan further stated that the Red Chamber would consider the report of the Committee on the Review of the 1999 Constitution as soon as it is presented early next year.

“When we return, we have one major that has not been attended to at all as a chamber, and that is the constitutional amendments.

“Our Committee on the Review of the 1999 Constitution has been doing its work. But as a chamber, we haven’t finished working on it.

“We are expectant that our Committee on the review of the constitution will be presenting the report to this chamber as soon as we resume. The committee has done so much, and the report is almost ready.

“When we harmonise with our colleagues in the House, we should be able to vote on the issues that will particularly bring about peace, unity and good government in our country, before such bill will be sent to the State Houses of Assembly for concurrence,” the Senate President said.

“On the whole, we must thank Almighty God that almost all those major items we reflected in our legislative agenda as a chamber has been attended to.

“There’s nothing that has been left out, including the review or amendment to our standing orders on how our committees have better and more clearly defined jurisdictions and, of course, how we conduct ourselves here as a chamber.

“And this is because we’ve remained united even in the face of sometimes very difficult issues. We have gone through such difficult moments with dignity and respect for each other, and we have come out even stronger,” he added.

He reminded his colleagues of the role of the Senate as an institution to stabilise the polity, particularly against the backdrop of issues likely to surface ahead of the 2023 general elections.

“Next year, by the grace of God, will be the last lap of our tenure. So, we have a lot to ensure that we finish all the things that we have penciled down for ourselves and, of course, there are many other issues that from time to time will be coming up in our polity.

“This Senate is supposed to play that role of stabilising the polity in Nigeria.

“And I daresay, that the members of the National Assembly, particularly the Senate, is a stabilising institution in the polity of Nigeria.”

Lawan underscored the need for the National Assembly to work with the executive arm of government to provide the needed resources, as well as oversight the use of such funds in the fight against insecurity.

“The killings across the country are so bad, and it is not acceptable to us, but we have to work hard because we are part of government and we are also accountable to the people, for not only protecting their lives and property, but to ensure that they have a life that is worth living.”