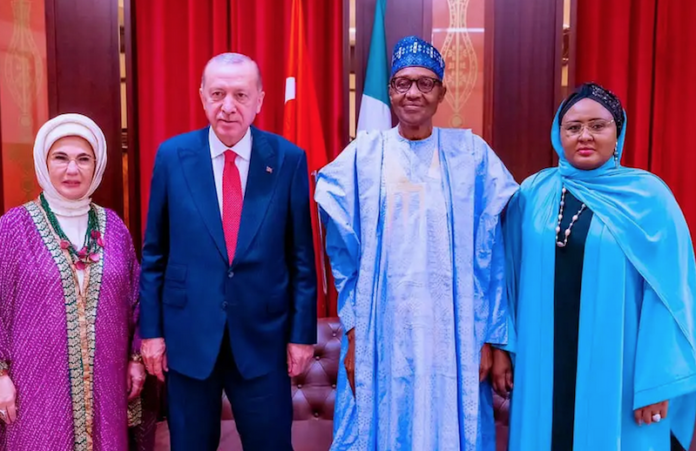 President Recep Tayyip Erdogan of Turkey yesterday promised to assist Nigeria tackle the numerous security challenges it is facing, saying he “understands the difficulties and solutions.”
On the same day, President Muhammadu Buhari got a surprise 79th birthday cake in Istanbul, where he became sentimental and expressed eagerness for the end of his tenure in 2023, so as to return to his farm.

Erdogan, who spoke at a bilateral meeting with Buhari, shortly before the official commencement of the 3rd Turkey-Africa Partnership Summit in Istanbul, said his country “understands the challenges facing Nigeria and its needs, and we are ready to assist you to meet those needs, especially in the area of defence.”

Turkey, which has a growing recognition in the world as a military power and had successes to show in Iraq, Syria, Libya and lately Azerbaijan said it welcomed the Nigerian government’s decision to buy naval ships from their shipyard, noting that discussions were ongoing on how to strengthen the capacity of the Defence Industries Corporation (DICON) in Kaduna in line with an agreement signed during President Erdogan’s last State Visit to Nigeria.

“I am happy Nigeria is stepping up cooperation with other nations in areas of defence and health, and we are ready to cooperate with you on these areas and more,” said Erdogan.
President Buhari had earlier said Nigeria would partner with the Republic of Turkey in dealing with the current security challenges facing the nation.

Senior Special Assistant to the President on Media and Publicity, Garba Shehu, in a statement titled, “Nigeria, Turkey to Strengthen Security, Defence Ties,” quoted the President as saying, “Turkey has practical experience dealing with challenges over the years and Nigeria stands to gain from that.”

Giving assurances that the relationship between the two states would continue to grow for the mutual benefits of both countries, Buhari said he was pleased with the Turkish offer of support in the area of security and peace in Nigeria.

“I wish to express my appreciation for the special invitation for this meeting and to express my happiness with your offer of assistance in dealing with the challenges facing us.
“I await the reports of officials and the ministers as they hold meetings with their counterparts. I assure you that I will endorse all their positive recommendations,” he assured Erdogan.

President Buhari, at a surprise 79th birthday reception organised for him in Istanbul yesterday promised to advance the interest of Nigerians and that of the nation as he prepares to leave office in May, 2023.

The President also used the forum to disclose that he was itching to return to his farm in Daura, Katsina State to tend his crops and livestock.

As he stepped out of his suite, moving to the meeting room, President Buhari met a surprise lineup of the Nigerian delegation with a cake decorated in Nigeria’s national colours.

The group broke into a chorus, as they began chanting “Happy Birthday, Mr. President.”
The Minister of Foreign Affairs, Geoffrey Onyeama, who spoke on behalf of the delegation, and the Ambassador of Nigeria to Turkey, Ismail Yusuf Abba, congratulated the President on the good work “he is doing for the country”, and wished him a happy birthday, many healthy years ahead and the energy to give his best to the nation.
Onyeama noted, in particular, that the President “continues to have a good run with his health, getting better and more active with time.”

Responding to the tribute, Buhari said he would put-in his best for Nigeria until the last day when, in 2023 he hands over to a successor and returns to his farm to tend crops and livestock.

According to him: “I thought that being away from Abuja I will escape these things. The Guards Brigade had written to tell me what they wanted to do on this day. Now here you are doing this far away from home.

“I look forward to the year 2023 when I finish, to go home to take charge of my farm. Between now and that time, I will do the best that is possible to advance the interest of the nation and its people, and carry out my duties as prescribed by the Constitution.”
The President later cut a birthday cake moulded in the national colours of green-white-green and went straight to chair a planning meeting with officials in his delegation. Thereafter, he drove to the Dolmabahce Palace for the meeting with Erdogan.

NLC to FG: We will Confront Fuel Subsidy Removal with Protests

Atiku should be tired, he’s been eyeing presidency for 29 years –Afegbua, ex-campaign spokesman