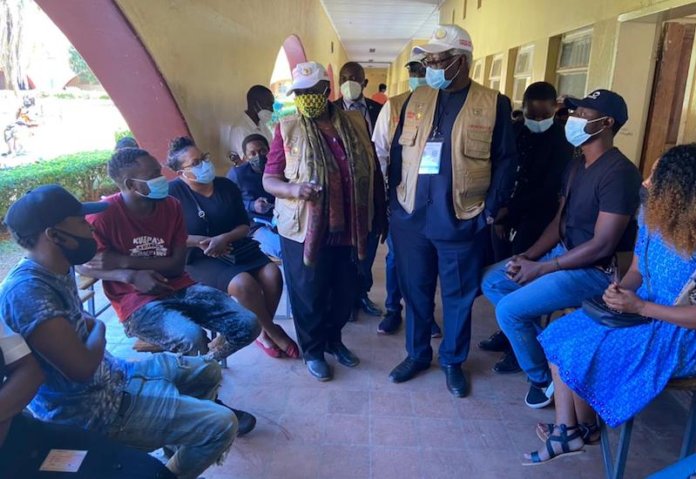 Former president Olusegun Obasanjo and the former vice-president of Uganda, Specioza Wandira-Kazibwe, have condemned the travel ban on African countries over concerns relating to the Omicron variant of COVID-19.

A number of countries in Europe banned travel from countries in Africa following the discovery of the variant by South African scientists.

Obasanjo is a member of the Global Commission on Drug Policy, while Wandira-Kazibwe, the immediate past chair of the African Union Panel of the Wise, was the first female in Africa to become vice-president of a sovereign nation.

Speaking on the development regarding Omicron, the duo, in a joint article published yesterday in The Africa Report, expressed concern over the actions taken to shut out certain countries.
“What message was being sent? That each country by unilaterally bolting its gates will be able to hold back the tide of a pandemic, alone? That contributing to our global understanding of the evolution of a world plague, by sharing the fruits of years of genomic capabilities development, should lead to a country being ostracised?” they asked.

They also wondered how countries gather annually in New York to address injustice “and yet refuse to align on how to make quicker progress on a host of issues, from labour rights to agricultural subsidies and healthcare related patents.”

According to them, rather than issue travel bans, what the world needs “in these Omicron times is smart multilateralism.

“Even after we had learnt that shutting the doors made no sense at this point, the emotive comfort of locking out the other proved too tempting to resist,” they said.

The two leaders continued: “Yet, to run effective contact tracing in a time of rapid global physical connectivity, information and goodwill is required from countries far and near to plot the trajectory of a virus moving at the speed of flight. Detecting a variant in a person who happens to be from or at point A on the globe says nothing about all the other places the variant may have touched before eventually slipping into the cells of the unfortunate carrier.

“A very different form of global hyper-cooperation is required to match the pace of such a fast spreading virus. We in Africa have learnt the hard way that we are in an age where the old models of multilateralism have run their full course.

“Marked by slow bureaucracy and symbolisms of comity rather than pragmatic trust and modern instruments, this old multilateralism has frozen attempts to reform global trade to serve the people rather than corporations.

“It has hobbled efforts to turn the energy transition into a moment to balance the obscene imbalances in population and consumption. And it has led to a world where annually we assemble in New York to address injustice and yet refuse to align on how to make quicker progress on a host of issues, from labour rights to agricultural subsidies and healthcare-related patents.

“Africa’s embrace of smart multilateralism is manifest in being the first continent to agree on a common digital platform for bio-surveillance and biosecurity. Absolutely convinced that the each-for-herself idea embodied in border closures has serious limits, we set out to work with the private and civil society sectors to create both institutional and technological innovations to keep the borders open but the virus out.

“Through a combination of skillful compromises and modern technologies, we pressed on and ensured that the timeline for start of trading would be maintained. It was as clear as noonday to those of us championing African multilateralism that retreating behind the walls of nationalist survival would be continental suicide. It would also be generational suicide because COVID and AfCFTA are both once in a lifetime opportunities.