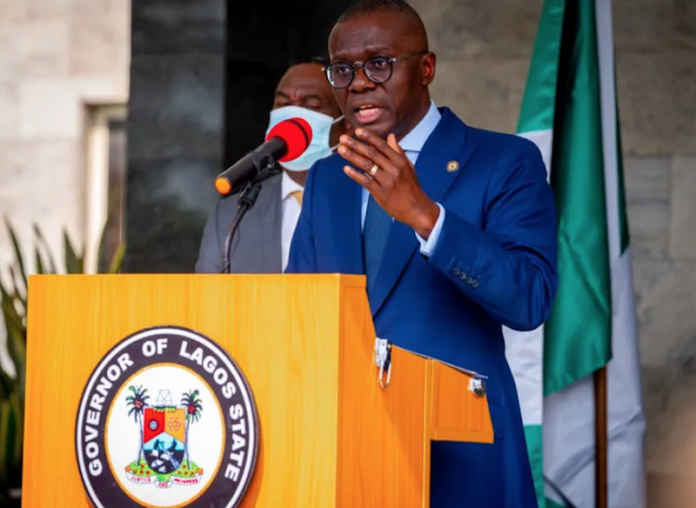 Students of the Lagos State University (LASU) yesterday expressed their readiness to participate in the ‘Lagos Peace Walk,’ proposed by Governor Babajide Sanwo-Olu to herald the healing of Lagos in the aftermath of last year’s EndSARS protests in the state.

This is just as a rights activist and member of the Lagos State Judicial Panel of Inquiry over alleged police brutality, especially, the October 20, 2020 incident at the Lekki toll plaza, Mr. Segun Awosanya yesterday said he would join Sanwo-Olu in the proposed peace walk.
LASU students who came out in large numbers to welcome the governor said they have all resolved to participate in the ‘Walk for Peace’ with the governor for peace and prosperity of the state.

The students made their resolve on the matter known through their Student Union Government (SUG) President, Mr. Oladipupo Uthman Badmus, during the sitting of the Students Representatives Council, the legislative arms of the SUG.
The sitting was the first council session to be held at the newly built students’ Arcade in the school, which was inaugurated by Sanwo-Olu yesterday.

Speaking during the sitting, which was witnessed by Sanwo-Olu; the Vice Chancellor of LASU, Prof. Ibiyemi Tunji-Bello; Special Adviser to the Governor on Education, Mr. Tokunbo Wahab, and members of the institution’s Governing Board, among others, Badmus and Speaker of the Students Representatives Council, Mustapha Adejuwon, who led students to welcome Sanwo-Olu, who is the Visitor to the institution, described him as a youth-centric governor.

They commended the governor’s giant strides in Lagos State, especially in the education sector.
“Mr. Governor, sir, it is what you signed up for but we are indebted to you. Be rest assured, whenever you walk, we will walk with you. We will be by your side. Whenever you run, we will run with you to the end,” Badmus assured on behalf of LASU students.

Sanwo-Olu who had the first session with the Students Representatives Council, charged the students to join hands with the state government and LASU management for the institution to make it competitive among notable universities in the world.
Sanwo-Olu during the sitting announced a donation of two brand new big buses to the SUG to ease movement around the campus as well as other gadgets and equipment for students’ use.

He said: “I want to tell you that we are in this journey together and together, we will build the biggest university in the whole of Africa and it will compete with the greatest universities in the entire world.
“I feel highly honoured that all of you have turned out in large numbers to come and see the possibilities of what we can do collectively.

“This arcade will provide the right atmosphere for the leadership of the Student Union of LASU and opportunity for students’ management better relationship. It would provide an opportunity to engage with the wonderful youths in LASU, because this is also a building to develop the future leaders that are leaders here today.”

On his part, Awosanya who is currently in London, said he would join Governor Sanwo-Olu for the Peace Walk if he is Nigeria at the time of the exercise, saying he is more concerned about a peaceful society.

“Because I am an advocate for peace, justice, equity and fairness, I will walk with anybody who wants peace,” Awosanya, popularly known as Segalink said during an interview on Channels Television.
Awosanya said the Sanwo-Olu-led administration was doing everything possible to ensure peace in Lagos, adding that the government should be encouraged for a peaceful society.

He said the decision of Lagos State Government based on its White Paper to accept 11 recommendations, reject one, accepted six with modifications and forwarded 14 to the Federal Government for consideration out of the 32 recommendations made by the Judicial Panel of Inquiry, was a good development that should be encouraged.

Awosanya said, “injustice is what we should insist must be corrected” and going by the White Paper released by the Lagos State Government, some of the issues raised in the report of the Judicial Panel of Inquiry have been addressed.
He said the decision of the Lagos State Government to forward to the federal government, the recommendation of the Judicial Panel of Inquiry that October 20 should be made a national day was commendable.

Awosanya, who started the #EndSARS online, also advised that those dissatisfied with the Lagos State Government’s White Paper should approach the court to express their grievances against the government decision.

Also speaking during the programme, a Constitutional lawyer, Mr. Wahab Shittu, said the White Paper released by Lagos State Government was commendable because it showed the state government only rejected only one out of the 32 recommendations made by the Judicial Panel of Inquiry.
He said the claim by the White Paper in respect to the deceased at the tollgate as against the the report of the Judicial Panel of Inquiry is in order because evidence can only be based on facts.