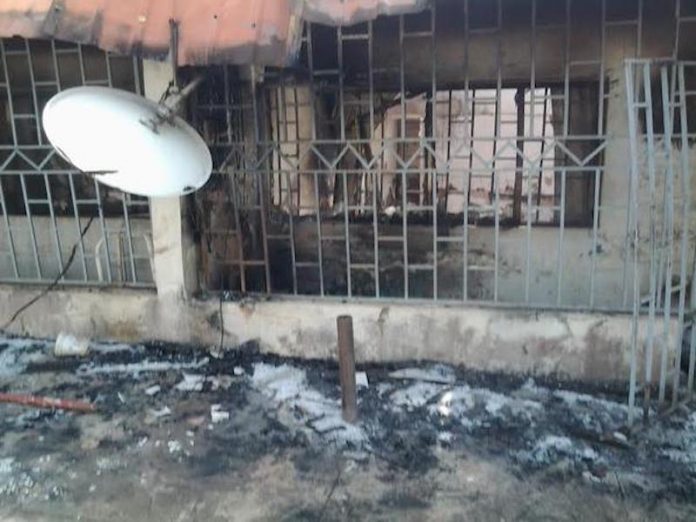 No fewer than 11 persons, including children, were killed yesterday and 30 houses burnt when terrorists attacked Te’egbe community in Bassa Local Government Area of Plateau State.
In a swift reaction, Governor Simon Lalong expressed anger over the attack, describing it as “another sad incident” aimed at destabilising the state.

On the same day, it emerged that the abductors of 66 members of Baptist Church, Kakau Daji, Chikun Local Government Area of Kaduna State, finally contacted families of the victims after 27 days, with a demand for N99 million ransom.

THISDAY gathered that the assailants raided Te’egbe village in the early hours of yesterday while the villagers were still asleep, killing 11 persons and injuring several others, and also setting ablaze several houses.
Spokesman for the Miango Youth Development Association, Mr. Nuhu Bitrus, while confirming the attack said, “Last night was very horrible for the Irigwe nation as Fulani militia attacked Te’egbe village, killed so many persons and injured many others. They also set their houses on fire.

“Right now, we have just counted the bodies of 10 persons who were shot dead by the attackers. They are being taken to the mortuary. Our people are still searching for more victims. We will let you know when we are done with the search and rescue operation.”

Also lamenting, the Secretary of Irigwe Development Association (IDA), Mr. Danjuma Auta said, “Just last week, we read on social media the threat chats sent by Fulani herders to the military stationed at Ancha, a neighbouring community, asking them to allow free grazing in and around all communities in Irigwe land or be made to face their wrath.

“Although the military dismissed the threat, Fulani have carried out their plans as they attacked Ancha village on Tuesday, 23th November, 2021 and killed two persons.
“Again, these same Fulani herders attacked the village of Ta’agbe and, as of now, we have already confirmed the death of 11 people, while the search is still ongoing. We are worried because times without number, we have met at different fora with the Fulani community that we know and have promised to embrace peace, but with the renewed attacks on our innocent citizens we wonder if the peace accord entered is anything to hold to.

“If those who’re saddled with the constitutional responsibility of protecting us feel overwhelmed and can no longer guarantee our safety, they should come out publicly and tell Nigerians. Our people are beginning to lose confidence in any security agent since their presence could not stop, arrest, or neutralise the attackers.”

Meanwhile, Lalong said the attack yesterday remained condemnable and unacceptable to the government.
In a statement by his Director of Press and Public Affairs, Macham Makut, the governor described the attack as “another sad incident which is clearly the handiwork of criminals that are bent on instilling fear, pain and sorrow among the people with a view to destabilising the state and making fortune from their criminality, as well as rupturing the substantial peace attained.”

The statement partly read, “The Governor totally condemns the attack and says there is no explanation that can justify it. He therefore directs security agencies to take immediate and drastic steps to apprehend the perpetrators and ensure that they pay for their crimes.

It further quoted the Governor as saying “The persistent attacks in this general area remain condemnable and unacceptable to Government. As such, no resources and efforts will be spared in painstakingly following up on the trail of those who derive joy in attacking and killing innocent citizens and destroying their homes and means of livelihoods.

“I expect the security agencies to deploy everything at their disposal to arrest those who carried out the crime no matter how long it takes. Government will not take any excuse for failure to achieve this directive.”

Lalong while commiserating with the victims and families of those killed, assured that they would get justice as Government will stop at nothing to unravel those behind this ugly incidences that continue to disrupt the livelihoods of the people of the local government.

Lalong also directed the Plateau State Emergency Management Agency and the Peace Building Agency to immediately visit the area and assess the level of damage with a view to carrying out immediate intervention and bringing succour to people who are in need as a result of the barbaric attack.
He also called on the people to assist the security agencies with relevant information that would enable them crack the identity of the attackers and know their motives.

The Plateau State Police Command has confirmed the attack at Te’egbe Community.
In a statement issued by its Spokesman, Ubah Ogaba, the Police Command said, “On 26/11/2021 at about 0130hrs, the Command received a report of an attack by yet to be identified gunmen at Te’egbe Village of Bassa LGA of the state.

“Upon receipt of the report, the Commissioner of Police, Plateau State Command, Bartholomew Onyeka, immediately drafted a tactical team of the Command to the scene to avert further attack.
“The Commissioner of Police further led other Senior Officers of the Command to the scene for an on-the-spot assessment and to console the victims of the attack.

“The CP has directed that discreet investigation be carried out and assured the community of his readiness to fish out the perpetrators of this barbaric act.”

Meanwhile, indigenous natives of the attacked community, the Irigwe ethnic nationality, have expressed disappointment with the security agents who they accused of failing to protect the people despite having prior knowledge of the attack.

The statement further pleaded with the President Muhammadu Buhari to come to their rescue before it is too late, adding that security operatives “must be made to quickly investigate Fulani settlements fingered to be hosting and training these attackers.”

The Vice Chairman of the Christian Association of Nigeria (CAN) in the 19 Northern States and Abuja, Rev. John Hayab, disclosed this yesterday in an interview with journalists in Kaduna.
This is the first time the abductors will be making contact with the families of victims, 27 days after the abduction.

The worshipers were abducted on October 31, 2021, when the terrorists invaded the church during Sunday service.
The terrorists were said to have taken five of the victims close to the community and shot three dead while two others had gunshots wounds and were taken to the hospital.

Hayab also said one of the remaining four students of Bethel Baptist High School, Damishi, Kaduna, who were abducted on July 5, 2021, had been released, while three were still being held by the bandits.
He said N5 million was paid to the terrorists for the release of the student. The bandits had on July 5, invaded the school and abducted 121 students. A total of 117 of the students were later released while others escaped.

Sources said over N200 million was paid to the bandits for the freedom of the students who were released in four batches. Ransom was said to have been paid for each batch.

Group Restates Call on Buhari to Swear in NDDC Board