Bode George: Respect the Zoning Formula in the Interest of Peace 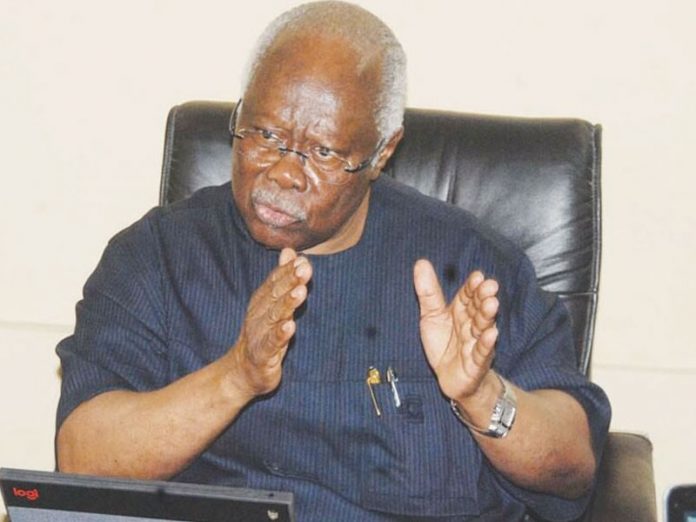 Let’s start with the congress in Lagos that didn’t take place. What happened?

First, it is internal dynamics. They raised the stake so high that even some of those people who call themselves old members, they came, they joined the normal discussion, and the way I was brought up and the way I know civilized human beings behave, when you are at a meeting, if you have any objection, you raise it there or forever keep quiet. The consensus is also part of our party culture. All the contestants appeared before the apex, from chairman to secretary in the state. I have the record, if you don’t agree, say it there. The beauty of democracy is you listen to the best debates, robust discussions with biases. I think they went from here and got another group and aligned to those people.

What is your view on the convention?

You know the convention is a carnival, it is a celebration for the party. In most of the positions now being allocated and zoned, many people have won automatic turns because there are no competitors. In the few areas that there is friction, we are asking them please calm down. I did the same when I contested for the chairman, I know how much money I spent. We went all over this country; it was like a presidential campaign. And you saw my campaign headquarters in Abuja. But a day before I saw the shenanigans going on. If you love this party, you don’t want a crisis. I knew what my colleagues were telling me in the north, but I said no, for me it is not a matter of life and death. I am a general, if you cross the red line, whatever point you find yourself, that is your headache. You must be bold enough to say time out.

What do you think the party should focus on ahead of 2023?

I have said one thing before, the founding fathers laid out a system, and I will struggle as part of my last contribution to this party before I head out. The oral history should be now written. The culture of the party, the zoning system must now be there in writing. Not everybody translating it to soothe their purpose. Those who sat and said they zoned chairman to the north and said presidency can now come from anywhere, how? Why are you thinking you are half smart? It is our future you are toying around with. Call a spade a spade when you are inside that house discussing your party, no half measures. The way the founding fathers set it out to avoid the crisis we had in the 60s, where the majority will always have their way, minorities will only be seen and be told to shut up. That led to the crisis of the first coupe, both north and south. But now when they now congregated led by Dr Alex Ekweme, he brought this idea, it is not new in the world. That is what happens in Switzerland, where you have the Germans, French and the Italians, they also rotate. Now they came up and said okay, they should divide Nigeria into six geo-political zones, this is coming from our founding fathers. That is not in our constitution and our own it is just in our head; it is not written in black and white so that there will be no misinterpretation. Six geo-political zones, six top positions in the land, president, vice president, senate president, speaker, secretary to the government, national chairman of the party. Every zone will go home with one of these. So that sense of belonging will be enhanced. Now after every 8 years, the three at the top will come to the south, the three at the bottom will go to the north. There can be no reason, no corruption, that the national chairman and the presidency will come from the same zone or side. If the presidency goes up, the Vice President goes down. The Senate presidency goes up, the speaker comes down. The secretary to the government goes up, the national chairman comes south. So how can that be? So, you see, rather than face the problem and resolve it now they are kicking the can down the road. If you say everybody can contest the presidency, what are you trying to do? Throwing the whole party under the bus? Now they said okay if it now comes from the north, then they will now suddenly say okay, you people produce chairman.

Recently the Afenifere went to Bourdillon even though Chief Ayo Adebanjo has always been anti-Tinubu, what do you give as a reason for the sudden summersault?

It is a Yoruba tradition, and it is an Africa tradition, they say it in my local parlance “This guy went for a serious operation and God saved him and he returned home, as elders, they are not enemies. We may disagree but we must not be disagreeable. Like I keep saying it is not a matter of life and death. The Greeks, who brought about democracy, expect people with robust debate, discussions, with facts and figures to convince the others that what you are proposing is better than the one this man is proposing. The fact that they went to greet him, did not mean that they hated him or that they are trying to give him the succour to go and become the president. That is a different ball game. In African parlance, they say this man is very sick, he is your greatest enemy, and you will say is it true? So, they did not go there to go and discuss politics. They did not go there to say we support you or not. But others are saying they must have gone there to tell him to come out to be president. President of where?

What about you, will you go?

I also went for surgery, and I just came back. We have not been in any room before for any discussion. I know him from outside, if I see him outside, I will wave to him and he will wave to me, but we are not friends. You know Alliance for Democracy was one indivisible party before it metamorphosed into Action Congress, became Action Congress of Nigeria and then suddenly they joined up with General Buhari and then became APC. And I have always said it, and I won’t stop saying it, that is a contraption. It is a party full of strange bedfellows. You know they said we don’t believe in zoning but how did they manage the top six positions? Where is the President from? Northwest. Vice President, South West. Senate President, northeast. Speaker, South West. Secretary to government, north. Chairman until recently was Oshiohmole. Remember when that one was playing his pranks, what they have now is an acting chairman. Before it was Oshiohmole, from the south. So they did not believe in zoning. How did they end up? That is a new culture, the new thinking in Nigeria. Because first of all, you must have a system that guarantees, no matter how small you are in this country, that you must have a sense of belonging. If you don’t do it, that ship of state will sink. So we can say we don’t believe in zoning, how we will end up?

There was this saying that in the PDP of the 16 years that the party was in power, the south ruled for 14 years and there were only two years by the north. So, for that reason, it will only be fair that the presidential candidate of the party should be allowed to come from the north. Which is the reason why people like Saraki and Atiku and Tambuwal are in the race even Bala Mohammed. What is your take, Sir?

Let me tell you my mind when you want to do wuru wuru, you start counting 8 from 8. They are talking about 1998, 1999. Was Nigeria created in 1999? Do you want to know how many times group A has been ruling? Go back to that 1960 that we took and collected this certificate of independence. How many times have our people in the north been on the saddle? So, it soothes you to say ha, that was 1999 and that they have ruled for 14 years. So, the military is to be wiped out of our history? The Tafawa Balewa regime is to be wiped out of our history? When we come to equity, let us come with clean hands. Only the truth will liberate us. That is like working wuru wuru to the answer. Let’s be serious. If I was there, I will ask them when we got our independence. So, the whole period of the military should be interregnum, is it to be discountenanced? Is that a fair assessment? The people who ruled did they came from Lagos State?

What about the fact that the Igbos are agitating that it is their turn, and it doesn’t seem that they are going to be given that slot?

Rightly so, because what is good for the goose must be good for the gander. They have a right to demand it. they also have a right to network and convince other Nigerians, that this is justice, fairness and equity. You just don’t demand it, you earn it by your interaction and convincing. That is the beauty of democracy. Now nobody has excluded the southeast to participate in this battle. The approach must be convincing enough. I also sympathise with them and rightly so, we have a right to say yes, it is our turn. But this thing does not just drop on your lap, your network. I have a lot of Igbo friends and I tell them I agree with you when we discuss. But don’t just say, yes, it is our turn. Politically, it is expedient to get that by a network. That will be value-added and I agree with them. Baba ruled during this period, Aguyi Ironsi also ruled but for a short run. so what is good for the goose is also good for the gander. So I agree with them, let’s network. That is why the chairman of the zoning committee of our party said the chairmanship only should go and that is all. Can you separate chairmanship from the presidency? What are we saying? Call a spade a spade, everybody is watching, the whole world is watching us. The kind of voices that are coming as observations on our existence is very, very worrisome.