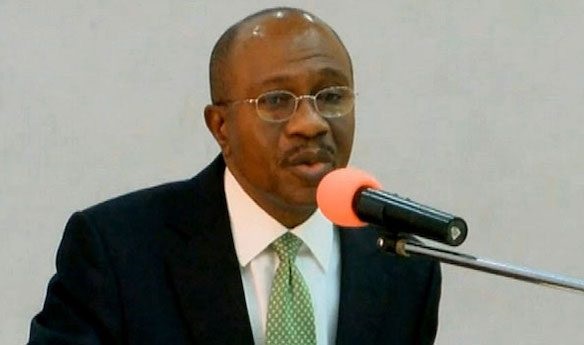 The Governor of the Central Bank of Nigeria (CBN), Mr. Godwin Emefiele, has revealed that the central bank has so far disbursed about N3 trillion to households, small and medium scale enterprises (SMEs), smallholder farmers, pharmaceutical companies as buffer against the impact of the Covid-19 pandemic.

Speaking in an exclusive interview with Arise Television on the sidelines of the recently-concluded Nigerian International Partnership Forum in Paris, France, Emefiele noted that the insinuation that the CBN was overreaching its statutory bounds, was baseless, explaining that the bank had continued to play its monetary management role effectively.

He also reiterated that the monetary and fiscal authorities were working hand in hand to deliver a stronger economy to Nigerians.

Emefiele pointed out that the job of the CBN was to complement the efforts of the fiscal side, emphasising that it had never happened in the country where the central bank would lend funds for a tenure of 10 years with a two-year moratorium, like the CBN had done in recent times.

“And I can tell you this, between 2020 and now, our data shows that we have disbursed at least N2 trillion, almost N3 trillion in loans to households, to MSMEs, to smallholder farmers, to pharmaceuticals and health institutions.

“ We have also given these funds to some of our large agricultural companies that want to get back again to business, to manufacturing companies who are accessing long term 10 years loan with two-year moratorium with single digit rate. I have data that shows we are playing our part,” he said.

On the recently launched “100 for 100 “, he noted that it was floated to support employment creation, assuring that the central bank would do everything possible to provide foreign exchange to import plants and machinery.

He added that the programme would complement the plan by President Muhammadu Buhari to create millions of jobs and make credit available at a cheap rate even for a long tenure.

“In terms of the prerequisites, at least 80 per cent of the employees within these new corporate entities would have to be Nigerian,” Emefiele insisted.

He added, “We know that people would like to play some games but I can assure you that the central bank has the resources to monitor.

“Even our current intervention programmes, whether in agriculture or in manufacturing, those who have accessed those facilities will tell you that at least twice a year, our people go to check and investigate to know whether those projects have been set up and are meeting their objective.”

He maintained that the insinuations that there was no alignment between Nigeria’s fiscal and monetary policies were baseless, stressing that on Covid-19 for instance, the CBN had been working with the finance ministry to reduce the devastating impact.

“If you ask the Finance Minister, we are always in contact and she would tell you that there are no issues about the relationship between the monetary and fiscal authority. So, when people say there is no synergies, again, I wonder where that is coming from.

“And the Minister of Finance and I had opportunities several times to go back to brief the president. So, it is left for you to respond whether there is collaboration between monetary and fiscal authority there.

“After that, the president said we should establish the Economic Sustainability Program (ESP) chaired by the Vice President. The central bank played an active part in the development of that program to the extent that the fiscal authorities were only meant to contribute N500 billion and monetary authorities were left to provide almost about N1.5 trillion,” he added.

He expressed joy that Nigeria now produces and consumes its own rice, stressing that the wheat programme had also taken off with expected yield very encouraging.

He stated that Nigeria would not be a guinea pig for cryptocurrency use, saying the CBN has now launched its own digital currency which is safer and more secure than crypto.

Emefiele stated that with e-naira, some payment products that were costly, will be reduced forcing the banks to review their processes, saying that Nigeria will not make its platforms available for crypto. “Why is it encrypted. It means that there’s level of illegality associated with it,” he stated.

He argued that no country with high level financial standards endorse cryptocurrency, insisting that “we will not allow it to happen.”

Emefiele disclosed that he was always in contact with the minister of finance, budget and economic planning, insisting that there are no issues concerning the relationship between the monetary and fiscal authorities. “So, when people say there is no synergy, again, I wonder where that is coming from,” he said.

The CBN governor added that the current administration would continue to focus on the provision of infrastructure and deliver legacy project.

“By the time we sit back after we have left this job and we see it doing well, we would thank God we had an opportunity to serve our country,” he noted.

According to the CBN helmsman, it was high time Nigeria stopped relying on an economy that depends on oil.

“We must diversify the economy into the non-oil sectors. We must deepen our economy so that we can truly position ourselves as a country that is self-sufficient,” he explained.

Nigeria, other African countries commit to ending polio –WHO