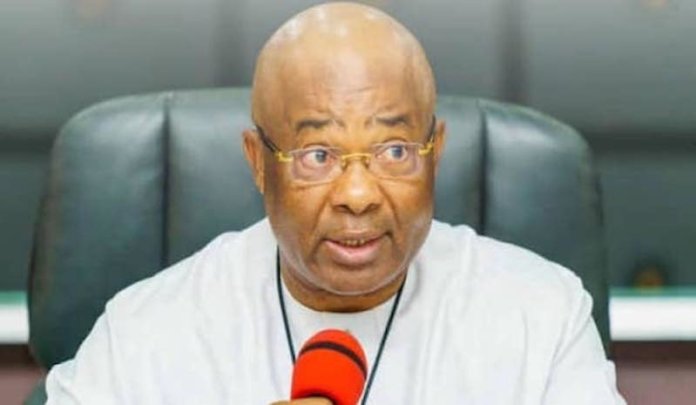 At a recent encounter with the Imo State Commissioner for Information and Strategy, journalists including Vanessa Obioha were inundated with some of the achievements of Governor Hope Uzodimma

For the Commissioner for Information and Strategy in Imo State, Declan Emelumba, the state is experiencing true democracy due to the leadership shrewdness of Governor Hope Uzodinma. Emelumba expressed this sentiment during a meeting with journalists yesterday. According to him, there was no democracy in the state before his principal took office.

“The people did not know what was happening in government. It was ‘familiocracy’, just a clique of a family and cronies running the state. There was no due process. The funds of the state were spent carelessly. Even a private man would not have been that reckless.

“It was so bad but Uzodinma has restored order, due process and sanity. Today, Imo people can say that they’re involved in the running of the government. That is why he has held over four stakeholders meeting within two years, where he consults regularly with the people. This is a statement of stewardship. So the people know exactly what the government is doing and are at the same pace with him.”

He added that Uzodinma is in continuous talks with the local governments and has also introduced the people’s budget where the LGs needs are added to the fiscal budget of the year.

“When you compare the legitimate administration of Rochas Okorocha within eight years, what Uzodinma has done In two years surpasses what Rochas has done in eight years. There was no democracy under Okorocha. He was just doing what he liked.”

These leadership traits of the governor, Emelumba believes, will fetch him a landslide victory if he runs for the governorship in 2023. He dismissed comments by the Peoples Democratic Party (PDP) governorship candidate in the 2019 elections, Emeka Ihedioha, who claimed that Uzodinma will be edged out in the 2023 elections.

“Ihedioha never won and will never win any election,” Emelumba stated emphatically, citing Ihedioha’s defeat in 2015 and 2019 when a Supreme Court ruling upturned the election results that crowned him the winner. As long as Emelumba is concerned, Ihedioha’s dewy victory at the elections was negotiated.

He argued that Ihedioha’s ambition for the Number One seat in the state is curious.

“What he is not telling Imo people is why his eyes are still focused on that seat. The reason is because he wants to continue from where he stopped. In seven months that he occupied the Government House, illegally though, what did he achieve?

“He didn’t do anything more than expanding his estate and spreading the news that he wanted to build the stadium which was one of the ways he used to siphon money. If Ihedioha had spent four years, he would have made Okorocha a saint, because the way he was going, he would have been far worst than Okorocha.”

He maintained that Ihedioha’s only agenda for the state was to expand and consolidate his imperial ambition, and that would have left the state in ruins.

Understanding the Musical Chairs at Imo House of Assembly

Buhari for London on private visit