INEC getting better, says Soludo as he receives certificate of return 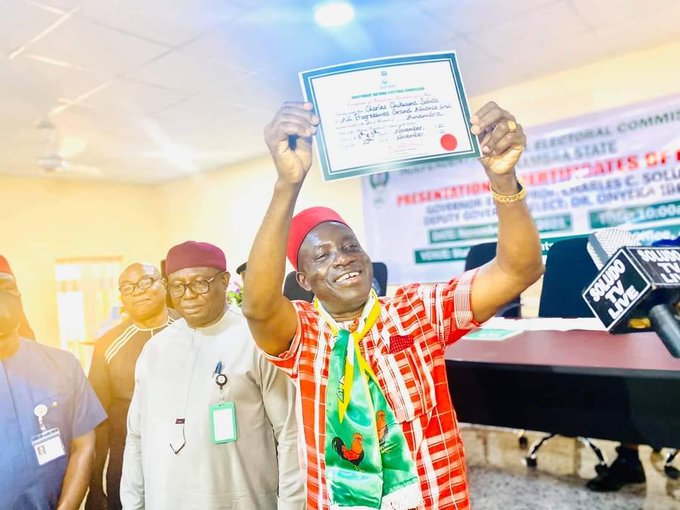 The Anambra State governor-elect, Prof Chukwuma Soludo, and the deputy governor-elect, Dr Onyeka Ibezim, have received their certificates of return from the Independent National Electoral Commission.

INEC National Commissioner Supervising Anambra, Mr Festus Okoye, presented the certificate to the duo on Friday at the state headquarters of the commission in Awka, Anambra State.

Okoye said the ceremony signified that the governor and deputy governor-elect won the November 6 governorship election in Anambra.

He promised that the commission would audit the conduct of the election and utilise the lessons to improve on the next set of elections.

Speaking, Soludo said, “Initially, there were tense moments but this election happened in a unique way and we dedicate this victory to God and the people of Anambra who believed and gave us their mandate.

“We will never take for granted the resilience, commitments, and actions of the various federal institutions that worked so hard to see us to this day.

“I won’t fail to mention the presidency, security agencies, and INEC for insisting on a level playing field as well as the judiciary for standing on the path of integrity.

“I believe that a sound and credible electoral system is foundational to having an accountable, responsive, and developmental state.

“So, I believe that INEC is getting better by the day. I also believe that the Bimodal Voter Accreditation System, deployed, if refined, will give us that desired Eldorado in our electoral system,” he said

The state INEC Resident Electoral Commissioner, Dr Nwachukwu Orji in his remarks said the commission had done its best to deliver credible election and also promoted the image of INEC.

Orji who was represented by Mr Chima Duruaku, Administrative Secretary of INEC, commended the people of Anambra for the maturity displayed before, during, and after the election.

“The calming of the storm that was raging very hard was divine and on a human level, the commission was resolute to put in a lot of sacrifices, efforts, and innovation to deliver.

“The support of the security agencies, the National Youth Service Corps, and the military contributed to the success that we celebrate today.

“We also commend the peaceful conduct of political parties in spite of the doomsday prediction and the singular resolve by the Anambra people that the election must be done, ” he said.

Soludo, the candidate of the All Progressives Grand Alliance in the November 6 poll scored 112,229 votes to defeat his closest contender, Valentine Ozigbo of the Peoples Democratic Party who scored 53, 807 to emerge second.