Soludo: I’ll Hit the Ground Running with My Agenda 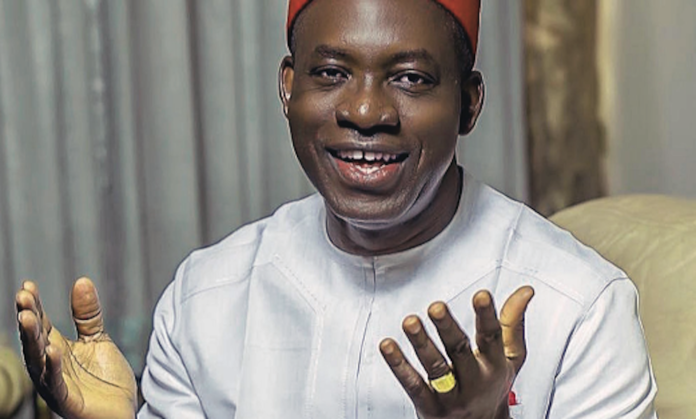 Anambra State governor-elect and candidate of the All Progressives Grand Alliance (APGA), Professor Chukwuma Soludo, yesterday unveiled his agenda for the state on the ARISE News Channel, in his first post-victory television interview. Soludo promised to run an all-inclusive government that would focus on problem-solving and value addition to the state.

In the interview with the broadcast arm of THISDAY Newspapers, shortly after he was declared winner of the governorship election by the Independent National Electoral Commission (INEC) yesterday, Soludo pledged to hit the ground running and demonstrate quality leadership at a fast pace.

He said he would pursue peace and unite the people in order to bring the much-needed value to the state.

Soludo was declared winner of the November 6 governorship election after polling a total of 112,229 votes to defeat his closest rival, Valentine Ozigbo of the Peoples Democratic Party (PDP), who scored 53, 807 votes to emerge second. Andy Uba of the All Progressives Congress (APC) got a total of 43,285 votes to emerge third, while Ifeanyi Ubah of the Young Progressives Party (YPP) came fourth with 21,261 votes.

The Returning Officer for the 2021 Anambra State governorship election, Florence Obi, announced the final results in the early hours of Wednesday at the INEC headquarters in Awka.

Not unexpectedly, National Chairman of APGA, Chief Victor Oye, who also spoke on Arise News Channel, said he had started receiving calls from some of those, who had defected to other political parties at the heat of the election, but were now willing to return. Oye said the party would welcome them back if they showed sufficient remorse and true repentance.

Meanwhile, congratulatory messages have begun to pour in for Soludo, with President Muhammadu Buhari, not only congratulating the governor-elect, but also saying he looks forward to working with him in the collective interest of the country.

Equally identifying with the former Governor of the Central Bank of Nigeria (CBN), were a former national publicity secretary of the PDP, Chief Olisa Metuh; former presidential hopeful and chieftain of the ruling All Progressives Congress (APC), Mr. Gbenga Olawepo-Hashim; and governorship candidate of Young Progressives Party (YPP), Ifeanyi Ubah, among others.

Interestingly, Soludo’s victory at the just concluded governorship election reverberated in neighbouring Abia State, with a resurgence of hope among the APGA faithful for electoral ahead of 2023.

Speaking to his plans for Anambra, Soludo said, “We have fought a political fight and we have gone to court and now is the time for us to come together to build the state. The incumbent governor wanted me to succeed him among all other contestants, and he worked hard to ensure that APGA won the election.

“Now that APGA has won, and the governor-elect has emerged, it is time for us to work as a political party and also extend our friendship to other party members in the state, in order to build the state.”

He said anyone willing to support the state would be welcomed, saying, “It is about bringing value to the people and I will work with those who will bring value to the people, and turn Anambra State into an industrial hub that we all envisage. I will reach out to them in the ‘Anambra Spirit’ in order to develop the state together.”

“When I was Central Bank Governor, I gave responsibilities that had to do with trust and integrity to the women, and they never disappointed me. Anambra has a youthful population and I will not discriminate between gender in my administration, and, above all, my manifesto is a youthful manifesto.”

Soludo assured the people of Anambra State that anybody with useful values to offer would be engaged to do so.

On the transition process and how he would run the state after the swearing-in ceremony in March next year, Soludo said he had some experience in governance in the past, having managed huge bureaucracies with six parastatals, long before becoming Governor of CBN.

He stated, “I have understanding of a few things on how government and institutions work, and the bureaucracy in governance. Again, my governorship will be a continuation of APGA government, so, I expect a very seamless transition process and good governance.”

Soludo said he would not have begrudged anybody if he had lost the election, but would simply have thanked God.

According to him, “In 2010, I was conscripted to run for election in Anambra State, and when I lost the election to the former governor, I congratulated him two hours after INEC declared him winner of the election, and I walked away after the thanksgiving service. Also in 2013, I was disqualified from contesting the election under APGA and I did not leave the party because of my disqualification. But I remained in the party and still supported the party.

“I have persevered after loosing election twice in the state, and I believe this is the right time that God Almighty has planned for me to emerge as winner. Now is the time for me to serve the people of the state and I see it as a divine journey for me, and I am grateful to God and to all the people of Anambra State, including the judiciary, and President Muhammadu Buhari.”

The former CBN governor believed his victory was divine, stressing that he would not be overwhelmed by his triumph at the poll. He said his focus would be the enormity of the work ahead of him as governor.

“The first election that APGA won was in the South-east, and we will continue to work hard as progressives to stretch our winning strategies to other states across regions,” Soludo said.

On his part, the APGA national chairman, while speaking on moves by defectors to return to the party, explained, “For me, people disagree to agree. You mentioned the deputy governor, nobody did anything to him. He just chose to embark on an adventure.

“What do you expect will happen to him? He will crash and end up blaming the building or the builder. All those people that left without justification, they went on sheer adventure, and some of them have been calling to return to the party. For me, they can come back if they show sufficient remorse, because APGA is a party for all of us.”

President Muhammadu Buhari, while rejoicing with Soludo, enjoined him, as a member of the Presidential Economic Advisory Committee, to rally other stakeholders to tackle the challenges confronting the state and the South-east, in general.

Buhari, in a release by his media adviser, Femi Adesina, added that he looked forward to working with the incoming governor for the peace, security, and development of not only Anambra State, but the entire country.

The president also praised the security agencies for their determination to ensure that the election went on as smoothly as possible. He commended INEC for the successful conclusion of the exercise, despite the initial challenges encountered.

Democracy is the real winner – Fayemi

Fayemi said the Anambra election attested to Buhari’s sincerity and commitment to delivery of a free, fair, and credible electoral system. The Ekiti State governor said democracy was the real winner at the Anambra election, with the successful and peaceful conduct of the poll.

In a statement by his Chief Press Secretary, Yinka Oyebode, the governor said the will of the people of Anambra State, expressed through the ballot box, had prevailed. He hailed all stakeholders, including the electorate, INEC, security agencies, election observers, political parties, and their agents for working together to deliver an election devoid of violence.

Fayemi praised the people of Anambra State for their perseverance and tenacity in participating in the poll, despite some technical hitches that were recorded, and ensuring that their votes counted.

Saraki congratulated Nigerians, particularly, the people of Anambra State, for the success of the governorship election. He advised the people not to allow the crucial lessons, which the results of the election signified, to go unnoticed or be ignored.

In a statement by the head of his media office, Yusuph Olaniyonu, the former senate president commended the stakeholders and others, who initiated and participated in the dialogue that created the peaceful atmosphere for the election.

He praised the security agencies for the diligence and professionalism displayed by the officers and men on duty. He also lauded INEC for the successful deployment of technology to improve the election process, particularly, the adoption of the Bimodal Voter Accreditation System (BVAS) and electronic transmission of results.

Saraki said, in the statement, “The Anambra State electorate has taught the rest of Nigeria a lesson about the need for people to vote according to their conscience, to conduct polls devoid of violence, and stand firm in defence of our votes.

“All stakeholders also have to work on the issue of vote-buying. It is a problem, which we must find a solution to, otherwise, it will continue to undermine our democracy. These are some of the lessons from Anambra State, which must not be ignored.”