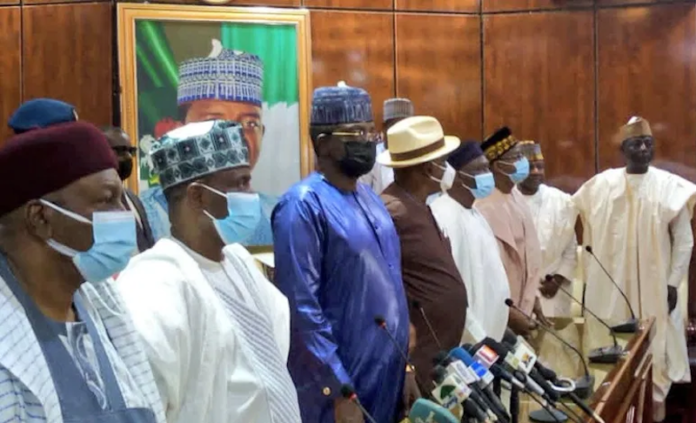 From all the events that led to the build-up to the national convention of the Peoples Democratic Party (PDP), it is obvious the 13 governors – Rivers, Enugu, Delta, Akwa Ibom, Edo, Bayelsa, Abia, Benue, Oyo, Bauchi, Sokoto, Taraba, and Adamawa – as well as the Deputy Governor of Zamfara State, have taken full control of the main opposition party.

The governors dictated who got what in the party’s new National Working Committee (NWC) which was decided at the October 30 – 31 national convention at the Eagles Square, Abuja.

To demonstrate their keen interest in the issue of leadership of the party, all through the night of Oct 30 – 31, the governors stayed put inside the State House box of the arena to direct affairs. They did not sleep as they continued to banter and exchange notes while giving instructions from time to time.

This was unlike before when governors after the opening ceremony would leave, then return to cast their votes and leave again before coming for the announcement of the results. This time they remained at the Eagles Square. With their presence, they were able to sustain interest in the proceeding at the convention ground.

A commentator who observed the interest of the PDP governors indicated that “this time around, PDP governors are showing that they are dyed-in-the-wool politicians. With this corps of governors, it will be difficult for the 2023 elections to be blatantly rigged or manipulated against the opposition by the ruling party and its cohorts. These governors will defend their turf and the party’s votes”.

The governors ensured their loyalists were nominated for the key posts and they achieved consensus for most of the posts where they are directly involved.

In the three cases which have to be decided by voting, deputy national chairman (south), national youth leader, and national auditor), the candidates on the unity list drawn by the governors still won.

The only non- serving governor who produced a high-ranking party official is former Senate President, Dr. Abubakar Bukola Saraki whose candidate, Kamal Adeyemi Ajibade, SAN, is the National Legal Adviser. Ajibade is the first senior advocate to be elected into that office in the history of political party administration in the country.

The governors probably conceded the crucial position to Saraki who himself is a former governor and one-time chairman of the Nigerian Governors Forum because of the respect they have for him and the good relationship he maintains with all of them.

The implication of all these is that the PDP governors will most likely also decide how the presidential candidate of the party for the 2021 elections will emerge next year and who he will be.

The governors displayed cohesion, focus, unity, dedication, and camaraderie in the manner they execute the election of the new NWC of PDP.

It is believed that they are doing this for a purpose. The ultimate end is to decide the presidential flagbearer.

From the interaction and body language of the governors, two options are likely to be considered by the governors. One is to make one of them the presidential candidate or to produce a candidate who though might not be a serving governor but must be in their age category or one of their peers. They sure want a candidate who they can relate with when he emerged as president and who will not feel too big or paternalistic in his disposition towards them.

It now depends on the criteria the governors want to look for and how solid they want the ticket to be in 2023. However, before the decision time, a lot depends on how the Iyorchia Ayu-led NWC can manage the gains made by the opposition party in the build-up to 2023.

Meanwhile, barely a day after the Peoples Democratic Party (PDP) concluded its National Convention for election of its National Working Committee (NWC), facts have emerged about how former Vice President, Atiku Abubakar and two former Senate Presidents, David Mark and Bukola Saraki declined an offer by governors of the PDP to ask an aspirant for the position of Deputy National Chairman (South), Prince Olagunsoye Oyinlola to step down his ambition.

A source confided in THISDAY that on the day of the convention, governors of the party had approached the trio of Atiku, Saraki and Mark to impress it on Oyinlola to step down his ambition, and endorse the governors’ consensus candidate in Ambassador Taofeek Arapaja.

According to the source, the three leaders, all from the Northern bloc of the party declined the offer given to them by the governors on the ground that the issue at stake was of concern primarily to the Southwest and for which they would not want to be involved.

At the convention, the position of Deputy National Chairman (South) that was keenly contested between ,Ambassador Taofeek Arapaja, was declared winner after polling 2,004 votes at the party’s convention. Arapaja’s contender, Prince Olagunsoye Oyinlola, garnered 705 votes.

The source that spoke to Thisday at the intrigues at the convention, said, “It is true that the governors tried to activate the consensus option in the contest for the position of Deputy National Chairman (South). Three leaders were approached to impress on Oyinlola to step down. Atiku, Saraki and Mark to be precise. But the three of them initially declined the offer, saying that they will not want to get involved in a matter that concerns the Southwest.

“But eventually, they yielded to the governors and approached Oyinlola who was adamant on going to the election. At that point, there was nothing anyone could do about the situation,” the source said.

Oyinlola is a former governor of Osun state and a former Secretary of the main opposition party, while Arapaja who was the consensus candidate of the governors was a former deputy governor of Oyo State and was promoted chiefly by the Oyo State governor, Engr. Seyi Makinde.

When contacted, a media aide to Atiku, Paul Ibe said that he was not in a position to comment on what happened at the convention ground, but remarked that, “His Excellency Atiku Abubakar didn’t have any preferred candidate and it goes without saying that he is very comfortable with the successful outcome of the convention. No one believed that the PDP could pull such a successful convention and now that the new leadership has been elected, the party is stronger for it.

“It is a win-win outcome for every member of the party and it is only good that the party consolidates on the gains that it has recorded now and set machinery in motion to begin the process of rescuing Nigeria from the current ruins that the APC has made of the country.”

SWAGA mobilising to save APC from defeat – Adeyeye