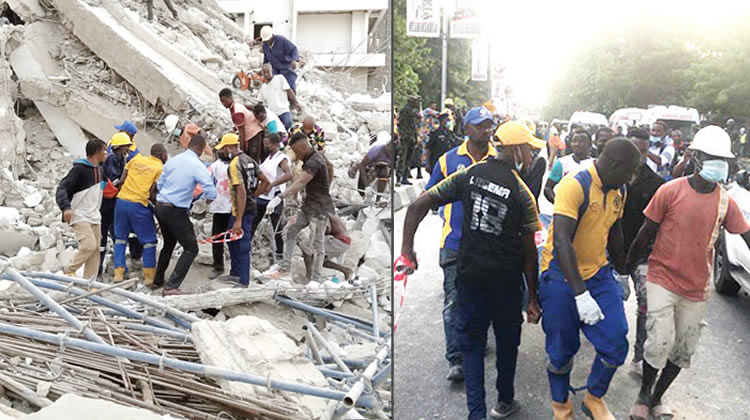 The death toll in the 21-storey building that collapsed on Monday on Gerrard Road, in the Ikoyi area of Lagos State, has increased to 21.

The building crumbled around 2pm when workers were on the site.

PUNCH Metro had reported that many people were trapped in the rubble, including the Managing Director, Fourscore Heights Limited, Mr Femi Osibona, who owned the building.

The state Governor, Babajide Sanwo-Olu, who described the incident as a national disaster, on Wednesday, confirmed that 21 persons were brought out dead from the rubble.

Some families searching for their loved ones on Wednesday lamented that they were denied access to the Mainland Hospital mortuary, Yaba, where the recovered bodies were taken to.

A man, Jude Ogochukwu, who complained about not being allowed to identify his relation, said his family needed early closure.

A father, Edward Godwin, who noted that his 18-year-old son was also trapped in the rubble, said he came from Abuja to look for him.

He said, “I came from Abuja this morning (Wednesday); my son is one of the victims, an 18-year-old boy. I got a call about this around 10am yesterday (Tuesday) and I started coming down immediately and ever since I got here, I was directed to the IDH, but they didn’t allow me to check whether my son was alive or dead. I’ve been to the general hospital, but I was not allowed to see anyone.”

Another man, who claimed to have taken 10 people to the site, said he had only been able to see one body.

He said, “I brought 10 people to this site on Monday; my brother, my wife’s brother and others. But I have  only been able to see one body out of the 10 people.”

A pastor with the Redeemed Christian Church of God, Omotosho Emmanuel, told PUNCH Metro that a colleague, Ola Ogunfuwa, and 22 others from the Ibafo area of Ogun State, were also trapped in the rubble.

Ogunfuwa, who is the pastor of the RCCG, Living Water Parish, Ibafo, was one of the engineers at the collapsed building.

Emmanuel said Ogunfuwa came with the 22 artisans when he was told that workers were needed on the site.

He said, “I am here this morning because one of my pastor friends is working here; he is an engineer. He came with about 22 people all the way from Ibafo to work here; labourers, bricklayers, welders, about 22 different guys that came together with him to work just to make sure the project is completed. They talked to him that they needed workers and he brought those guys.

“Up till now, out of those that have been rescued, we’ve not seen any of those 22 and he is still there because we learnt that at break time, he came out to eat but as he was about washing his hands to eat, he was summoned by one of his bosses and he went back inside. Not up to five to 10 minutes later, the building collapsed and he was trapped.

“He is still there now and we pray that God will have his way upon those that are still there. As a church, we prayed all through yesterday night just to make sure God have his way and we’re still believing that there is nothing God cannot do because we know that people are still many there, they said they are over 50.

“The ones they’ve rescued are not up to 10; definitely we are still expecting more people to be rescued.”

The suspended General Manager of the Lagos State Building Control Agency, Gbolahan Oki, on Monday, stated that the collapsed structure was approved as a 15-storey building, and not 21.

But the Deputy Governor of Lagos State, Dr Obafemi Hamzat, while countering Oki’s claim, stated that 21 storeys were approved.

However, as the rescue operation entered day three, a new document emerged on Wednesday, showing that the Lagos State Government approved 15 storeys for the company.