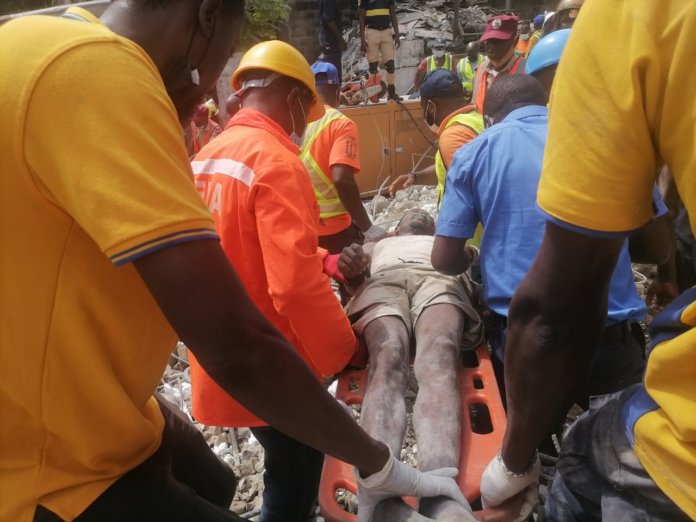 As rescue efforts intensify to try to pull out more persons from the debris of the 21-storey building, which collapsed at Ikoyi, Lagos, on Monday, Governor Babajide Sanwo-Olu in the wee hours of today visited the scene of the incident. He had earlier ordered the indefinite suspension of General Manager of the Lagos State Building Control Agency (LASBCA), Mr. Gbolahan Oki.

Sanwo-Olu, furious at the building tragedy arrived the site around 1.am this morning and encouraged all federal and state agencies involved in rescue operations.

Earlier yesterday, the governor said an internal panel of enquiry had been set up to look into the role of government officials in charge of ensuring adherence to standards with respect to the collapsed property.

The death toll from the building collapse rose to 19 on Tuesday, though nine persons were pulled out alive from the rubble.

The Inspector-General of Police (IGP), Mr. Usman Baba, visited the scene of the building collapse on Tuesday.

Minister of Humanitarian Affairs, Disaster Management and Social Development, Sadiya Umar-Farouq, was also at the site on Tuesday. Umar-Farouq directed the immediate mobilisation of the National Emergency Management Agency (NEMA) team from the Lagos Territorial Office to assist in the rescue operation at the site, as she condoled with the state government.

Speaker of the House of Representatives, Hon. Femi Gbajabiamila, also expressed his sympathies to the government and families of victims of the building collapse.

But barely 24 hours after the collapse of the 21-storey building in Ikoyi, another building under construction collapsed in the neighbouring Lekki area yesterday. At the time of filing this report, it could not be ascertained if there were casualties. But first responders were mobilised to the site of building located at Osapa London, a highbrow area of the state.

The nine persons rescued from the debris of the Ikoyi building collapse on Tuesday – all men – were taken to the hospital for treatment.

“Unfortunately, 17 others were brought out dead, as at 2 pm,” the state government said in a statement. The government said more equipment and personnel had been deployed at the site to try to save more lives.

The statement signed by the Commissioner for Information and Strategy, Mr. Gbenga Omotoso, disclosed that the government had set up an independent panel to probe the collapse of the high-rise building. It said members of the panel were drawn from the Nigerian Institute of Architects (NIA), Nigerian Institute of Town Planners (NITP), Nigerian Society of Engineers (NSE), and other relevant professional bodies.

“It will independently investigate the remote and immediate causes of the incident and make recommendations on how to prevent future occurrence,” the statement added.

However, the statement said the investigation was not part of the internal probe already being conducted by the government.

Sanwo-Olu promised that the government would surely find out what went wrong and punish those indicted.

The governor thanked all first responders and those who joined the rescue efforts, including construction giants Julius Berger, Chinese Civil Engineering Construction Corporation (CCECC), and NEMA.

Omotoso said a help desk would be set up at the site for people seeking information about their relations who might have been involved in the incident. But he told the media that the government would be releasing information whenever the need arose to avoid sensational reporting of the unfortunate incident.

The deputy governor, Dr. Obafemi Hamzat, was at the site of the collapsed building yesterday to encourage rescuers and comfort relations of those trapped in the rubble. Hamzat also visited the Lagos Island General Hospital to see the survivors.

The state government said it would embark on further foundation and borehole acidic level tests to ascertain the effect of the collapsed building.

The government said, “These tests, particularly the borehole acidic level, is important for the entire Gerrard Road and adjoining areas.

“We wish to state that there will be no cover-up in the search for the truth in this incident. If anybody is found to have been indicted, he or she will face the law.

“It is important to restate that all developers and property owners are required to adhere strictly to all Building Codes and Planning Regulations to ensure the safety of lives and property. Those who ignore such regulations, breaking seals and defying enforcement, will surely be prosecuted.”

Minister of the Ministry of Humanitarian Affairs, Disaster Management and Social Development, who visited the scene of the Ikoyi building collapse on Tuesday, condoled with the state government.

Umar-Farouq said, “This is tragic. I sympathise with the Lagos State government and families of people still trapped inside the rubble.

“We have mobilised immediate rescue operations through the NEMA team from the Lagos Territorial Office to team up with the state SEMA. NEMA has also facilitated the mobilisation of response involving heavy-duty equipment for rescue operations and security for crowd control.

“We pray that through the rescue operatives still on the ground at the site, many of those trapped will be rescued.”

The IGP came to the compound with an entourage of police cars and heavy security.

Gbajabiamila, in a statement yesterday, consoled with families of the victims, saying he shares in their grief. He also sympathised with the government and people of Lagos State over the unfortunate incident.

The Speaker called for adequate measures to forestall future occurrence, while urging the relevant authorities to double their efforts at rescuing those trapped in the multi-storey building. He added that it was unfortunate the building collapse happened at a time the Lagos State government was doing everything possible to make the lives of Lagosians safer.

The Nigerian Red Cross Society called on emergency rescue response agencies to speed up efforts to rescue more persons who may still be alive. Chairman of Nigerian Red Cross, Lagos State branch, Adebola Kolawole, said yesterday that the rescue teams should act quickly to recover people from the rubble.

Kolawole said, “They should do something fast; as fast as they can, because time is limited. If they don’t bring them out, they will be suffocated and they will eventually die. We don’t pray for that. We pray that God will bring them out and our own.